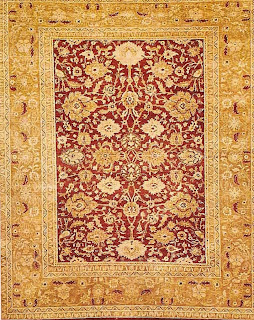 HANOVER, April 3, 2009 -- Ever since Afghan refugees in Pakistan began having success in the late 1980s with their modified Ziegler designs (left), they've been mercilessly imitated by other producers.

Nowhere is that clearer than at trade fairs such as this year's Domotex in Hanover, Germany (January 17-20). The halls of the fairground were filled with Zieglers, familiarly called Chobis, but only a portion of them were made by Afghans.

Small wonder, then, that Afghan weavers -- whether they remain in Pakistan or have returned to Afghanistan -- keep searching for something new. And increasingly, where they are going is in the direction of subtler, small-scale floral designs that look very different from the Chobi's previous bold patterns.

Colors, too, are changing. After starting out with simple contrasts of burgundy and white, and then experimenting with darker shades including browns, blacks and gold, the Afghan designers now are exploring an ever broader spectrum of hues.

The only thing not changing is the Chobi's original and still greatest strength: soft vegetal dyes. Indeed, it is from the Turkmen word for wood -- one of the main dye sources -- that the name "Chobi" derives. 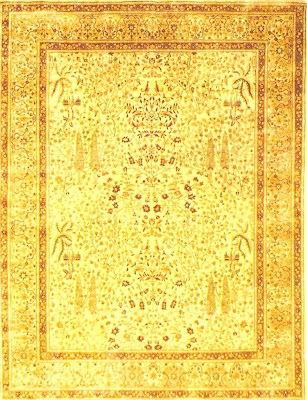 Here is one of the new Ziegler designs shown by Afghan weavers at the Domotex show. It made it to the semi-finals in the awards competition for Best Traditional or Nomadic Design under 150 euros/square meter.

The judge's positive appraisal augers well for the future success of the new Ziegler designs. At the same time, it shows how self-confidently Afghanistan's commercial carpet industry is returning to the world stage after decades of disruptions.

The carpet is made by Kabul-based Hali Weavers, which calls it 'Mahal," or Palace. It is 3.6 meters x 2.6 meters, with 300 knots per square inch, and was woven by Oraz Geldi, a master weaver in Aqcha, northern Afghanistan.

Aqcha, like the other carpet centers of Andkhoy and Shibergan, is in the heart of the Ersari Turkmen belt, a famous weaving area for generations. In recent years, thousands of Turkmen weavers who fled as refugees to Pakistan during the Soviet-Afghan war and the subsequent civil wars and Taliban era, have returned to the region.

As they come, they have brought back the Chobi techniques pioneered in the Pakistani refuge camps and turned the northern Afghanistan into a major center for Chobi production. (See: In Afghanistan's Turkmen Rug Belt, It's Tradition vs. Globalization).

All this has helped make Afghanistan's carpet industry boom. By some estimates, carpets now account for a full 60 percent of the country's exports (not including illegal opium poppies). They are followed by dried fruit, fresh fruits, leather, marble and other stones.

But carpet producers say the industry still is far from being as big a revenue earner for Afghanistan as it could be. The vast majority of carpets still go to market via Pakistan, where they are marked 'Made in Pakistan' and where a large portion of the profits are siphoned off by brokers and shippers. 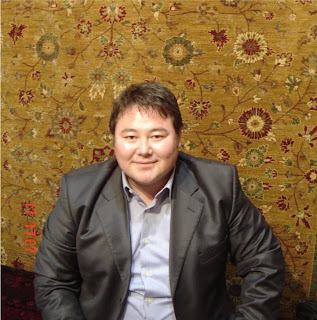 Raaz Hassan, an owner of Hali Weavers, is one of some 40 Afghanistan-based producers who came to the Domotex show. The delegation was sponsored by USAID, which is investing in helping the domestic industry make market contacts abroad.

What is needed to make Afghanistan a carpet powerhouse in its own right again? Hassan has two recommendations.

First, he says, the Afghan government needs to negotiate with more international air freight carriers to fly directly to Kabul. Currently, the state airline Ariana carries carpets at 60 cents per kilogram -- half the usual private cargo rate -- to Dubai. But its capacity is limited.

Second, he says, the government should introduce a rebate system like that used in Pakistan to financially reward producers for each carpet they export. He notes that in 1990 the Pakistani rebate was 18 percent and that helped boost export production so much that the government has been able to draw the rebate down to almost zero today.

"Pakistan grew its carpet industry into a major hard currency maker for the country," Hassan says. "But our government does not understand that logic."

He says Kabul almost ignores its export sector as officials concentrate on taxing imports at a rate of 5 to 20 percent instead. "They are content to collect the low-hanging fruit," he observes.

Meanwhile, Hassan estimates that 95 percent of Afghan weaving goes out to the world through Karachi or, more recently, Iran's port of Bandar Abbas. Not a happy situation but also, perhaps, not a permanent one.

An Analysis of Business Opportunities in Afghanistan's Carpet Sector, 2007

Hali Weavers
Posted by Tea and Carpets at 00:56

my understanding is that the label "chobi" (wood) derived from the browned-out antique wash given these rugs. Wood is not a dye source to my knowledge-nor are 90% of these chobi rugs, producers claims notwithstanding, vegetally dyed.

By the way how much is that kinds of Carpets? I really like the design of the carpets.

Amazing rugs, the designs and the colors are just so good.

wall to wall Carpets in Dubai are one of the most beautiful ideas for interior décor. A carpet spread with the right color combination blends beautifully with the surroundings making the entire area colorful and vibrant. So it entirely depends on your choice, choosing a brighter shade adds colors to the room and the dull ones, shade. Carpet Flooring Dubai offers the widest range of beautiful carpets customized according your required dimensions, colors and designs. Fo rmore details:http://www.carpetsdubai.com

This blog is really amazing. The design of Ziegler rug is amazing. Keep up your great work.