Pierre Loti: When Oriental Carpets Are Not Enough 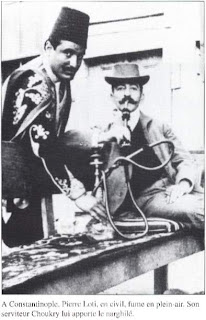 ROCHEFORT, France; June 20, 2008 -- Many non-French speakers hear of Pierre Loti for the first time when they visit Istanbul

That is partly thanks to the café that bears his name on a hill overlooking the Bosphorus. The veranda and interior are said to have changed little since the French traveler and writer went there at the turn-of-the-last century to smoke the narghile and gaze at his favorite city.

There is the story, for example, of Loti and Sarah Bernhardt. When Loti wanted to meet the famous actress, he had himself rolled up in an oriental rug and delivered to her door by two men dressed in Arab costume. When he rolled out of the carpet, she was so surprised that they quickly became good friends.

And there is his book ‘Aziyadé,’ first published in 1872. It chronicles the doomed love affair of a young British officer, named Loti, and a Circassian concubine of a Turkish merchant in Salonica. The two flee to Istanbul until finally they are separated by the pulls of their different worlds. 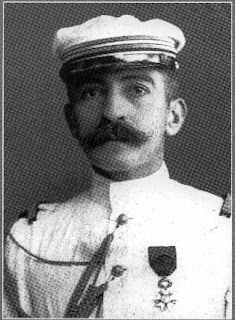 "I swear to you, Aziyadé," Loti tells her, "I would give up everything with no regrets, my position, my name, my country. As for my friends, I have none and I don’t care. But you see, I do have an aged mother."

How much of the tale is autobiography, how much fiction, no-one knows. But Loti maintained for the rest of his life that his one true love was Aziyadé and that she died of heartbreak before they could meet again.

Loti was perhaps the last great French writer of Romanticism and – sailing with the French fleet – took the genre to settings it had never seen before.

His novels and travelogues explore the Ottomon Empire, Japan (his book 'Madame Chrysanthemum' is the forerunner of Madame Butterfly), Polynesia, Morocco, Iran, China, Egypt and Iceland. What his stories had in common is a longing for the exotic, a world-weariness with European bourgeois life, and immense appeal for bourgeois European readers. 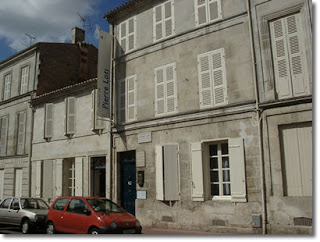 But Loti, who was a member of the Academie Francaise and both admired and ridiculed in his day, reserves his greatest surprise for visitors to his rather ordinary looking home in Rochefort, on France’s Atlantic coast.

From his voyages, he brought home immense quantities of momentos. Gradually, they began to overfill his ancestral home until, as he grew richer, he bought the neighboring house and connected it to his own.

Then, he began refashioning the interior into a whole series of rooms that conjured up the exotic world of his books and, he said, inspired him to write more.

The most amazing room is a full, operetta-stage replica of a mosque. To construct it he purchased a fire-damaged mosque in Damascus that was about to be pulled down and had it shipped in its entirety to France accompanied by a team of Syrian masons. 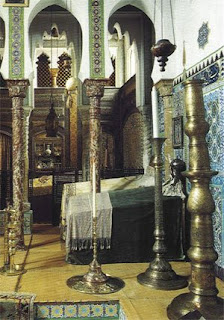 The mosque is complete down to a Turkish multi-niche prayer rug, or Saff, and is adorned with a giant gravestone from an Istanbul cemetery. Loti said it was the stele from Aziyadé’s grave site.

By his own account, he spent hours in these rooms – which also include a fully furnished Turkish salon -- dreaming of lost love.

“I spend a lot of time at home, they are the hours of calm in my life, and smoking my narghile I dream of Istanbul and the lovely limpid green eyes of my dear sweet Aziyadé.” 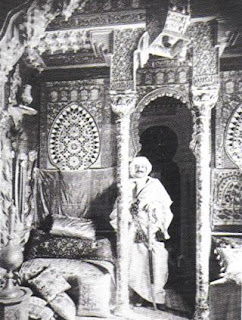 At the same time, Loti loved to give parties and he dressed himself and his servants for the occasion – in Arab or Turkish robes.

Was Loti mildly eccentric? That would be an insulting understatement. He was massively and joyously, but also wistfully, out of step with his rapidly modernizing and Euro-centric world.

During his travels in Morocco, he wrote ecstatically of places that Western influence had yet to reach and, at the same time, described what he knew was doomed to disappear. The clarity, detail, and color of his writing won the admiration of painters such as Matisse and writers including Marcel Proust.

Today, a quick browse through the Internet shows Loti available mostly only in French and Turkish and long out of print in English. But his house – now a museum – is an open invitation to follow him home and, from there, still further home to the farthest corners of the East.

‘Pierre Loti – Turcophile’ (French)
Posted by Tea and Carpets at 10:39

Interesting blogpost, thank you! I bought the English translation of Aziyade in a bookstore in Istanbul not long ago and enjoyed it. Here is my review in case you are interested: http://www.mytwostotinki.com/?p=621