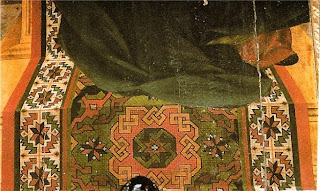 ISTANBUL, January 1, 2010 - The geometric patterns of the Anatolian carpets that so fascinated European painters have diverse origins.

Some of them come from nomadic weaving traditions, such as the Memling gul. It is easy to weave and, unlike more sophisticated designs, has a flat, two dimensional appearance. It can be found in nomadic traditions ranging from Central Asia to the Transcaucasus to Iran and Anatolia.

But other motifs, especially those which appear to be three-dimensional (such as the medallion above), are so complicated they likely were borrowed from other fields of art.

The search for their origins takes one into the sophisticated world of Islamic decorative art and specifically, into the drafting rooms of court and commercial artists who created the complex designs and patterns that can be seen in the tile work of mosques and other buildings or in book illustrations.

One of the art forms such designers took to particular heights was ‘strapwork,’ the use of interlacing lines to give patterns an illusion of depth. The example at the top of this page is from a rug depicted in an Italian fresco from the early 1500s. 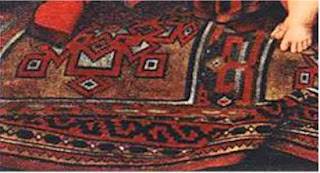 Shown here is a much rarer and more elaborate version of a strapwork medallion on a Large Pattern Holbein. It is depicted in the painting 'Virgin and Child with the Family of Burgomaster Meyer," by Hans Holbein the Younger in 1528.

Strapwork, also known as “girih” (the Persian word for knot), is a common design trick in both European and Islamic artwork. But eastern artists, who were particularly interested in geometric shapes, took it to levels of enormous complexity.

Just how complex it could be is only hinted at in carpets. But it is worth taking a moment to consider just for its own interest. 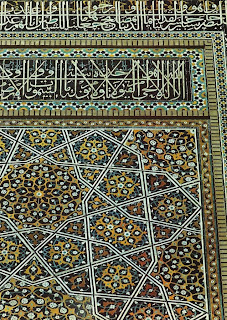 Here is an example of girih used to decorate the exterior of the restored Khanqah (lodging complex) of Nadir Divan Beg, dating to the early 17th century, in Bukhara, Uzbekistan.

The secret to understanding girih, which was meant to both delight and confound the eye, is understanding how the artisans created their designs.

They assembled them from jig-saw puzzle-like pieces, which could be combined with one another to generate an almost infinite variety of different patterns. 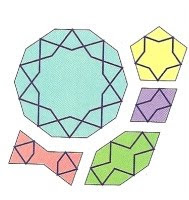 Here are five “ghiri tiles” representing different categories of puzzle pieces. They consist of a decagon, a pentagon, a hexagon, a bow tie, and a rhombus and all the sides of each are are of the same length, so any can fit together with the others.

The shapes of the girih tiles are not visible in the final design. What one sees are the patterns formed by the line decoration on the tiles.

How to create girih designs was a whole field of study that was codified in manuscripts of the time. 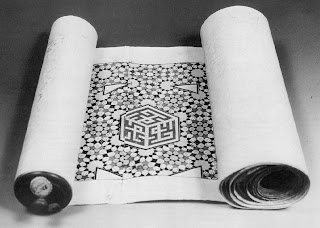 One such manuscript is the ‘Topkapi Scroll,’ a 15th century collection of architectural drawings created by master builders in the late medieval period in Iran.

The scroll, preserved in the Topkapi Palace complex in Istanbul, contains 114 individual geometric drawings detailing the theory and instructions for laying intricate patterns on walls and vaulted ceilings.

Both this picture and the one above are from ‘Medieval Islamic Architecture, Quasicrystals, and Penrose and Girih Tiles: Questions from the Classroom,’ by Raymond Tennant.

With time, every art form begins to experiment with stylizations, some of which try to turn the art form inside out.

In girih, this took the form of sometimes drawing designs by representing only the interstices where certain lines met. The lines themselves were dropped from view. 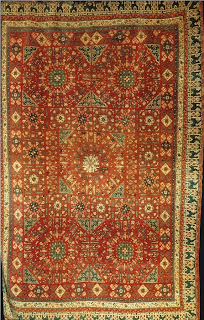 An example in carpets is this para-mamluke rug. It is not Anatolian but Syrian in origin.

With large-scale tile work on buildings, the effects of showing only certain interstices could be still more dramatic. The results resembles stars in the night sky, but arranged in subtle patterns that the brain perceives almost subconsciously.

There is no room here to discuss a kind of girih that never appears in carpets and is the most complex of all.

That is designs made up of shapes which, when put together, create a pattern that does not repeat itself, no matter where one looks. Moreover, the shapes cannot be re-arranged in any way that makes the pattern repeat.

The existence of shapes which can do this has only recently been identified by modern mathematicians, who still have difficulty modeling the phenomenon.

The fact that such shapes were being applied in art more than 500 years ago – with or without full understanding of the geometric laws involved – is a humbling reminder of the achievement of the ‘golden age’ of science in the Islamic world, which itself built upon the science of the classical world. 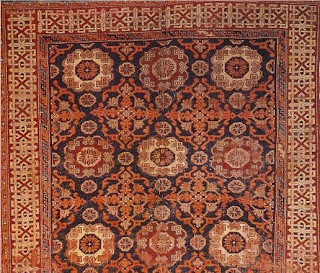 Still another, much easier to understand, motif which appears on Renaissance era Anatolian carpets and is borrowed from decorative tile designs is a motif composed of ‘split leaves.’

The split leaves are known as ‘rumi’ in Ottoman Turkey and “Islimi’ in Persia and can be seen in Small Pattern Holbein rugs (left).

The split leaves are arranged to form a quatrefoil that is the secondary motif in the rug pattern. The quatrefoils alternate with the primary motif, which is the octagonal girih medallion.

What did the split-leaf motif, appears as very angular in these carpets, look like in its original version on tile work?

Here is a sample (right). It is a quatrefoil of four rumi forms embracing a lotus flower and is very curving and lifelike in design. The motif was made angular for carpets to conform with the ‘geometric’ style popular for carpets at the time.

The rumi design, like girih, was subject to much experimentation. One result was what may have been the most popular of all the Anatolian export carpets to Renaissance Europe, the so-called Lotto design.

The Lotto (below), which at first glance looks like an abstraction of the Small Pattern Holbein, has both its motif elements derived from the rumi form. 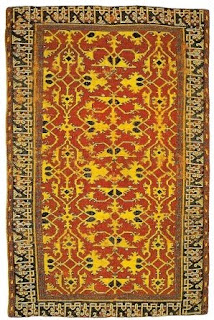 Most frequently it appears in Renaissance paintings as a yellow geometric rumi lattice on a red ground. In fact, it is the most frequently depicted classical Anatolian carpet of all, appearing this way or with variations in some 500 paintings.

This picture of also shows yet another carpet pattern – this time to form the border – derived from still another field of decorative art: calligraphy.

In the ‘kufesque’ border, the calligraphy, which is highly ornate and curvilinear in its original medium of book illustration, is made geometric by the weavers.

The Anatolian geometric carpets were characteristic of carpet tastes across the Islamic world until styles began shifting toward curvilinear and floral patterns in the late 1400s.

Walter B. Denny, writes in “Anatolian Carpets’ (2002) that “it appears that before the phenomenon known as the ‘carpet revolution’ began to dominate carpet production in the last part of the 15th century, the carpet traditions of all these weaving centers may have shared elements of a common design vocabulary of geometric girih motifs, rumi design, and kufesque borders.”

It is interesting to think that while Renaissance Europeans did not import much Eastern art other than carpets, the rugs did offer them a considerable sample of what was going on in the other Islamic arts of the time.

Today, oriental carpets remain the only form of Eastern art that is widespread in Western homes. Often unbeknown to us, it is still a window onto the much larger, and ever changing, world of Eastern design.

Basically,its very important to know the history of carpets, where the culture evolved, what kind of designs were followed by the ancient persons, well thanks for the nice post!! :)

I prefer carpets with Asian designs rather this stuff! anyway awesome stuff!