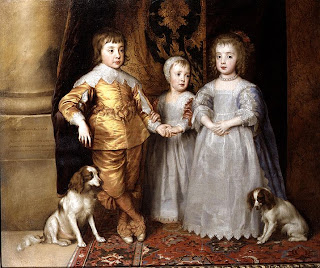 AMSTERDAM, August 7, 2010 – Sometime before the end of the 16th century, Persian carpets – with their signature floral designs -- burst into European interiors.

It was a dramatic entrance and European artists recorded it.

Above is a painting of the children of English King Charles I by Anthony Van Dyck in 1637.

The change of taste was no accident.

This was a time when European seafarers had finally established routine connections with Persia, India, and China.

It was a time, too, when the Safavid Empire was actively promoting the production of luxury export goods, including silk textiles and carpets.

The two sides came together in places like the port of Hormuz, held by the Portuguese and also used by Dutch traders.

So, it is in paintings of wealthy Portugese, Dutch, and Spanish homes by artists such as Velásquez, Rubens, and Vermeer that the newly arriving Persian carpets most often appear.

The Persian floral carpets often had medallions. But many were also of a new type developed in Persia at this time. They were carpets whose whole field was covered with floral and vine patterns with no medallions at all.

Perhaps the most appealing of these were the so-called Vase Carpets, whose flowers were arranged in either real or imaginary vases. Here is one example.

The full-field floral carpets were a huge success in Europe and, like floral medallion carpets, continue to be one of the most popular formats for Persian rugs today.

At the same time, the new design was exported to Mughal India, where it inspired a whole range of similar full-field styles – dubbed Indo-Persian – that were shipped in large quantities to Europe.

Just how successful an innovation the Safavid vase carpets were can be judged by the value modern collectors attach to them.

This year, a vase carpet – with imaginary vases – sold for just short of $ 10 million dollars, the most money every paid for a rug sold at an auction.

The vase carpets were woven in Kirman, whose weavers were particularly innovative during the Safavid era. They developed a special loom setting that gave a wavy finish to the surface of such carpets, adding to the appeal.

European travelers to Persia at this time often remarked on the system of court workshops in cities like Kirman, Isfahan, and Kashan which produced luxury rugs.

Their production reached a zenith under Shah Abbas I (reigned 1587-1629), who was famous for his interest in the arts. Like the earlier Shah Tahmasp, he is believed to have enjoyed designing some carpet motifs himself. 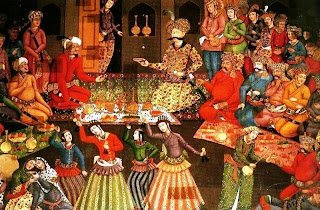 This picture of Shah Abbas is from a ceiling fresco that decorates one of the pavilions in his palace complex in Isfahan.

The royal workshops produced carpets for the palace and mosques as well as gifts for neighboring monarchs and foreign dignitaries.

Some of those gifts, such as a medallion carpet sent to the Doge of Venice, survive in museums today.

So do other priceless carpets that appear to have been commissioned especially from Persian workshops at this time by some European families.

The most famous of the commissioned rugs are the so-called "Polonaise" carpets, such as this one in New York's Metropolitan Museum of Art.

It is a floral carpet with an overlying pattern of compartments formed by overlapping cartouches. The pile is silk, highlighted with gold and silver brocading, all in muted colors.

The carpets were termed Polonaise by 19th century carpet collectors because their origin in Isfahan was forgotten over the centuries.

When, in 1878, a carpet similar to this one was exhibited in Paris, it was widely assumed that the coats of arms woven into the rug were Polish and that the rug was made in Poland.

E. J. Brill's First Encyclopedia of Islam (published 1913 – 1936) notes that the carpets were "erroneously connected with an 18th century workshop in Scucz where brocaded girdles in Persian style were made."

That error may be more understandable than it at first seems.

One reason is that the design of the carpets shows a certain adaption to European tastes – something not everyone would expect of an early 17th century Persian weaving.

But it is interesting to know that as early as 1601 Sigismund of Poland is documented to have ordered such a carpet. And that suggests Persian producers and European customers may have come to know each others' tastes from very early on. 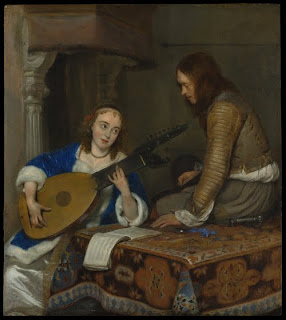 The finely-knotted silk carpets woven in the time of Shah Abbas are rarely represented in European paintings, because – unlike the floral carpets that often made their way into interior scenes - they were doubtless very unusual in European homes.

But at least one painting does exist that shows the kind of ultimate Persian carpet a wealthy merchant family could hope to acquire.

The picture is A Lady playing the Theorbo by Gerard Terborch, in the collection of the Metropolitan Museum of Art. The silk carpet is spread over the table on which the lady's cavalier is sitting.

Could not find your email... I thought your readers would enjoy this:

It looks great; I think both of these rugs look great in there! I've been looking for one similar to that Floral Design Rugs for my living room.

I was pinning away for such type of blogs, thanks for posting this for us.Lags

Your blog is extremely brilliant especially the quality content is really appreciable.Hossein

I continuously continue coming to your website once more simply in case you have posted new contents. Urbandale carpet cleaners

On the off chance that you are looking Carpet Dubai then risalafurniture.ae is the correct decision for this.risalafurniture.ae is a main and proficient ONLINE CARPET SHOP that offers the best cover tile flooring arrangements at moderate rates to its clients.Call Us For FREE APPOINTMENT to look at our Solutions for,Interiors, Decor Works, Exteriors and Fit outs! For more info: http://risalafurniture.ae/

On our regardless of what you look like at it floors pages, you input your estimations or area and our site will reveal to you what number of packs you require and the whole charge of that item.Where to Buy Rugs in Dubai have made a hunting down way like the same. It is by and by less troublesome than at whatever point in late memory to purchase from Carpet Shops in Dubai online the utilization of our procedure. For more data don't dither to click - http://carpets-dubai.ae/

On our regardless of what you look like at it floors pages, you input your estimations or area and our site will reveal to you what number of packs you require and the whole charge of that item.Where to Buy Carpets in Dubai have made a hunting down way like the same. It is by and by less troublesome than at whatever point in late memory to purchase from Carpet Shops in Dubai online the utilization of our procedure. For more data don't dither to click - http://carpets-dubai.ae/

On the off chance that you are looking Carpet Shops in Abu Dhabi then risalafurniture.ae is the correct decision for this.risalafurniture.ae is a main and proficient ONLINE CARPET SHOP that offers the best cover tile flooring arrangements at moderate rates to its clients.Call Us For FREE APPOINTMENT to look at our Solutions for,Interiors, Decor Works, Exteriors and Fit outs! For more info: http://risalafurniture.ae/

Nice collection of carpets. All are looking so beautiful.
Where to Buy Rugs in Dubai

how to watch Logan Paul vs KSI live online in USA, UK, Canada, Australia, Germany and the rest of the world.
What happened in the first fight KSI vs Logan ?

sugar bowl live online. There are two plans for Sling TV. A blue plan and another Orange. Two planes can be taken. It also can be taken separately. However, if you enjoy Sugar Bowl 2020 live streaming online, you can select the Orange Plan. Where ESPN, Disney, and CNN Sling Blue features Discovery, NFL Network, and FX channels.

Your blog is very informative. Thanks for sharing.
handmade rugs for sale