There are many reasons to think so.

The rugs were created during the reign of the Mamluk sultans in Cairo from 1250 to 1517 at a time when medieval Islamic art was at its pinnacle in Egypt.

And it is clear that the sultans spared no expense -- from the painstaking weaving of the rugs’ mosaic-like designs to their saturated colors and their superb wool.

But no-one is sure exactly where these masterpiece workshop rugs were woven. Some carpets experts say Egypt, some Spain, some Turkey.

One of the reasons for considering so many places is that the rugs appeared under the Mamluks as if out of thin air. Elisabeth Greenberg observes in her article ‘Jewelled Carpets: Treasures of the Mamluk Empire’ that “prior to these rugs there was no pile-rug weaving tradition in Egypt.” 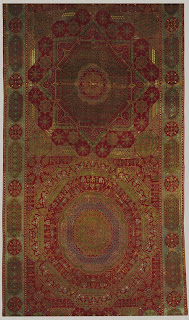 Examining the rugs for clues just offers more riddles. Their lustrous wool is unlike that used in other Egyptian textiles of the time, but doesn’t clearly come from somewhere else. The wool is spun clockwise, when most carpet wools are spun counterclockwise. And, the red dye is obtained from lac – an Indian insect – at a time when master weavers in Turkey and Iran were using entirely different pigments.

That leaves only the carpets’ designs as a guide. These, at least, are consistent with other artworks created under the Mamluks. Thus many experts conclude that the carpets must have been woven in Cairo under the close supervision of the Mamluk court.

As to who the Mamluks were, their story is no less extraordinary. Although they ruled Egypt and Syria, they originally came to the Mideast as slave-solders from Central Asia and the Caucasus. Arab rulers purchased or recruited them as youths from Turkic, Mongol, and Circassian tribes in Central Asia and trained them as elite palace troops.

But the Mamluks revolted and seized power for themselves. And still more surprisingly -- despite a warrior ethos so competitive that, on the average, the Mamluks killed or removed their own leaders every five years – they were huge patrons of art.

When the Mamluk empire fell to the Ottomons in 1517, their distinctive carpets disappeared with them. Today, only one remains in Cairo and the rest of the some 100 or so pieces that survive are the prizes of a handful of top world museums. The images above are of a rug in New York's Metropolitan Museum of Art.

Museums rarely display their centuries-old Mamluks for fear they will be damaged by too much exposure to light. But when the rugs are shown, they always amaze viewers -- just as their designers intended.

The Mamluk’s complex Arabesque patterns evoke the harmony and infinity of the divine. Astonishingly, they do so with patterns that appear both perfectly mathematical and perfectly mystical at the same time. And the carpets literally shimmer before the eyes, making a them appear as much like a vision of a rug as a reality.

Small surprise, then, that some carpet producers today are interested in trying to recreate the Mamluks in whole or part. 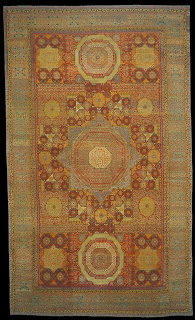 Woven Legends, a Philadephia-based company, has for several years worked with Turkish weavers to try to duplicate some of the Mamluk Rugs in the Philadelphia Museum of Art.

The results – Woven Legends’ ‘Sardis’ line (right) – have won critical acclaim. The retail price is $ 968 per square meter and the rugs come in a variety of sizes and patterns.

The original Mamluk weavers not only produced the complex geometric medallion carpets they are most famous for but also full-field rugs as well. 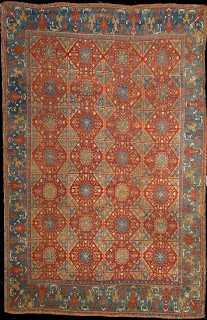 The full-field designs are best exemplified by the so-called para-mamluks produced in Damascus. The rugs are often referred to ‘chessboard’ carpets in Europe and are highly coveted collectors’ items.

This one (left) is from the Textile Museum in Washington, D.C.

Today, the chessboard designs, too, are inspiring some carpet producers to explore new possibilities.

This rug is produced by Afghan weavers, who are among the most innovative designers for the popular market today. 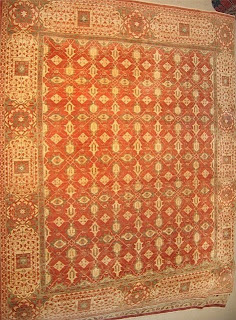 Simply called 'Mamluk' (right), it is offered by Nomad Rugs of San Francisco and has an Arabesque field with cartouche borders – both staples of Mamluk design.

At a price of $ 488 per square meter, it can only hint at the charms of more complex chessboard patterns.

But that may be just where many first-time rug explorers would want to begin.

Jewelled Carpets : Treasures of the Mamluk Empire, by Elisabeth Greenberg

Mamluk Carpets - Legacy of the Conquering Nomads, by Roy Chatalbash

History of Mamluks – The Battle of ‘Ain Jalut

Nomad Rugs of San Francisco
Posted by Tea and Carpets at 23:36

Hi, I'd like to present myself, I'm Italian and my passion and my work are carpets. I have founded the forums infotappeti www.infotappeti.com and I manage a blog similar to this www.tappetorientale.blogspot.com
For this reason I have written,to signal these ones to you and to propose an exchange link.

have a nice nice day

I love this kind of exotic art so much! why you don't post more photos?