But Hamburg is the major entry point for handwoven carpets into Europe and for trans-shipments to America. One third of the world’s carpets move through here each year, along with many more goods from the East ranging from tea to coffee to computers.

For decades, this was best known only to cognoscenti of the carpet trade. But in recent years, enthusiasts have tried to put Hamburg more openly on the rug map. They have succeeded so well that today anyone visiting Hamburg’s port area can learn a lot about the global carpet business, too. 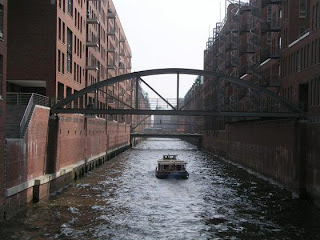 The place to begin is the port’s storehouse area, a sprawling complex of warehouses built along a maze of canals at the turn of the last century. Called the Speicherstadt (Storehouse City), the district is popular with tour boats which carry visitors up the canals to admire the red-brick architecture of the buildings. But the warehouses themselves, despite their yesteryear gables and turrets, are very much a still-functioning depot area.

In the heart of the warehouse complex is a bridge covered with an oriental carpet. There is a sign at each end that warns any ladies who happen to be walking by in high heels to be careful. The reason is not that they might damage the surface of the carpet, but so that they don’t trip on it. 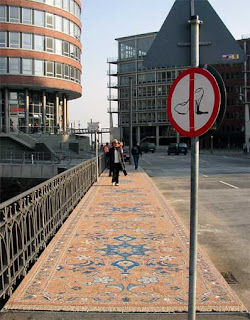 The carpet is made of stone and is the brainchild of German artist Frank Raendchen. He mobilized scores of sculptors, illustrators, students and photographers in 2004 to join him in sticking 1.5 tons of colored stone to the bridge with synthetic resin to reproduce the design of a Persian carpet.

What are the stone carpet’s dimensions? Length: 37.5 meters. Width: 2.45 meters. “Pile” height: 1 centimeter. It is modeled on a real carpet that Raendchen rented for the project for 70 euros from a dealer.

Raendchen says his goal was to turn the warehouse area “inside-out” to show visitors the exotic things stored inside. He says he focused on carpets because “the oriental rug, besides its economic importance and its decorative value, still possesses some of the magical allure of the great wide world.”

The oriental carpet made of stone is not the only way to appreciate the some 3.6 million square meters worth of handwoven rugs that flood in and out of Speicherstadt each year. There are also several museums that tell the story of the port and its exotic trade.

Among these are the Speicherstadtmuseum, with its hands-on exhibits of bales of rubber and coffee sacks, and the Spice Museum, where visitors can see and smell some 50 spices. Both of them are located in original warehouses.

And there is also one very unexpected museum, squeezed between the Spice Museum and a carpet warehouse. It is the Afghan Museum, with displays of rugs and other artifacts. An Afghan carpet salesman founded it in 1998 to remind himself and other Afghans living in Germany of their homeland. Today, it helps to make ends meet by doubling as a venue for catered parties. 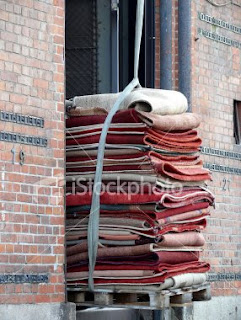 But perhaps the most fascinating thing a carpet lover can see in this sprawling warehouse town is history repeating itself – over and over again.

Despite all the modernization, the warehouse crews still use pulleys to haul pallets of carpets off barges and up to the warehouse windows many stories above the waterline. There the carpets will stay until they are sold to retailers around the Western world, and more rugs arrive to take their place.

Afghan Museum, Hamburg
Posted by Tea and Carpets at 02:28

its unique information for me.Your blog is so nice