SAN FRANCISCO, August 1, 2009 -- When rug collectors in most cities want to buy a carpet, their choices are somewhat limited.

The local options are usually just those dealers with established shops in the area. And, among these, only a few may have collectible pieces.

So, one can only be interested in efforts to break that mold.

One such effort will take place in San Francisco this October.

It is the Antique Rug And Textile Show (ARTS): an 11-day fly in to the Bay City by 40 antique rug and textile dealers from Europe, Asia, and America.

The ARTS show is a co-operative effort between Jozan Magazine – one of the best-known Europe-based rug sites – and the 40 independent rug dealers themselves.

The organizers of the show appear to have taken their inspiration for the event from the ancient practices of the Silk Roads. In those days, merchants banded together to travel trade routes in giant camel caravans, staying overnight in caravansarais. 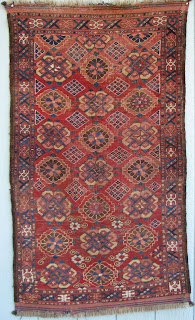 “In the grander establishments, those on major trade routes,” says show organizer Michael Craycraft, “one could find a veritable souk where there was a lively trade in luxury goods from the far corners of the earth.”

In this case, he says, the souk will be a highly specialized one, offering antique and archeological textiles, costume, and oriental rugs.

Organizers say some 2,000 items will be on sale from the dealers, many of whom are well-known internationally. For a full list of the participants see: Exhibitors

just linked this article on my facebook account. it’s a very interesting article for all.
caravan for sales

I enjoyed reading your blog ~ thanks for posting such useful content.

According to the law, a wedding dress offen have two steps. The new couple must sign in the registration office to register a

marriage. This is usually held in the workday, participants also include the wittness of marriage , family members and close friends. Then the bride and
bridal online shop will choose another place to host weddings, which offen on saturdays. A special ceremony held outside is also

popular. Some couples chose only parties to celebrate.
“The currently trend of wedding ceremony is that the new couples want to have fewer guests while they can spend a pleasant moments, tastes a high-qulity banquet and also have a

rule on the wearing ”.said by Blair , a wholesale wedding dresses planner in switzerland.
As one of the first wedding planer of the country, Blair have organized and planned the weddings for 12 working years. As far as Blair have concerned, a sucessful wedding has

its secret. “ the most important thing is that the new Lace wedding

dressescan have their dream came true. They can give a schedule to make clear the activities for the guests.


Wonderful site and I wanted to post a note to let you know, ""Good job""! I’m glad I found this blog. Brilliant and wonderful job ! Your blog site has presented me most of the strategies which I like. Thanks for sharing this.

Carpet Cow has been one of the largest Carpet and Rug Dealers in the Tri-State area. Find wide selection of Rug. We are dedicated to providing first quality merchandise and service to our customers. In fact, most of our customers come to us by word of mouth.