PRAGUE, April 4, 2008 – A Turkmen friend once was visiting his uncle, who owns a rug shop in Peshawar.

As they drank up their strong black tea, the uncle threw what was left in his glass onto the new carpet at his feet.

The visitor was shocked. “What, you don’t like that carpet?” he asked.

“I do,” the uncle replied. “It’s my favorite. But foreigners want carpets that look old and used.”

What the uncle was doing – in a modest way – was ‘antiquing’ his merchandise. The practice has a long and venerable history, from ‘tea-washing’ carpets with herbal extracts, to dousing them in chemicals, to hand-painting shadings into the pile. 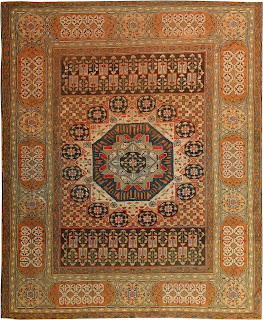 The most famous of old rug forgers, the Romanian weaver Theodor Tuduc (1888 - 1983), reportedly used river stones to abrade his Transylvanian look-alikes. The rubbing helped make his copies look so genuinely used that some were even collected by museums.

Here is a carpet by Tuduc that is inspired by a Mamluke design. Tuduc carpets are so well woven that today they are collectibles in their own right. The carpet is available from the Nazmiyal Collection in New York.

Early European adventure-travelers to the East reported still other antiquing techniques. Eustache de Lory wrote about two in his 1910 article ‘The Persian Bazaars:’

“The wily Persian has discovered the secret of making new carpets look ancient. He smokes them over a fire made with special herbs, and this gives the carpet a used appearance and fades the colors. It is nearly impossible, when this is well done, to distinguish between a genuine antique and a forgery. A commoner way of aging a carpet (very common in the bazaars) is to spread it out on the street, in order that every passer-by and animal may trample on it.” 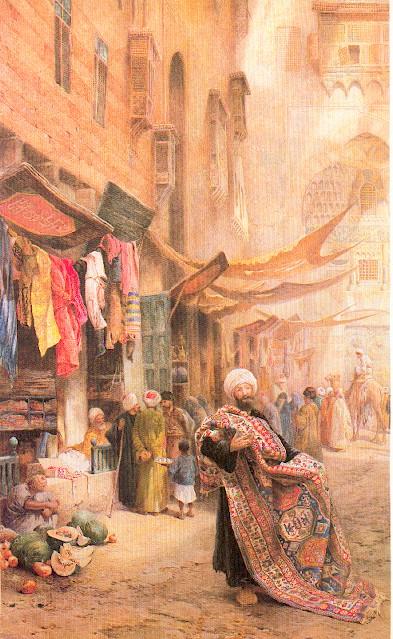 Of course, de Lory was an Orientalist, a genre of artists that professionally exoticized the East. No-one knows if his notes are any more reliable than paintings by Charles Robertson in the 1880s of Cairo’s alleys filled with Caucasian carpets.

Still, the question remains. Why is the artificial aging of carpets – with or without the buyer’s knowledge – such a persistent part of the rug business?

One reason might be that many Western consumers find Eastern colors too bold. Aging rugs with chemical washes can mute the hues to better fit those buyers' tastes.

But another answer might be found in the way different societies regard time and the value of handcrafted goods.

In the hyper-modern societies of the west, old people often complain they do not get the respect their years deserve. But old things, such as heirlooms, are venerated.

That veneration seems to be doubled when the heirlooms represent traditional handicrafts that were commonplace in Europe until they faced extinction in the machine age. Today, surviving pieces are seen as something genuine, artisanal, and rare and the older they look the more authentic they seem.

Many of these arts and crafts exist today mostly in museum collections. The museums themselves began to appear from the 1750s onwards, becoming more and more numerous and nostalgic as the industrial era proceeded.

By contrast, more traditional societies seem to have a very different view of their traditional objects. Here, time erodes a thing’s value instead of enhancing it. After all, similar objects are still being made by every new generation in more or less the same way. When something wears out, its value passes on to its replacement.

So, perhaps it is no surprise that strange things can happen when modern and traditional worlds meet – things that not only interest businessmen but also some anthropologists. One is Brian Spooner:

Spooner made that observation in his article "Weavers and Dealers: the authenticity of an oriental carpet." It appeared in the 1988 book ‘The Social Life of Things.’

In a footnote, Spooner cites as an example the museum of the University of Pennsylvania once receiving a gift of a genuine Turkmen carpet woven in the design of an American flag. Compared to that, splashing tea over a traditional Turkmen design seems almost like a blessing.

Brian Spooner in ‘Weavers and Dealers: the authenticity of an oriental carpet”

The Social Life of Things: Commodities in Cultural Perspective

The antique dealers in my Istanbul neighborhood age their carpets by putting them in the street for cars to drive over.

The best on the net! Best. Product. Ever! I will reccomend you to my collegues.

I absolutely love your blog and find the majority of your post's to be exactly what I'm looking for. Does one offer guest writers to write content for yourself? I wouldn't mind publishing a post or elaborating on a number of the subjects you write with regards to here. Again, awesome web site!

It's not my very first time to visit this blog; I’m visiting this daily and acquire superb info from here day by day.Lags

This is really quite informative blog such qualitative info I have never seen anywhere. Lashar Rugs

I would be supportive on all your articles and blogs as a result of they are simply up to the mark. carpet cleaner Urbandale

Visit for More: The Smart Digital


Thank you for sharing an interesting and very useful article. And let me share an article about health here I believe this is useful. Thank you :)

the article is very petrifying, hopefully it can be useful and an important lesson.

Thank you for sharing the information. See also information from us through the following article! Thank you :)