Turkish Prayer Rugs And The Gates Of Eternity 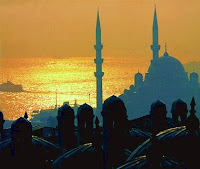 ISTANBUL, July 4, 2008 -- Is eternity something artists should illustrate as a physical thing? Or should artists represent it as something abstract and supernatural?

It is a question that every religion approaches differently and on which philosophers disagree.

But it is interesting that Turkish prayer carpets offer both possibilities: realistic and abstract. And perhaps that is one reason for their great appeal.

Turkish prayer carpets became widely familiar in Europe and America during the late 19th century, when Western tourists began traveling to Istanbul in large numbers by the Orient Express and by ship. The travelers helped popularize the rugs as symbols of the exotic and spiritual East at a time when Orientalism was at its height.

As a result, production boomed in towns like Ghiordes, Ladik, and Melas (Milas), and their typical designs became household names in the Western market.

The Anatolian town and village weavers, who adapted and simplified the designs of earlier Ottomon court prayer rugs, were not trying to show what heaven looks like. The purpose of all prayer rugs is only to mark out a space for prayer that is secluded from the mundane.

This is in line with the injunction in the Koran to "pray in a clean place". The first mosque is traditionally said to have been a space drawn in the sand by the Prophet Mohammed, who said "take off your shoes when you enter here. This is holy ground."

But because the weavers had to fill the space set aside for prayer, they had to address an art problem that is shared by all cultures. That is, how to best symbolize the eternal. 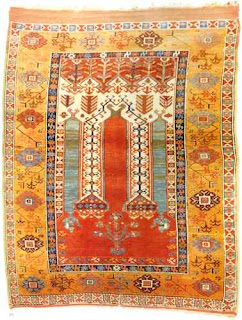 The designers of Ghiordes and Konya opted for solid architecture. They depicted the central feature of all prayer rugs – the arch – as resting upon columns. The arch itself symbolizes the focal point in a real mosque, which is the mihrab, or ornamental niche, that marks the wall facing Mecca.

This carpet above is a 19th century piece from Konya in central Anatolia.

But weaving natural-looking “gates to eternity ” -- as some Western experts like to describe prayer rugs -- is just one possibility.

By contrast, the rugs of several of the other great traditional prayer rug centers of Turkey – Kula, Ladik, Melas, and Mudjur -- took an abstract approach. 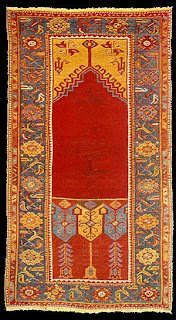 In these rugs, the mihrab is still the defining feature. But the field of the rug is fluid and appears to change with each glance. Instead of a sense of certainty, it offers the mystery of a curtain which one day may be drawn aside.

The rug shown here is from Ladik, a town in central Anatolia not far from Konya.

Both the realistic and the abstract designs were widely collected in the West. But partly due to export pressure to adapt to Western tastes, the quality of the patterns began to decline with time. They became more and more decorative and less and less certain of their identity.

Some experts say the export pressure was so great it caused workshops to reverse the way the rugs were woven. Instead of starting at the bottom and weaving toward the mihrab, some weavers started at the top. That way, the pile would catch the light best when hung on a wall.

Other experts disagree. They say that individual weavers may have started at the top when they were uncertain of their stocks of dyed wool. Since the mihrab is considered the most important element in any prayer rug, they may have wanted to be sure of completing it first before running out of preferred colors.

Whatever the case, it is certain that by the middle of the 20th century, Turkish prayer rugs had lost favor – both in the West and at home.

In the West, fashions changed and collectors began looking for bolder village and tribal weavings free of – among other things – Western influence. Today, in real terms, the cost of a Ghiordes or Ladik in the West is said to be less than it was at the height of the rugs’ popularity at the turn-of-the-last century.

In Turkey, the end of the Ottomon Empire and the rise of the secular republic equally reduced the prayer rugs’ value as weavings. 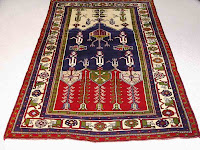 Townspeople who once commissioned expensive pieces for the Haj or for their homes, and later bequeathed them to the local mosque, gave up those customs as the population shifted to major cities. Prayer rugs became plainer and simpler, as shown by this recently made Ladik.

But all that may just make the great 19th century prayer rugs of Turkey more interesting for those who still want to collect them. Not only do they offer a creative vision of the spiritual world, they also offer a reminder of how much our own aesthetic world keeps eternally changing.

Wikipedia: Mihrab
Posted by Tea and Carpets at 08:05