Portrait Carpets: From Local Heroes To World Leaders, Every Picture Tells A Story 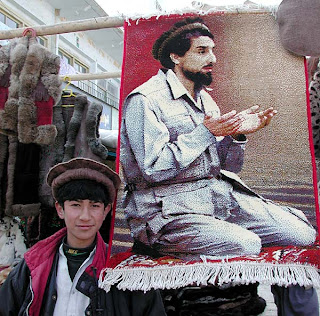 KABUL, January 9, 2009 -- The Afghan capital may be a good place to look for the sober-colored carpets of Central Asia. But the weavings most obviously on sale are portrait rugs, and they are as brightly tinted as movie posters.

Almost all the portrait rugs depict Ahmed Shah Massoud and they are everywhere – hanging from clotheslines in street bazaars and piled inside the cramped rug shops on Chicken Street.

The fact that the pictures are of Massoud, the famous Afghan-Tajik commander, isn’t surprising. Like every genre, portrait rugs – which deliberately mix art and politics -- have their rules. And Massoud embodies all of them.

The first requirement is to have a story larger than life. Massoud has that. As a mujahideen leader, he fought against the Soviets and later, when Afghanistan plunged into civil war, against many other foes, including the Taliban. Throughout, he kept the Afghan-Tajik heartland in the Panjshir Valley safe from enemies. His nickname was the ‘Lion of Panjshir.’ 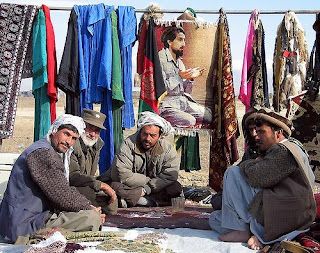 Massoud also meets a second requirement specific to posthumous portrait rugs. That is to have died an untimely death. He was assassinated by a team of suicide bombers posing as journalists just before 9/11. After 9/11, U.S. airpower enabled Massoud’s and other anti-Taliban forces to finally sweep to victory.

So, where in other countries fallen leaders live on in movies to become the stuff of legend, in Kabul Massoud lives on in weavings.

The Massoud rugs are clearly more about politics than about art. They are loosely made and priced low for the widest distribution. But the same is not true for all portrait carpets, which can be found in varying forms from the Caucasus, to Iran, to China. 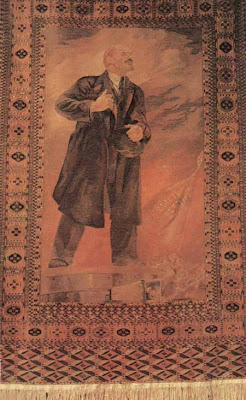 Take this portrait carpet of Lenin, one of the most popular figures for Soviet propaganda carpets. The Turkmen weaving is of museum standard and one can only guess whether it was commissioned for a meeting hall, mausoleum, or the private villa of a powerful party boss.

Another popular face on Soviet portrait carpets is Yuri Gagarin, the first man to orbit the Earth. His rugs were highly popular in Soviet homes at the height of the space craze in the 1960s and 70s.

In Iran, portrait carpets have a long association with the pre-revolutionary dynasties. Common faces during the Shah's era were the Shah himself and, oddly enough, John F. Kennedy.

For that matter, in Iran politicians don't just appear on carpets, carpets also appear in politicians' speeches. Ayatollah Khomeini, the former Supreme Leader, is a case in point.

"None among you is content with his own carpet,” he once complained publicly to other politicians. “Each one among you seeks to stretch his legs on his neighbor's carpet."

Perhaps one of the most unexpected people to ever appear on an Iranian portrait carpet is a young American who taught at the American missionary school in Tabriz early in the 1900s. 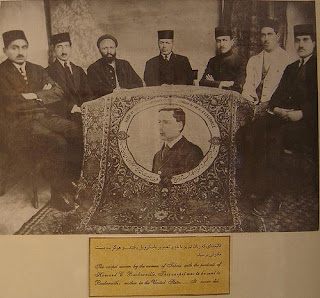 The teacher, Howard Baskerville, was a fervent believer in democracy who sympathized with Iran's Constitutional Revolution against the despotic Qajar monarchy. When royalist troops besieged Tabriz in 1909, he joined his students in the fighting. He died at age 24.

"The only difference between me and these people is my place of birth, and this is not a big difference," is how he explained why he was risking his life in Iran’s struggle.

After his death, carpet weavers in Tabriz wove his portrait as a gift to his mother in America. He was buried in the city's Armenian cemetery and today there is still a bronze bust commemorating him in the Tabriz Constitutional House.

How difficult is it to weave a top quality portrait carpet?

Those who do it say it is the most difficult form of carpet making of all.

Kamil Aliyev, the living master of portrait weaving in Azerbaijan, has produced the likenesses of state visitors ranging from Indira Gandhi, to Bill Clinton, to Vladimir Putin. 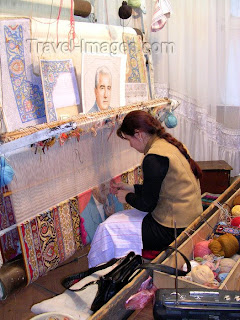 He told Baku's Azerbaijan International in an interview in 2002 that to get a face right an artist must keep track of dozens of colors on a knot by-knot basis -- as this picture of a weaver at work shows.

He added: "being able to look at thousands and thousands of threads takes an enormous amount of concentration and patience."

Aliyev, who apprenticed under Azerbaijan's carpet expert Latif Karimov, says portrait weaving also takes a tremendous toll on the artists' eyes. And that may be one reason it is losing popularity among younger artists.

"I've enjoyed my life's work but I'm afraid that after me, the tradition of making these portrait carpets will die," he told the magazine. "It seems there is no one in Azerbaijan right now who can carry on my legacy. Today's youth who graduate from the carpet institute aren't trained to draw portraits."

Azerbaijan International: The Portrait Carpets of Kamil Aliyev
Posted by Tea and Carpets at 11:36

I love these carpets with portraits so much! Is the most original stuff I've ever seen!

Pictorial carpets are a testament to the true art of Oriental Rug weaving! Thank you for sharing

Wow - what a tremendous resource you have here, great articles and fantastic depth / exploration. Thanks so much for sharing!


The article is good. Also visit my article, read and share too. God willing useful. :)

Can I watch AFL live on my computer? said...