Mughal Carpets And The Natural Beauty Of Flowers 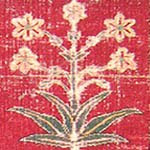 NEW DELHI, May 15, 2011 – When Europeans discovered a direct sea route to India in 1497-8, they arrived just in time to witness the birth of one of the East's great empires.

It was the Mughal Empire and it was the last of the waves of epic conquests by Turkic-Mongol warriors which for centuries shaped the history of so much of Eurasia.

The empire the Mughals (or Moguls) created, beginning in 1526, so impressed Europeans with its wealth and power that the word 'mogul' has become a synonym in English for "tycoon," as in a Media Mogul or Banking Mogul.

But the Mughal Empire also gave India one of its most enduring and internationally recognized artistic styles. That style is the decorating of objects of all kinds with patterns of naturally depicted flowers.

This carpet, and the detail of it shown at the top of the page, show just how beautifully Mughal weavers portrayed flowers. The carpet is available to collectors from the Nazmiyal Collection in New York. 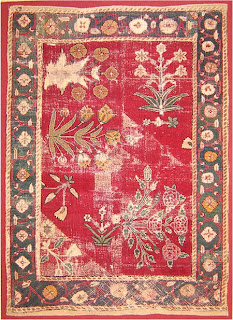 Where did this style originate and how did it become the epitome of Mughal art?

The origins can be traced to those of the Mughal Dynasty itself, which began with Babur, a blood descendant of both Timur and Chengis Khan.

Born in 1483 in the Fergana Valley of present day Uzbekistan, he grew up in the fusion of Turkic-Mongol and Persian culture which then characterized court life across a vast band of Eurasia -- from Anatolia to Persia to Central Asia.

This shared court culture put a premium on luxurious gardens and Babur personally built some of the most famous gardens of his time. The garden, which he built in Kabul, his first major conquest, still stands as one of the city's landmark parks and is the site of his tomb.

But it was Babur's subsequent conquests of the Muslim sultanates of northern India that brought still more elements into the mix and created a uniquely Mughal artistic style.

India's Muslim sultanates dated back to Islamic conquests centuries earlier. But their populations remained largely Hindu, and it was the fusion of Turkic-Mongol and Persian culture with Hindu aesthetics that would distinguish the Mughal style – and Mughal carpets – from the art of the other great eastern empires. 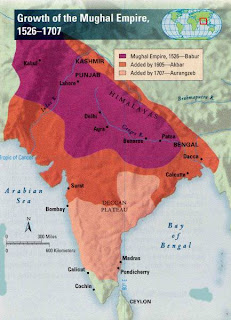 Here is a map showing the greatest extent of the Mughal Empire, which lasted from 1526 to 1858.

The distinctly Mughal style did not emerge immediately. For decades, Mughal carpets were essentially "Persian style" carpets which took their design inspiration from Persian floral carpets while adding some Indian motifs, such as segmented blossoms, wisteria, or grape clusters.

This Persian Style echoed the initially large presence of Safavid artists at the Mughal court.

The Safavid artists' presence was due to a quirk of history. Babur's son, Humayun, lost his father's empire to usurpers and was sheltered for years by the Safavid Shah Tahmasp, who was a huge patron of the arts. After Humayun regained his throne and Shah Tahmasp turned austere in middle age, many of the Shah's finest artists moved to Humayun's court instead and became its leading lights.

During the reign of the next Mughal emperor, Akbar, blossoms and vines, even whole plants, became commonly represented in Indian art. And Akbar's successor, Jahangir, made a special trip to Kashmir in Spring just to admire the valleys in bloom.

After returning from his trip, Jahangir famously recited an ode celebrating the natural beauty he had seen and ordered one of his most accomplished miniaturists, Mansur, to paint more than a hundred portraits of flowers. 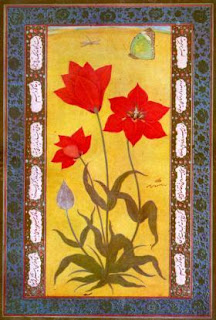 One of Mansur's paintings is shown here.

By the time of the following emperor, Shah Jahan (1628-1658), who is most famous for the Taj Mahal, the rapidly developing Flower Style was already spreading across Mughal art.

Patterns of naturally depicted flowers could be found on objects ranging from inlaid stonework, to the borders of miniature paintings, to ceramics and carpets.

In the book, published in conjunction with an exhibit of Mughal Carpets at The Metropolitan Museum of Art in New York in 1997, he writes:

"It is true that in the earlier years of court carpet production, from about 1580 to 1630 or so, the patterns of Indian carpets were heavily dependent upon Persian models (nevertheless displaying an unmistakably Indian aesthetic).

"But then a particular fashion for formally but naturalistically depicted flowers came into vogue. This truly indigenous style came to dominate Indian ornamentation in all media and even influence foreign artistic production, particularly in Iran, perhaps as a result of carpet or textile imports."

But developing a unique Flower Style was not the Mughals' only contribution to carpets.

The Mughal weavers also made extraordinary use of color to achieve naturalistic effects, including "mixing" of two colors to achieve a third one. They did so by juxtaposing knots of different colors, usually in checkerboard fashion, to trick the eye.

At the same time, the weavers used color shading to highlight the edges of plants and other objects and give them a three-dimensional appearance. 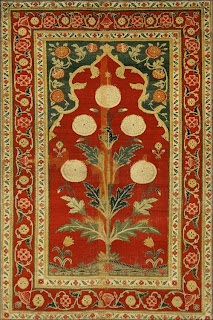 Both these techniques, Walker notes, were rarely found in carpets outside of India.

The weavers did not always strive for realism in their portraits of flowers. They also sometimes combined the blossoms of different plants on a single stem to create imaginary plants of great beauty, too.

Here is a Mughal carpet with a motif of just one flower set in an apparent niche.

Such Mughal niche rugs are frequently called prayer rugs but many art experts believe they were more likely used as qanats, or screens, to surround the tents of an emperor's encampment when he was traveling.

One more unique characteristic of Mughal carpets was that weavers did not use silk for the high-knot count they needed to draw their flowers.

Most often, they used pashmina, the extremely fine wool undercoat of the Himalayan mountain goat. As Walker notes, that made India "the only carpet weaving society where silk was not the luxury material of preference." 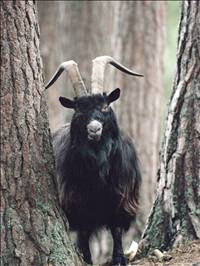 The source of the pashmina was western Tibet but, because it was imported through Kashmir, Europeans long referred to it as "cashmere," mistakenly assuming Kashmir was its source.

Europeans began to become familiar with Mughal carpets by the early 1600s, very shortly after English and Dutch ships followed the Portuguese trail to India in the last decade of the sixteenth century.

Records show that Britain's East India Company sent a first shipment of carpets back to England in 1615. The Dutch started to ship carpets from India in about 1625.

But the Mughal carpets which first appeared in Europe were not the Flower Style carpets so sought-after today. They were the Persian Style ones which at that time still dominated Mughal weaving.

Ironically, the European taste for Mughal Persian Style carpets continued long after the Flower Style became dominant in the empire itself. That was because the European market for centuries had thought of 'oriental carpets' only in terms of what was most familiar to it -- Anatolian and Persian styles -- and imported accordingly.

European paintings of the time – particularly Dutch and British paintings – continued to frequently portray wealthy families with a prized oriental carpet displayed on a table near them.

But precisely because Europeans tended to import Mughal carpets that were Persian Style, it is often hard for art experts today to know if the carpets depicted were made in Safavid Iran or in Mughal India.

Had the families acquired a Flower Style carpet, instead, knowing its provenance would be easy.

This is an excellent review.I would love to read more about this topic.

I am agree With Nancy. Those carpets are very famous and that comes from Middle Asian Countries. There are many Other carpets, Check out those -> Woollen Carpets, Nylon Carpets, Burber Carpets

Thank you for sharing an interesting and very useful article. And let me share an article about health here I believe this is useful. Thank you :)