Can Modern Weavers Revive The Classical Carpets Of The Ottomans? 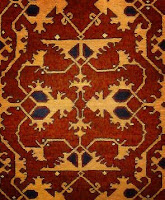 SAN FRANCISCO, November 7, 2008 -- There is one question that probably has occurred to everyone who ever paged through a picture-book of antique carpets

That is: “Why aren’t these beautiful designs produced anymore?”

But only a few people ever take the next step of actually trying to get antique carpets woven again.

One person who has tried is Christopher Robin Andrews, an architect in the San Francisco Bay area. He fell in love with carpets while a student and now, half a lifetime later, devotes his spare time to reviving classical Ottoman designs.

The designs that inspired him to start were Lottos and Holbeins -- patterns one mostly sees only in early Renaissance paintings or in a few museums. So, he has not set himself a simple task.

(Shown here is 'The Alms-Giving of St. Anthony of Padua, by the Venetian painter Lorenzo Lotto in 1542. The carpet design is named "Lotto" after the artist.) 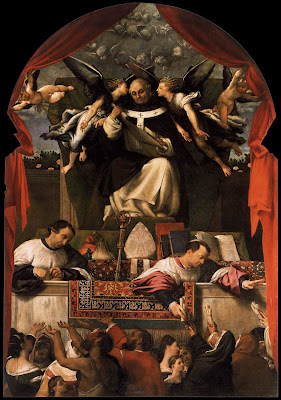 Still, he says, there was no other solution. A trip through Istanbul's carpet bazaars in 2001 confirmed that the easier option of simply buying an off-the-shelf Lotto did not exist.

Andrews' passion for classical Ottomans comes from the fact he studied architecture under Christopher Alexander, a teacher who is also a carpet scholar.

Alexander, a professor emeritus at the University of California, Berkeley, believes buildings and living spaces succeed and satisfy people only when they embody the same harmonious order we see in living things.

And he believes architects can learn a great deal about giving a life-like appeal to inanimate objects by studying, among other inspirations, the designs of the old carpet masters. He has amassed an impressive collection of Ottomans and often requires his students to draw them in detail in order to better understand the designs.

What are some of the lessons the classical masters teach? They include harmony, differentiation through color and geometry, the coupling of opposites to create nodes of interest, the balancing of directional forces, the proper use of randomness, and much more. (For a fascinating summary, see: "The 'Life' of a Carpet: An Application of the Alexander Rules," by Nikos A. Salingaros) 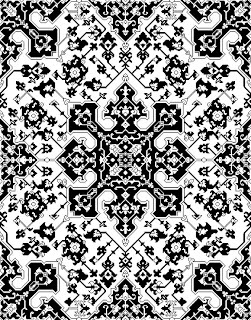 Andrews has made hundreds of detailed knot-by-knot drawings of carpets -- enough to become very knowledgeable about their structure. Enough, too, that when he lost patience with the Istanbul bazaar, he dared to commission weavers himself to turn his drawings (like this one of the center field of a star ushak) into the rugs he wanted.

Initially, he tried producers of "bespoke" rugs on the internet but the results were disappointing. And steadily what began as an Everyman's dream of finding a shortcut to the past became, instead, a hugely complex journey into the rug-making world.

Finally, however, he located a partner in Ibrahim Tekin, a Turkish connoisseur and carpet producer who liked the challenge. But even with dedicated weavers on the project, and an experienced dye master, the results fell short.

The biggest problem turned out to be mind-set. Neither the weavers nor the dyer had ever seen a classical carpet. So, they reflexively adapted the project to what they assumed was the goal: a variation on the design, weave, and colors of a contemporary, commercial rug.

Then Andrews and Tekin discovered the answer.

"We agreed we had to take the dyer and the workshop manager we were working with near Konya to Istanbul to visit the museums," Andrews says. "And we told them these are the carpets we want to revive and once they saw them they said, ah that's what you want! Because their inclination was to make a commercial product and their perception of the commercial market was much different from those classical carpets."

The most striking differences were in the colors. While modern decorative carpets tend towards pastels, classical carpts have deep, fully saturated hues. And while modern carpets often have exaggerated abrash, the colors of classical carpets are always consistent across a rug.

Ultimately, Andrews obtained the results he wanted. He launched his line -- Classical Carpets -- in Spring 2007 and in Spring 2008 opened at the "Double-Knot Gallery" of his New York partner, Murat Küpçü. He has also found a partner in Italy, fellow architect and rug dealer Andrea Pacciani in Parma.

On the left is a Small-pattern Holbein produced by Classical Carpets.

But the story does not end there. Even labors of love must be funded and that means finding consumers who share your dreams.

Andrews says there is a small niche market for classical revivals, and its membership is surprisingly varied.

"I am selling to collectors who can't afford the originals, we are talking about carpets you really see in museums, and even people who can afford the originals are not going to put them on their floors," he says. "So I am selling to collectors who really love these designs and want to have a carpet they can actually put on their floor. And then I am also selling to some people who don't know anything about these carpets but who simply see them for the first time and get excited about them."

He adds that one group which has proven resistant to the revived classical carpets is -- oddly enough -- interior designers:

"In a way the carpet designs are perhaps too powerful. Modern architectural interior design really puts carpets in the background and when you look at the historical context of these classical carpets, they were popular in the 15th and 16th century when people did not have a lot of furniture, so something like a carpet had to make a big statement in a room. And now decorating really doesn't work that way. Most people don't want a carpet that is going to take over a room."

Still, serving just a niche market agrees with Andrews. For him to remain directly involved in all steps of the business, and keep his day job, the operation has to remain on the scale of a couple of carpets a month.

So far, Classical Carpets has reproduced designs ranging from Lottos to Holbeins to Ushaks, including a Chintamani. Many of the carpets are commissioned.

What are the current best-sellers? 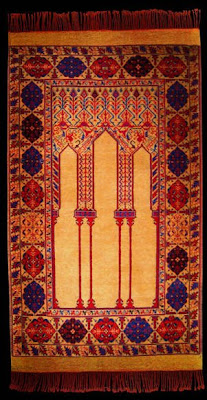 In May, Andrews made a trip to Transylvania with Alberto Boralevi and Stefano Ionescu, both experts on the Ottoman collections kept in the area's Gothic churches.

After a lot of study in situ, he has reproduced 4' x 6' (1.22 meter x 1.83 meter) pieces like this one that catch the eye of Transylvanian enthusiasts.

(Note: The picture at the top of this article is a detail of the center of Classical Carpets' Lotto rug.)

"The 'Life' of a Carpet: An Application of the Alexander Rules," by Nikos A. Salingaros

Barry O'Connell: Notes On Transylvanian Rugs
Posted by Tea and Carpets at 04:22

Thanks for the interesting card sharing from you. This is my website, if you like watching movies, go in there. thank you 123Movies

I found this article useful. I will definitely recommend it to my friends. and if abjn wants to watch free movies then go to my page to help me. FMovies

wow. It's great to know that. You really are interesting people. i very like you. Go to my page to watch a good movie for free SolarMovies

Thank you for sharing. I have been searching for it for a long time. It is fortunate to see it from your article. If you want to watch movies, go to my site YesMovies

Thanks for Fantasctic blog and its to much informatic which i never think ..Keep writing and grwoing your self
and it's very helping us this post is unique and interesting
Canada visa application
하이게이밍
릴게임사이트
온라인슬롯머신