Isfahan And The Safavids' Design Of The World 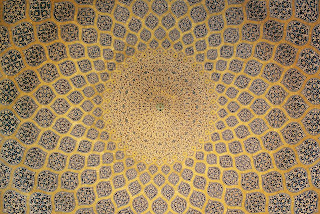 ISFAHAN, August 21, 2010 -- If there is a single phrase that best evokes Safavid art, it might be "orderly excess."

Curiously, that is the same phrase that could be used to describe European art at the height of the Safavid Empire in the 17th century: Baroque.

But if Persia, too, had a Baroque period and Safavid carpets and other art forms show it, how did it develop and what was its goal?

The greatest builder of the Safavid era – Shah Abbas I – left the answers in a single place for both his contemporaries and for us to see.

The place is Isfahan, one of the world's most famous planned cities. 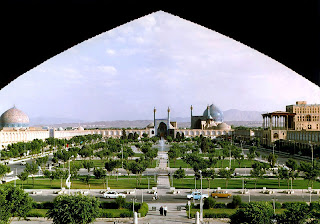 In Isfahan, his capital, Shah Abbas sought to create a vision that would symbolize his empire.

That was in line with the tradition of dynasties everywhere, but Abbas went further than most.

He wanted to unify his empire by giving its diverse peoples a strong national and religious identity, so he transformed the heart of his capital city into an idealized place they would affiliate with.

And he gave it an unforgettable, almost unworldly, beauty by combining the two artistic elements that do the same for Safavid carpets.

They are: designs with an almost mathematical sense of order combined with effusive use of colors and patterns as decoration.

The effect is to make heavy structures light, whether they are carpets or massive buildings. 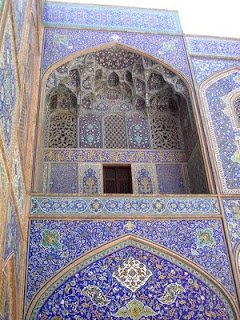 Here is a picture of one of the walls of the Mosque of Sheikh Lotfollah, the first mosque built by Shah Abbas when he permanently moved his capital to Isfahan in 1598.

Kim Sexton of the Dept. of Architecture at the University of Arkansas sums up the trick neatly in an article entitled Isfahan – Half the World:

"It prevents the viewer from contemplating the workings of the physical laws which keep the building standing up. Thus, a huge building can be made to seem rather weightless, like an otherworldly miracle hovering on earth."

The trick -- equally known to Baroque artists in Europe -- was not unique in Persia to the Safavids. But it is fair to say that they used it to lift structures to previously unknown heights. 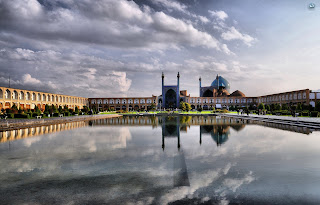 In Isfahan, Shah Abbas heightened the effect still further by organizing some of his greatest buildings around a single city square – a square that with only a little imagination can itself be thought of as a grand Safavid carpet.

The original name of the square is Naqsh-i Jahan, or Design of the World. Measuring 165 meters by 500 meters, it is one of the largest city squares ever built.

That alone represented extraordinary city planning at a time when Abbas' contemporaries were Elizabeth of England and Suleiman the Magnificent and cities usually grew haphazardly by themselves beyond the royal palace.

But the square was extraordinary in other ways, too.

For one, it was truly a shared public space, used for everything from exclusive royal polo matches to popular carnivals. The shah's palace looked out over the square, with a broad verandah for viewing the events below. 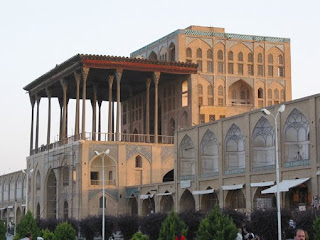 The Imperial Palace occupied the entire west side of the enclosed and arcaded square. But it also shared the space with the two other great institutions of Safavid society, the mosque and the bazaar.

Just as weavers might do, the city planners placed all these institutions like motifs around the square's border.

Directly across from the palace is the mosque of Sheikh Lotfollah, the first new mosque to be built in the new capital. It was completed in 1618 as a private mosque for the members of the Shah's harem and so has no minarets.

The stunning ceiling of the mosque shows how much decorated tiles could lift a building's interior, as well as exterior, to seemingly boundless heights. 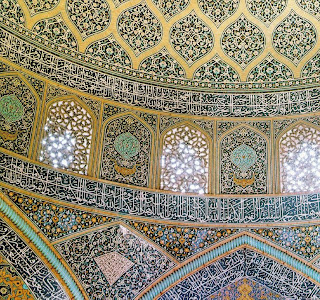 Here is a photo of the dome interior. The picture at the top of this article shows the details of the ceiling pattern.

The design of the ceiling, with its central sunburst medallion, is highly reminiscent of some contemporaneous carpet designs, showing the high degree of unity in Safavid art style across different media.

On the north and south ends of the square are two other great mosques and, on the north end, too, is the entrance to the Grand Bazaar.

Both the mosques are worth mentioning in their own right.

The mosque at the north end, the Imperial Mosque (now Imam Mosque), is an entirely Safavid construction completed in 1629.

The dome in the main prayer hall is 36 meters high, creating an echo chamber where scientists have measured up to 49 repetitions, only 12 of which are audible to the human ear. 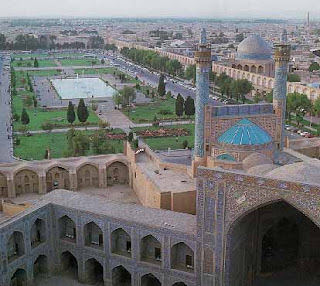 Here is a view of the square from the Imam Mosque. The mosque itself is turned at an angle to the square so as to face Mecca.

At the south end is the Great Friday Mosque, which is much older. It was built when Isfahan was the capital of the Seljuk Empire (1038-1194) that stretched from Central Asia to Syria. It was partly redecorated in Safavid style to harmonize with the other buildings.

The Friday mosque is the largest mosque in Iran and has a central fountain that resembles the Kaaba in Mecca, so prospective pilgrims can practice their rituals before the Haj.

It is interesting to see how the square's designers found a way to visually integrate buildings as varied as mosques, bazaars, and palaces into a single great square.

They did so by highlighting something common to all of them: the iwan.

An iwan is a vaulted arch that has been used in Persian architecture since time immemorial. It was originally used for public buildings, including palaces, but under the Seljuks became part of mosques as well. 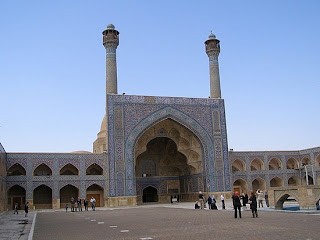 Here is a picture of an iwan, with the addition of two minarets, in the courtyard of Isfahan's Great Friday mosque.

It was the Seljuks who first placed iwans at the center of all four sides of a mosque's inner courtyard, creating a unique design that today architects call the 'four-iwan mosque'.

To tie together the varied buildings in their 'Design of the World,' the Safavids erected giant iwans as gateways in each of the square's four sides.

As Sexton notes, that made the entire square look like the courtyard of a four-iwan mosque, giving everything inside it -- including the centers of political and commercial power -- a sanctified feel.

That sense of a divinely ordained order increased the Shah's power and his subjects' loyalty the same way arguments that kings ruled by "divine right" increased monarchs' power in Europe.

The beauty of Isfahan staggered people of the time, including European ambassadors and traders who lived in the city. 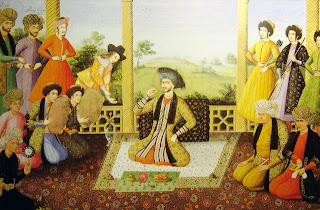 Here is a portrait of one of Shah Abbas' successors, Shah Suleiman I, depicted with courtiers and visitors in Isfahan in 1670

Thomas Herbert, who was part of Britain's first embassy in Isfahan in 1627 famously remarked "I have thought of writing a book about it, but nobody at home in Yorkshire would ever believe..."

He went on to write a book anyway, 'Travels in Persia,' which was published in 1634 to great success.

The famous half-rhyme Esfahan nesf-é jahan (Isfahan is half the world) was coined by a visiting French poet, Renier.

(In the panorama of the square at the top of this article, the mosque of Sheikh Lotfollah is on the left, Ali Qapu palace is on the right, and the Imperial – now Imam - mosque is at the back.)

Isfahan – Half the World, by Prof. Kim S. Sexton, Univ. Of Arkansas
Posted by Tea and Carpets at 00:18

Loved the post,really informative.Thank you :)