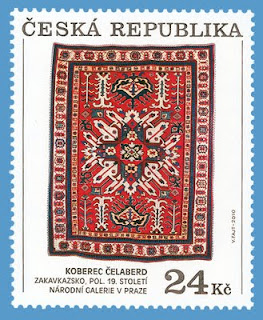 But this year the Czech Republic has issued two.

The pair of stamps depicts 19th century Karabakhs, from the Caucasus area of the same name.

One stamp (above) shows a Chelaberd.

"Chelaberd is the best known carpet pattern woven in Karabakh. It is also known by an older designation, Eagle Kazak, which comes from interpreting its main motif – a large, medieval-looking medallion radiating beams – as a two-headed eagle. The oldest carpets of this type have an almost square format, a single dominant medallion, and an unusually expressive bright coloring. It is to this small group of carpets that the piece depicted on the stamp belongs." 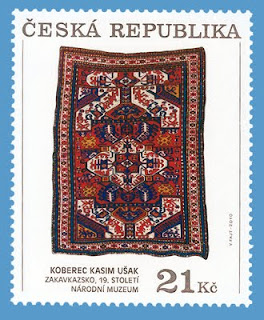 Here is the accompanying description:

"Kasim Usak carpets are considered by professionals and amateurs alike to be Karabakh carpets from the Trans-Caucasus. Nagorno-Karabakh is a mountainous land located in western Azerbaijan not far from the Armenian border. Individual types of Karabakh carpets are named according to their village of origin. As with other Karabakh carpets, Kasim Usaks are notable for bright coloring, typically flowered borders, and large geometric forms in the center field. The Kasim Usak shown on this stamp is from the 19th century."

The stamps, which were issued in April, are a reminder of the rich collections of Caucasian carpets held by the Czech National Gallery and the National Museum and the importance both curators and the public put upon them.

Most of the Caucasians in the collections are village and city weavings from 1850 to 1910 and they were the object of a major exhibit in Prague in 2007.

The exhibit, which also included carpets in private collections, was accompanied by a book, 'Caucasian Carpets,' describing the exhibited pieces and the history of Caucasian carpets overall.

Since then, some of the Caucasians have also been presented in other periodic exhibits of carpets from Czech museums' and castles.

What the stamps don't tell is the interesting story of how many of the Caucasians came to the museum collections.

And that, in part, is the story of how oriental carpets once played an important role in art schools in the 19th century throughout Europe, only later to be relegated to Asian Art and ethnographic museums as fashions changed.

The Chelaberd on the stamp above, for example, was purchased in Vienna as early as 1886 by the Museum of Decorative Arts in Prague. It -- along with fabrics and other oriental handicrafts – was part of the study collection the museum maintains for students in applied arts schools.

When the carpet was purchased, Orientalism was at its height across Europe and design students regularly and systematically explored oriental patterns for inspirations. 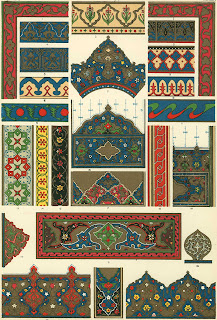 Just how systematically can be judged by the contents of one of the design bibles for English-speaking students at the time: Owen Jones' "The Grammar of Ornament." Published in 1856 and included some 100 full-color plates of designs ranging from Greek, to Roman, to Byzantine, to Moorish, to Egyptian, to Persian, to Indian to Chinese.

The image shown here is of one of the Persian plates.

Students in other parts of Europe had access to similar archives of material carefully collected by their art school faculties.

The school's purchases of rugs were carefully logged and represented considerable investments then just as they would today.

Among the most visible results of the passion for Orientalism in Prague are two major neo-Moorish buildings in the heart of the city. Both are synagogues built in the early 1900s. 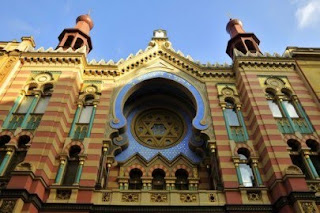 One is the Jubilee Synagogue, built in 1906 and named in honor of the 50th anniversary celebration, or the silver jubilee, of the reign of Emperor Franz Josef I of Austria. At the time, the Czech lands were part of the Austro-Hungarian Empire.

The interior of the Jubilee Synagogue is a whimsical blend of Moorish elements with intricately painted Art Nouveau details. Many Art Nouveau elements here and elsewhere were derived from oriental patterns, which were a major design inspiration for the art movement.

The honored status of oriental rugs in the teaching collections of European applied arts schools began to decline once the lush styles and fashions of the 19th century gave way to the spare modernism of the 20th.

By the 1950s, most lay forgotten in school basements and had been long removed from the schools' curricula.

Some of the pieces in Prague's Museum of Decorative Arts – including the Chelaberd – were transferred to the National Gallery in the 1960s. There they took on a new status as examples of Asian art distinct from European fashions -- much as European homes in general separated with their oriental rugs after their peak popularity during the Victorian era.

Still, the story of Prague's Caucasian carpets does not end there.

The collection at the National Gallery continued to grow throughout the past decades thanks to a succession of curators interested in expanding it by acquiring some of the good privately owned pieces in the country.

Curators say that Prague has a special relationship with Caucasian carpets because historically they were not only popular in the Czech market but readily accessible.

As part of the Austro-Hungarian Empire, Prague had a direct link through Vienna to the rug markets of Istanbul.

Then, after the first World War, many White Russians brought a wave of Caucasian rugs and other valuable belongings to newly independent Czechoslovakia as they fled west.

And finally, even during Czechoslovakia's long period as a Soviet satellite, it was still possible for ardent collectors to visit two rug-producing areas -- the Caucasus and Central Asia – although the Soviet bloc was cut off from the rest of the global collectors' market.

The newly issued Czech postage stamps are a reminder of all these reasons Caucasian carpets hold a special place in the country's life.

One can only wish other national post offices and museums would team up to tell their carpet stories as eloquently.

(For more on rugs in the Czech Republic, see: A Rare Oushak Carpet In A Czech Castle Catches The Rug World’s Eye.)

(For more on orientalism, see: Orientalism and Oriental Carpets.)

Interesting article. The history of Central Europe is both fascinating and complex. So many strands and threads leading everywhere.

but the king was born in order to curb housing prices rose too sensitive policy period. Originally, replica gucci belt for the four countries as the representative of the new round of control policies, the public doubts, worried about the effectiveness of boardgamesofold its policy by the local government and developers in the invisible,

If you are looking for Dragon store covers in Dubai then you are the ideal place for that .Carpet Tiles in Abu Dhabihave a most expansive game plan of plans to research; you can in like way check through other floor surface things, for example, vinyl mats, Custom sisal cover, custom sisal mats, Dragon shop mats , wooden deck, Office Carpet Tiles Dubai, Vinyl Flooring Abu Dhabi, cover edge limiting tape and parquet flooring.For more information please click our site http://www.carpetsdubai.com/

Thanks for sharing this content.
Upholstery Repair works in Dubai

Thanks for sharing this content with us
Artificial Grass

its unique information for me.Your blog is so nice