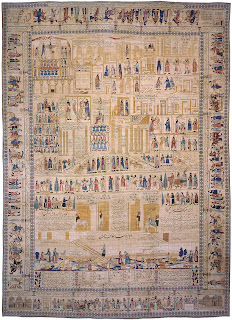 TEHRAN, Nov. 26, 2011 – If there is a gold standard for Persian carpets produced at the turn of the last century, it is the magnificent rugs woven and signed by master artists working in small studios.

These signature rugs remain legendary today, as do the names of the "ustads", or master weavers, who designed them.

Just five of the best known master weavers are:

Mohammad Hassan Mohtashem, working in Kashan in the late 1800s.

Aboul Ghasem Kermani, in Kerman at the turn of the last century.

Hajji Jalili, in Tabriz at the turn of the last century.

Fatollah Habibian, in Nain in the early to mid 1900s.

Agha Reza Seyrafian (or Seirafian), in Isfahan in the early to mid 1900s.

These masters, and the workshops they led, were so innovative in reworking traditional designs, devising new ones, and playing with color palettes that they were the recognized trend setters of their time.

Their work can be stunningly beautiful.

At the top of this page is a signed carpet by Aboul Ghasem Kermani. It is a hymn to ancient Persian history that depicts in astonishing detail the ruins of Persepolis, the 5th century BC palace of Darius I and Xerxes. The carpet is available from the Nazmiyal Collection of New York. 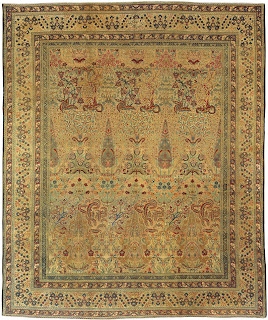 Here is another signed carpet by Aboul Ghasem Kermani. This one shows the designer's ability to work equally well with floral patterns. It, too, is available from the Nazmiyal Collection in New York.

The carpets of these master weavers have been copied so many times since their deaths that the weavers' names have become generic today for whole types of carpets based on their designs.

But the masters' original works have never been equaled and may well never be. That is because they are the product of a historical moment when Persia's carpet industry was reviving rapidly after centuries of neglect and the spirit of a renaissance was in the air.

The carpet industry had suffered badly during the period of political upheavals that wracked Persia in the 1700s and early 1800s and by the time stability returned many things had changed dramatically.

The royal court system, long the patron for the best arts, was severely weakened and economic power was increasingly passing into the hands of wealthy merchant families. They, and customers in Europe where Orientalism was by now in full swing, became a rich new market for Persian carpet producers who competed fiercely to win it.

The result was the birth of the modern workshop system of carpet production, the system which remains the basis for most oriental rug production today. Unlike the large court-supported workshops of the past, these new ateliers had to be smaller to be commercially successful. And whereas the court workshops had valued tradition above all, now there was increasing room for innovation, as well. 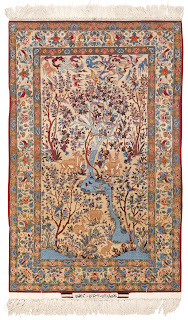 Here is a carpet by the master weaver Seyrafian available from the Nazmiyal Collection in New York.

The best workshops of the late 19th century and early 20th century in Persia functioned much like artists' studios.

The masters were sought after by the wealthiest customers, who commissioned rugs and paid in advance. The advance payment, in turn, provided the capital for the master weavers to obtain the best materials and hire highly skilled artisans.

Just how much status the customers accorded the master weavers was shown by the practice of signing the master's name into the rugs as they were woven – something virtually unknown under the court patronage system. The date the carpet was woven was also sometimes included.

Over the decades from the late 1800s to the mid-1900s, the master weavers brought new fame to many of Iran's traditional weaving centers. At times, they were directly associated with the successful revival of an individual city's weaving industry after it had slumped drastically during the previous centuries.

The master weaver Mohtashem is one example. He began work in Kashan around the 1880s at a time when the city's carpet weavers had long ago switched to making shawls. But even as he succeeded in the textile business, he could see it would soon collapse under the pressure of the new machine-produced textiles flooding in from Europe. 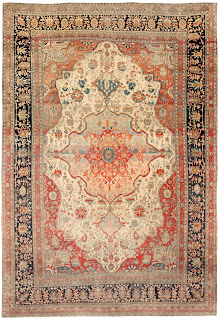 Here is a carpet by the master weaver Mohtashem available from the Nazmiyal Collection in New York.

According to legend, Mohtashem re-invented himself, and the city's carpet industry, when he married a woman from another famous carpet center, Sultanabad, who was a skilled rug weaver.

He provided her with Merino wool imported from Manchester – the wool he usually used for textiles – and discovered its high quality allowed a higher knot count for creating detailed motifs with a high pile.

The revival of Kashan's carpet industry, which had been dormant since the fall of the Safavid dynasty in 1723, quickly followed.

In 1890, records show, there were only three operating looms in Kashan. By 1900, there were 1,500 and by 1949 there were 4,000. Fueling most of the growth was Mohtashem's innovation – the use of Merino wool – which continued until the imported wool market crashed with the Great Depression.

Ultimately, Mohtashem's innovation was so successful that his own name became the generic name for all the Kashan carpets woven with Merino wool, which sometimes were also known as "Manchester Kashans." Only the fact that some of Mohtashem's own signed carpets remain helps to preserve the memory of the man himself, about whom little more is known.

A similar revival took place in Nain and is attributed to another of the master weavers, Habibian. 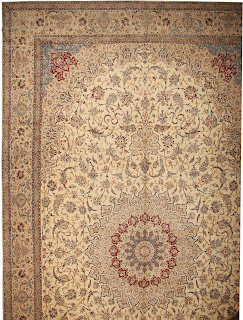 Here is an example of a Nain carpet available from the Nazmiyal Collection in New York.

Legend has it that Habibian was the son of the owner of a textile workshop producing abas, a woolen outer garment that usually is striped.

When the market for abas collapsed because clothing fashions were becoming more European in the early 1900s, Habibian switched full time to carpets along with his brother Mohammad.

The Habibians helped turned Nain, which previously had no history as a carpet center, into a city with a reputation for exceptionally fine pieces. Both the Habibian brothers lived and worked in Nain for decades before Mohammad died in 1986 and Fatollah in 1994.

Most of the Habibians' rugs bear their names but that is not the case for all master weavers. In many cases, just a few signed rugs remain and in others cases they are so rare that experts wonder whether some legendary names actually refer to a style rather than to an individual master and his workshop.

Hadji Jalili is one such example. The name is routinely used in the rug business to describe the beautiful floral rugs woven in Tabriz at the end of the 19th century. It also is believed to refer to a particular designer whose success in developing a trademark mix of lighter colors of pinks, gold and grays that helped rouse the famous weaving city from a long period of dormancy. 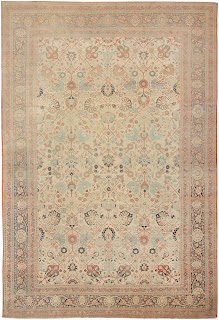 Here is a Hadji Jalili carpet available from the Nazmiyal Collection in New York.

Yet so many of the best Tabriz carpets have since been attributed to Hadji Jalili that they could not possibly all have been woven by a single master's atelier.

So, how should one regard the name Hadji Jalili?

When a master weaver has signed a carpet, then the signature offers clear documentation that the master existed and that the rug originated in his atelier.

But when this documentation provided by a signature does not exist, Nazmiyal says, it may make better sense to think of a master's name as the name of a period of weaving rather than just one person.

"The masters were trendsetters and the look they developed was what everyone was following, the customers and the other weavers," he notes. "They were like top fashion designers today and their impact was far bigger than what they alone produced."

Looking at it that way recognizes that – many decades later – it is not always possible to distinguish designers from the fashions they create and those they inspire. The mystery of who exactly Hadji Jalili was may never be solved, but the beauty of the work attributed to him will never be forgotten.