Spanish Rugs: When Spain Was Part Of The Islamic World

CORDOBA, March 25, 2013 -- Among the first oriental rugs to reach Europe were carpets woven in Europe itself.

Those rugs came from Moorish Spain, an extension of the Islamic world that once reached the Pyrenees and brought medieval Western Europe into direct contact with eastern art and culture.

From the first Arab-led invasion Moorish invasion in 710 to the defeat of the last Muslim kingdom in 1492, the Islamic presence in Spain spanned nearly 800 years.

During that time, the expanse of Muslim holdings rose and fell in contests with Christian powers, but major weaving carpet weaving centuries flourished for centuries in cities including Seville, Granada, Almeria, Malaga, and in the province of Murcia.

The carpets they produced furnished the luxurious palaces of the Moorish Spain but also were exported to other parts of the Muslim world and northward to Europe, where they were highly prized.

Often the carpets moved first to the Christian Spanish kingdoms in the north of the Iberian Peninsula. There they became part of Christian court life and moved further north to the castles of France, Italy, Britain and beyond.

Just when the Spanish carpet trade began is uncertain. But as early as the 13th century, when Spain’s rug industry was fully developed, writers were already speaking of it as long established.

A poet named al-Shakundi, writing in Cordoba, long the capital of Moorish Spain, notes that rugs made in Murcia, were already being exported to foreign countries a full century earlier.

When Eleanor of Castile, the wife of Prince Edward of England, arrived in London in 1255, chroniclers noted that rugs, presumably from Murcia, were ceremoniously displayed in the streets and at her lodgings at Westminster.

And even today, in the Palace of the Popes in Avignon, one can see a fresco from the first half of the fourteenth century that almost certainly depicts a Spanish carpet.

Who wove the Spanish carpets and what did they look like?

The weavers are generally believed to have been Moors, the Berber population of North Africa, and were part of a skilled artisan class in direct contact with contemporaries in other parts of the Islamic world.

The weavers were both aware of, and much influenced by, trends in the other great Islamic art centers of the time, including Cairo, Damascus, and Baghdad, and catered to a courtly culture that was largely the same across the Islamic world. 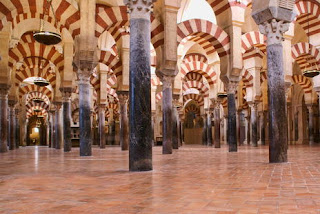 The emphasis was on luxury and classical elegance but also novelty and designs were freely exchanged between the fields of architecture, book illumination, and textile production as artistic trends came and went.

Here is a photo of the interior of the famous mosque in Cordoba, whose construction began around 784 to 786.

They include six- and eight-pointed starts, circles, triangles and cartouches and, often, borders with religious inscriptions in highly stylized and geometric Kufic script.

But in the fifteenth century, Spanish rugs changed dramatically.

By that time, the powerful kingdoms of northern Spain had pushed far to the south in their centuries-long effort to evict the Moors from the peninsula.

The important rug weaving center of Murcia fell into Christian hands and the Moorish weavers who stayed worked for European masters interested only in the European market.

The change created one of the most distinctive features of Renaissance-era Spanish rugs: their odd proportions. They are usually very long in proportion to their width, suggesting they were deliberately woven for the long, vaulted halls of churches, monasteries, and castles.

One thing European noble families desired most was carpets that could serve as highly personalized status symbols. Specifically, they wanted carpets that displayed their own family coat of arms in center field, in the place where a medallion usually might be.

The Spanish rug industry responded to the demand by producing “armorial carpets,” a curious hybrid product that was both Western and Eastern at once.

“Fifteenth century rugs show western heraldic emblems and coats of arms curiously combined with Oriental decoration. Birds and animals begin to appear, floral forms, and a more rhythmic flow of line. This is probably the greatest period of Spanish rug weaving. Often there are many elaborate borders and the field is divided into diamond-shaped panels or covered with large wreaths or circles. The influence of Italian Renaissance silk and damask patterns with their pomegranates, acanthus leaves and ogee panels is apparent.” 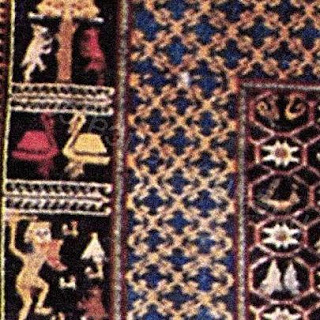 Interestingly, the angular stylized birds and animals that appear in the Spanish carpets of this time recall similar figures in early Anatolian rugs.

Another rug expert, M. S. Dimand, a curator at the Metropolitan Museum of Art in New York, notes that Anatolian animal rugs were clearly well known in Spain, as evidenced by the fact they appear in several paintings from the mid-fifteenth century.

He notes that among the Muslim element in some of the armorial rugs is “an inner border with a lozenge diaper containing a swastika – a motif that may be found in Anatolian rugs of the fourteenth and fifteenth centuries.”

Such eastern elements often competed for space in the border with bears, boars or wild men in a tree landscape that were clearly elements of European inspiration.

Among the oldest surviving rugs of this kind are the "Admiral carpets," so-called because their fields are overlaid with the coats-of-arms of the fifteenth-century admirals of Spain.

But there are indications the practice of commissioning carpets bearing owners' blazons originated still earlier, with some inventories mentioning such rugs even in the fourteenth century.

The Admiral carpets are surrounded by three to seven borders and on some carpets the human figures even include women in low-cut European-style dress. 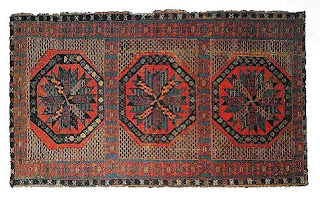 The rugs are named Holbeins after the early sixteenth European painter Hans Holbein the Younger because they closely resemble a type of Anatolian rug he depicted in a number of his paintings.

It is perhaps inevitable that Spain’s Moorish weavers, once isolated from the rest of the Islamic artistic world by the Christian Reconquista, would eventually lose their creative momentum.

The fifteenth, sixteenth and seventeenth centuries – known as the Mudejar period to refer to Moorish craftsmanship under Christian authority – produced many handsome rugs.

Among them are the so-called Alcaraz carpets, called after the city of the same name, which were unabashedly European Renaissance in their style. Here is an example of an Alcaraz rug, available from Nazmiyal Collection in New York,

But by the end of the seventeenth century the last of the Moorish craftsmen had departed and Spain’s oriental carpet era came to a close.

What’s left for us to enjoy in museums across Europe is a legacy of weaving that tells one of the carpet world’s most dramatic stories.