How Traditional Are Iran’s Modern Gabbehs?

Is it true that as life gets more complicated, designs get simpler?

There is one enduring example. It is Iran’s gabbeh carpet – today very simple, and very popular.

Gabbehs were not always the minimally decorated, sometimes single-color canvases they are now.

Originally, gabbehs had boldly colored, complex designs. Until the mid-1900s, they still looked more like tribal kilims than like modern abstract paintings.

Nejatollah Hakakian is a Hamburg dealer with many years in the rug business. He dates the change in the gabbeh’s design – and its rise to popularity in the West -- to just a few decades ago.

“Twenty years ago they started in Iran to do gabbehs with less and less designs and with tone-on-tone colors. So they changed from highly decorated carpets to more or less nothing in the field, with just a border around it, and sometimes not even a border,” he says.

“The rule today is three to four colors only, no more, when a normal Iranian carpet has seven to 17 colors. Now the Pakistans and Indians do the same, making carpets with almost no design. Mainly you just see the tone-on-tone colors.”

That simplification has had the effect of making gabbeh patterns, which have a centuries-old history among Iranian nomads, easy to mistake for Western contemporary designs. And it has made the carpet almost a household fixture throughout Europe and, increasingly in the United States.

Hakakian says he once asked a venerable German carpet dealer why European buyers did not prefer the many more complex workshop and tribal carpets Iranian producers could offer him instead.

The reply was one of the best insights Hakakian says he ever received to selling in the West.

“You Iranians are hungry to see grass that is green, but we are full of it in Europe,” the dealer told him. “We need calm and quiet, so the less design you have, the more of your carpets we can sell.”

But if the gabbeh has a heritage of rich, complex designs itself, how much of its contemporary look is still faithful to its past?

A great deal, according to Mahsa Heidarian, whose family company of the same name just won an award for Best Traditional Nomadic Carpet at the Domotex 2008 trade show in Hannover, Germany.

The Heidarians, based in the west-central Iranian town of Shahr-e-Kord, say they won by letting their nomadic weaver add her own personal touches to a design inspired by a nomadic masterpiece from the past.

"In nomadic carpets, we don't tell the weavers anything, because it is like abstract art, it has to come out of herself to be artistic," says Mahsa Heidarian. "We just try to choose the right person to do it, who knows the tradition of making nomadic carpets."

She adds that finding the right person is not always easy. "A problem is that there are increasingly fewer nomads in Iran who have a traditional weaving knowledge base," she says. "People are increasingly settling down."

The Heidarians say the simplified patterns of modern gabbehs are obtained by magnifying just one or more of the small parts found in a traditional gabbeh. Thus, just a medallion can be expanded, or just part of a field, into a whole carpet design. 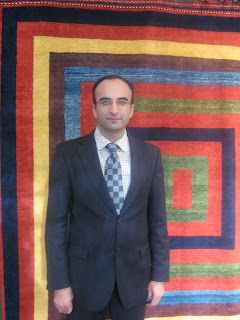 "This simplification responds to the Western market's preferences for abstract art but it is also true to tradition, because the simple element is there already," says Mahsa's husband, Arash.

He draws parallels with African art, whose spare lines so interested Europe’s abstract artists at the beginning of the last century. "There is the same immediate rapport between abstract art and nomadic art," he says.

One might argue that the rapport for modern buyers -- not all of them artists -- must go deeper than just recognizing familiar abstract patterns in a nomad's work.

Perhaps there is a longing in all modern societies for simpler things, and the art of tribal peoples -- which is the product of more elemental lifestyles -- helps to satisfy it.

True or false, gabbehs have done well exploring that possibility.

In the early 1990’s, gabbeh producers gained still more interest in the West by turning their backs on synthetic dyes in favor of natural dyes made from local plants, instead – the nomads’ traditional way of coloring the carpets. The return to nature was so successful that the carpet was one of the main attractions at the 1992 Grand Exhibition in Iran.

Authors Murray L. Eiland and Murray Eiland III note in their book ‘Oriental Rugs’ that “the next year there was such a boom in new gabbehs that it had created a wool shortage throughout the country.

The gabbeh’s marketing also got a boost from Iran’s film industry when prominent director Mohsen Makhmalbaf agreed to do a movie centered on the carpets and the Qashqai nomads who weave them. The drama, simply titled “Gabbeh,” was commissioned by an organization dedicated to the export of handicrafts, but it won prizes both at the 1996 Cannes and New York film festivals.

Gabbehs are hardly the only weavings to grow simpler over the decades and become more popular with Western buyers in the process.

Hamburg dealer Hakakian points to carpets woven by Tibetan refugees in Nepal as another example.

"The Tibetan carpet was the first with no design, just one or two colors, no flowers, no medallion. There was a high demand for that until about two years ago. The Tibetan was almost only white or off-white. Gabbeh went with darker tone-on-tones, terra cotta, blue, black, red."

Hakakian says that the Tibetan and gabbeh producers are keenly aware of each other and learn from each other's successes. The main difference between them may be in how rooted they remain in their own traditions.

The Tibetan refugees were encouraged to weave by Swiss aid agencies which helped them resettle in Nepal in the 1960’s. Today, joined by many Nepalese, the refugees are a major weaving pool for Western interior designers.

The gabbeh weavers have never had to leave home. And while some are amenable to design suggestions, the best still stick closely to their own interpretations.

A Magic Carpet Ride Purchasing a Handmade Tibetan rug -- Without Getting Rolled
http://money.cnn.com/magazines/moneymag/moneymag_archive/2003/05/01/341270/index.htm
Posted by Tea and Carpets at 07:48

Hi. thanks to share Very informative article regarding gabbeh carpet.As Iranian Carpets are really very famous and exports all over the world because of its various variety and types.

This is a great blog with excellent posts and links.
Thanks for sharing.

This is a great blog with excellent posts and links.
Thanks for sharing.