HANNOVER, Germany; January 16, 2008 – Almost all the space for exhibiting handcrafted carpets at the annual Domotex trade show in Hannover (January 12 – 15) is devoted to woven rugs.

But at one stand, an Italian textile design house is displaying something one rarely sees at carpet shows. It is a roughly-textured felt mat as big as a sheet and its surface is brightly painted with an abstract design. The look is similar to a painting in a modern art gallery. 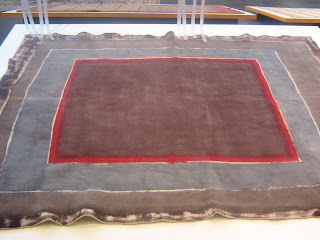 Even the Italian textile house 'Weave,' which produced the felt is not sure whether it is a wall-hanging or a carpet. But the Turin-based group is confident it can find a place in the market for home furnishings.

The inspiration for the product came during a trip to Nepal. While visiting a cooperative development project, one of the company’s owners was struck by some small felt purses being made for tourists.

But when the Italians asked the felt workers to try making a large felt carpet using local designs the results were unsatisfactory. So, instead of trying to recreate traditional motifs from Nepal, the Italian company asked the local producers to just make 60 large white felt carpets instead.

“We decided to make plain felt, plain white, and then bring them over to Italy and get an artist to paint on them. And from there we have had a very good feedback,” says Amanda Smythe, who is one of Weave’s representatives.

The positive feedback includes a nomination at Domotex for the carpet with the best modern design – an astonishing feat considering the low-esteem in which felt is held by most carpet connoisseurs. In the end, the felt creation did not win the prize but the company plans to go ahead with preparing more felt pieces.

In most of the world, felt is still used for inexpensive cushioning in packing cases, or for inexpensive – but itchy -- blankets and jackets, or simply as floor pads to protect more expensive woven carpets.

But where felt is still used as artwork, it has a long tradition.

In Central Asia, felt carpets are still placed on the floor of a yurt, where the thick wool helps insulate the tent from the cold ground beneath.

In Iran, too, felt was once the preserve of originally nomadic Central Asian groups like the Turkmen. Over time it also moved into homes, where room-sized pieces were used as floor covering to fill the gaps between more cherished woven carpets. But today, felt making is almost a lost skill and Iranian carpet shops barely stock it.

Still, pieces of new Iranian felt occasionally show up at Western carpet shows. That is thanks to periodic efforts by dealers to rescue what is almost a dying art. 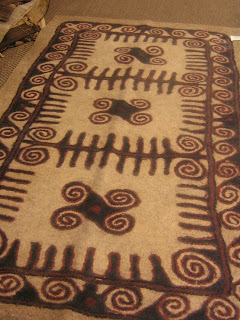 Abolfazi Ramezani, who is based in London, displays several felt carpets that he has commissioned with contemporary patterns that resemble colorful, abstract paintings. But unlike the Italian-designed felts, the colorful designs are not painted on. Instead, they are applied in the traditional, back-breaking way, which is by kneading pieces of colored felt into a larger felt background.

Ramezani says dealers from Japan and Spain seem to particularly like the felt pieces, because “they are different than any other oriental carpet you see.”

One reason the felt-made carpets are striking is that they usually have different designs applied to the front and back. And the prices are affordable. At wholesale, they range from 70 to 130 euros per square meter – which is at the low end of handmade carpet prices.

Can the market for felt carpets grow larger?

The answer lies in part with Western retailers who, for now, seem barely acquainted with the art form. But it also depends on whether felt producers will continue to make such a labor-intensive product once the standard of living in their home countries rises.

And, says Ramizani, there is still one more player to consider, one that is neither a producer nor a buyer – though it certainly is a consumer.

That player is the humble moth.

“I have been told the moth has a special interest in this quality and they immediately start eating up the wool,” says Ramezani.

He notes that old felt pieces from Iran show considerable moth damage – attesting to their attraction for one of mankind’s most faithful house companions. Making felt less tasty could be one of the first challenges for anyone seriously trying to broaden the market.

Alibaba: Kyrgyz Felt Rugs
Posted by Tea and Carpets at 07:43

I Love to drink tea, specially green tea. this one can give you a lot of benefits to your health. Tea can prevent cavities, fights cholesterol, eliminates fat, longer life ... and a long list of properties that make this tea a real preventive medicine. so if you don´t drink frequently, is better begins drinking.

The felt carpets were once staple of nomadic people. Read to know more

Joshua vs Ruiz 2 UK ring walk time CONFIRMED: When does ... The huge heavyweight clash will be shown live on Sky Sports Box Office.