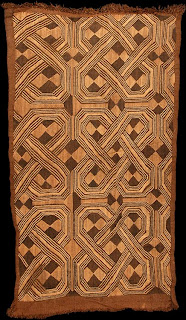 It should be, of course, thanks to some simple rules of thumb.

For example, fabrics are used for clothing and upholstery, while rugs mostly go on the floor.

And while both are woven, fabrics usually don't have a pile like knotted rugs do.

But then one runs into an extraordinary form of weaving which breaks all these simple rules and makes collectors wonder how to display it when they get it home.

That something is a boldly patterned, pile-cloth which is woven from wool-like palm fibers in the Democratic Republic of the Congo.

It goes by the name of the people who make it: the Kuba.

Most collectors – and this unusual art form has many – elect to display Kuba weavings by hanging them on the wall, like a prized small rug. 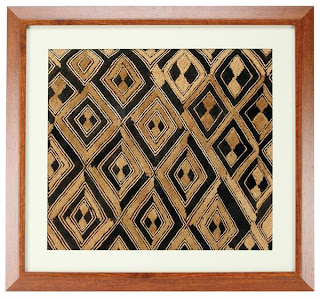 But the Kuba people themselves weave the cloth to make ceremonial dresses worn by both men and women.

For them, it is clearly a fabric and one so prized that people wear the dresses only to attend major events like funerals.

When a person dies, he is buried in one of his dresses so his ancestors will recognize him by the family pattern he wears.

Where does one begin to tell the history of Kuba weaving? Perhaps by noting that it is an ancient tradition about which little is known beyond the last hundred years.

The reason for the short time-frame is that unlike other fabrics, the fine palm fibers from which the cloth is made is as degradable as any other plant. Unless it is carefully preserved in dry conditions, it rarely outlasts its own creator's generation.

Here is a grove of raffia palms, showing the size of the leaves from which the fibers are made. 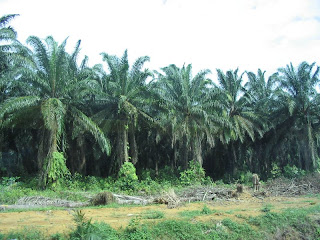 Ephemeral or not, the Kuba weavings are powerful enough that they have long been prized as trade items by other peoples living around the Kuba's home region.

That region is between the Kasai and Sunkuru rivers, in the west-central part of the DR Congo (formerly Zaire), in a vast area of savannah and forest land that is reachable with a long boat journey from Kinshasa to the river port town of Ilebo.

The subgroup of the Kuba considered to be the best weavers of all is the Shoowa. They were recorded as living here as early as the 17th century.

Margaret Blechman, author of "Discover Shoowa Design," a booklet prepared for the Smithsonian Institution's display of raffia textiles at the National Museum for African Arts in 1988, describes the cloths and their creators this way:

"In the past, raffia textiles were used as money. The Shoowa exchanged them for other goods. Raffia textiles are still worn, enjoyed for their beauty, and kept as treasured possessions.

"For men, a woven and embroidered raffia strip may be used as a decorative border on a wrapper worn for special occasions. For women, several squares of raffia cloth sewn together made a wraparound skirt. At funerals, particularly court funerals great numbers of raffia textiles may be displayed to honor the deceased." 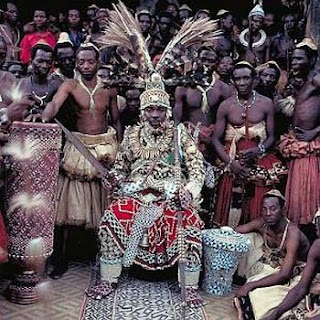 Here is a photo of the Kuba court taken in the mid 1900s.

The first Europeans did not reach the Kuba kingdom until 1890. When they did, they were immediately struck by its elaborate codes of ceremony and dress. So much so, that photo sessions with western magazines like "Life" became de rigeur, with Kuba kings using the opportunity to further the reputation of the Kuba as the foremost artists in central Africa.

The massive amounts of decorative bead-work visible in the photo attests to the wealth the kingdom acquired from trade with neighboring peoples.

The beads themselves are a legacy of the European slave trade, when glass-makers first in Venice and later also in several northern cities manufactured vast quantities of decorative beads as exchange currency to use in Africa and the New World. The slave trade, based on the coasts, did not directly reach the interior Kuba lands but the bead-based economy it created spanned the continent. 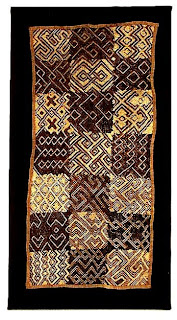 To make their rug-like fabrics, the Kuba pound palm fibers until they become soft and threadlike and as easy to dye as wool. The loops of the fine threads are trapped between a warp and weft of sturdier fibers using a loom, and the loops are later cut and trimmed to form an even pile.

Each weaver -- it can be a man or a woman – decides individually whether to make a cloth with a uniform design or vary the designs in midstream, even several times. Traditionally, they do not use preliminary sketches.

What all the weavers do have in common is an agreed vocabulary of shapes, each with its name. Here are just a few: an intertwined loop (called Imbol, or basketworking); a hexagon with or without smaller hexagons inside (Iyul, or tortoise); and a triangle with two angled arcs (Lakiik, or eyebrows).

The shapes can be combined to create intricate mazes that constantly surprise the eye by attracting it in different directions.

After Europeans found the Kuba lands, Kuba textiles began to regularly reach art dealers in Brussels and Paris, who sold them as "African velvets" in the 1920s. Among the artists in Paris who saw them in shops or museums and were particularly drawn to them was Henri Matisse.

Matisse, who was born into a family of textile makers and had a life-long interest in both painting and fabrics, hung panels of Kuba textiles along his studio walls next to the bark cloth he brought back from his 1930s trip to the South Seas.

He wrote in letters to his sister that he often looked at the panels for long periods, waiting for design ideas to come to him.

Art historians say that Matisse's correspondence indicates that the Kuba designs may have been the inspiration for the paper cutouts that were his final major works, such as his 1951 'Snow Flowers'.

The website of New York's Metropolitan Museum of Art notes in an article entitled 'African Influences on Modern Art' that in his cutout collages Matisse blends "a vivid color palette with the allover patterning of the textiles to produce abstract floral forms free-floating in space, creating perspectival shifts between foreground and background."

The abstract patterns displayed in Kuba cloth are equally believed to have served as a source of inspiration for artists such as Klee, Picasso, and Braque. 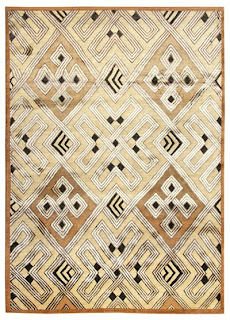 Probably it should be no surprise that in recent years some rug makers have explored recreating Kuba designs in wool and silk.

Here is one example sold by Landry & Arcari in Boston. The "Shoowa" is a 100 knot rug using Tibetan wool, mohair, and silk and woven in Nepal. It is approximately 6 feet by 8 feet 6 inches in size. (See 'Afro-Tibetan Fusion Rugs' at Landry & Arcari's blog.)

please email me to discuss
my interest

It would be a very nice experience to be a advertiser of the blog, I would luv to be that, can you contact me at my email: vm9@live.in
thanks !!!

Hey.. this is a good one..it seems the author knows the subject well. It is a good site indeed. Liked it.eh.. good one. )).

Thank you for your nice post, as we know, Fresh toward the Arctic Collection, inspired by our iconic Expedition Parka, the Canada Goose Parkas is acknowledged getting a slimmer and trendy edition, wonderful for that town.Canada Goose Citadel Parka could be the best option toward freezing weather. Features a comparable 4 fleece lined, zippered hand warmer pockets invisible in the rear belonging toward chest and decrease pockets. These a range of pockets are terrific area for storing tiny items. The Canada Goose sales has an adjustable bracing cable tv set inside the hood for support, supplying exceptional defense in considerable wind conditions. With its 625 fill energy lumination duck slicing you are limited getting kept warm, for the coldest of winter days, although nonetheless assisting you sustain a trendy Canada Goose Expedition Parka.

Love the design of rugs.They must be very expensive..There is plenty to gain from the blog post..
Carpet cleaning brisbane

wall to wall Carpets in Dubai are one of the most beautiful ideas for interior décor. A carpet spread with the right color combination blends beautifully with the surroundings making the entire area colorful and vibrant. So it entirely depends on your choice, choosing a brighter shade adds colors to the room and the dull ones, shade. Carpet Flooring Dubai offers the widest range of beautiful carpets customized according your required dimensions, colors and designs. Fo rmore details:http://www.carpetsdubai.com

This article is very useful, thank you for sharing. And allow me to share articles too, it's about health and treatment. God willing it will be useful for us all. Thank you :)