Rags To Riches: The North American Art Of Hooked Rugs 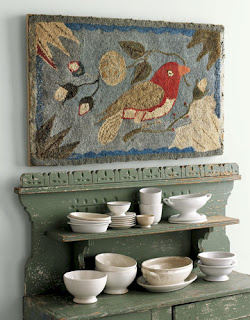 BOSTON, November 20, 2010 -- It is always fascinating to see how rugs in so many parts of the world originated as practical necessities but evolved into items of art.

One example is hooked rugs.

They are a peculiarly North American creation that began as floor coverings and today are just as likely to be prized wall hangings.

In the process, they have become one of the more enduring handcrafts in Canada and the United States and a medium for endless creativity.

Just how wide ranging they can be is shown in the rug below by Massachusetts artist Margaret Arraj.

It is in the style of a Khotan carpet from east Turkestan in the 1700s, inspired by the original in the Metropolitan Museum of Art in New York. 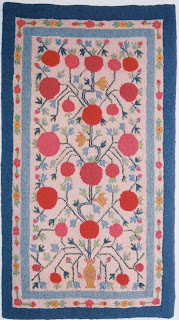 Arraj, whose rugs are for sale at her website Mill River Rugs is particularly interested in ethnic floral designs and old textiles.

As she says, her designs “honor the artistic life and tradition of a variety of countries. In this way, they bring us closer to other cultures and times.”

But most hooked rugs do not wander so far from home.

Instead, they take their themes from North American folk culture as they depict flowers, wildlife, people, historical events, geometric patterns or simply express the imagination of the artist.

And in that way, hooked rugs today remain surprisingly close to their origins in the in the 19th century.

Just how hooked rugs evolved in the 1800s is a fascinating story.

Author William Winthrop Kent writes that the earliest forebears of hooked rugs were the floor mats made in Yorkshire, England in the early days of the industrial revolution.

At that time, workers in weaving mills were allowed to collect the excess pieces of yarn that were by-products of the work. The pieces, which were called “thrums” and usually some 9 inches (23 cm) long, were valuable to the workers because yarn in general was expensive and the products of the mills were affordable only to the middle and upper classes. 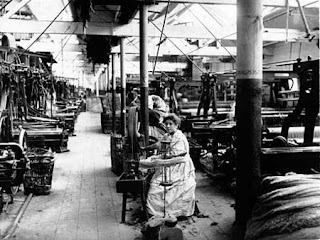 The mill workers put the thrums to good use.

They pulled the strips of yarn, one by one, through a grid backing to make carpets. The backing was linen or burlap or any other such heavy material and the tool for pulling the yarn through was a simple hook with a wooden handle.

Later, this technique transferred to North America, specifically to New England and the Canadian Maritimes, and flourished.

It became a favorite way for poorer households in these regions to produce colorful floor covering at a time when most 19th century homes had unsightly floors that were hastily cobbled together by the builders from softwood boards of random sizes.

Because yarn was expensive, and always saved for knitting sweaters, poor families without access to thrums usually made their hooked rugs using scraps of ordinary cloth.

But no matter what fabric was used, the hooked rugs were more attractive than the common alternative at the time: inexpensive mats woven from coconut fiber, straw, or corn husks. 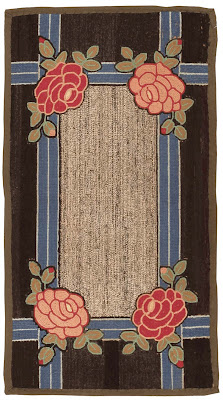 Here is an antique hooked rug. It is available to collectors from the Nazmiyal Collection in New York.

One might expect hooked rugs to have died out once machine-powered carpet weaving, invented in the 1830s, developed sufficiently to produce cheap carpeting in massive volumes. And by the 1870s, machine weaving was doing just that to solve people’s flooring problems.

But instead of disappearing, the pastime of “hooking rugs” passed from being a household chore into a hobby.

Over time, as standards of living improved with the industrial revolution, the materials used in the rugs also upgraded.

By the 1930s, when artists and author Pearl McGown widely popularized the art by publishing formal guidelines for it, the “pile” material had become wool strips and the rugs – as they are still called – had become wall hangings.

In their heyday as a floor covering, hooked rugs were often produced by poorer families and even businesses for sale commercially.

The most ambitious products were hooked carpets of living-room size. 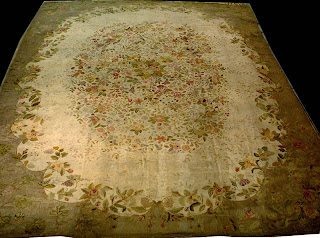 Such old pieces today are highly prized and are sold by some dealers in North America as “American Hooked” rugs right alongside antique oriental ones.

And, because there is not enough supply of the large antique hooked rugs to meet demand, there is also a market for reproductions. That's as some American decorators try to recapture the look of New England homes of days gone by, particularly for vacation cottages.

The commercial reproductions, made outside of North America, exist side-by-side with the very active output of rug hooking hobbyists and artists across Canada and the United States.

As always, the hobbyists continue to hook rugs for their friends and family but, unfortunately, only rarely for sale.

For a video demonstration of how hooked rugs are made, and examples of folk art motifs, click on this YouTube link:

Thank you for the informative post on a traditional American craft. I'd love to feature this post on my blog (Let's Talk About Floors) because of my reader's interest in products made in the USA.

If you approve, I'd like to post a short snippit of this post on my blog with a 'read more' link directing people to the full post. This would also include a short blurb about your blog.

I look forward to hearing from you & your next post.

Although those rugs could look good on the wall near my cupboard, I can't help but think how careful one must be on those, especially in the realm of carpet cleaning. Mount Prospect seem to have a lot of houses with that kind of rug. I don't know if it's a fad there or it's their tradition, but you've got to admit, it's very tasteful to have inside the house.

thank for such informative post, i enjoy it to read lo

Thanks for posting about this, I would love to read more about this topic.

Thank you for your nice post, as we know, Fresh toward the Arctic Collection, inspired by our iconic Expedition Parka, the Canada Goose Parka is acknowledged getting a slimmer and trendy edition, wonderful for that town.Canada Goose Citadel Parka could be the best option toward freezing weather. Features a comparable 4 fleece lined, zippered hand warmer Canada Goose Expedition Parka invisible in the rear belonging toward chest and decrease pockets. These a range of pockets are terrific area for storing tiny items. The Canada Goose Sale has an adjustable bracing cable tv set inside the hood for support, supplying exceptional defense in considerable wind conditions. With its 625 fill energy lumination duck slicing you are limited getting kept warm, for the coldest of winter days, although nonetheless assisting you sustain a trendy Canada Goose Expedition Parka.

Finally had a brief biography dedicated to a web-page: http://artistmarcbreed.blogspot.com/

Thanks for sharing this content with us
carpet tiles suppliers dubai

Want to watch Nelson vs Mir 2 live? We explain how to watch Bellator 231 Mir vs Nelson (Rematch) online from anywhere, using with DAZN.
Mir vs Nelson 2 live stream

The Western sydney 7s 2020 streaming is Australia's newest premier Rugby Sevens tournament, which is an exciting sporting spectacle for Western Sydney and NSW.