The Mysterious World of Chintamani And Bird Carpets 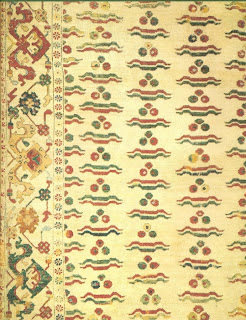 ISTANBUL, December 5, 2009 -- Some of the most striking carpets of the Ottoman era are as white as a painter’s canvas and covered with finely drawn, mysterious icons.

The mysterious icons are the “chintamani,” three balls hovering over a pair of cloud-like wavy lines. And for much of the 16th and 17th centuries, they held a special fascination for Ottoman court artists.

The chintamani appear on silks, ceramic plates, tiles, book-bindings, and embroideries. Sometimes, they even appear on the kaftans worn by the Ottoman sultans. 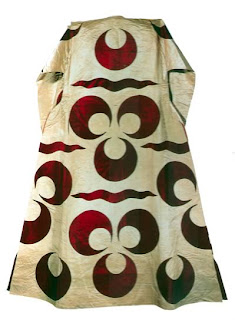 This kaftan, from the mid-17th century and now kept in the Topkapi Palace museum, is an example.

The huge scale of the design, which was typical of Ottoman royal costumes, made the Sultan visible even in large crowds as he appeared in public.

The chintamani design was so popular in all the decorative arts of the time that it was probably inevitable it would spill over to carpets as well. And that is exactly what many rug experts believe happened.

Rug expert Louise W. Mackie writes in “A Turkish Carpets with Spots and Stripes” (Textile Journal, 1976) that it is “highly probable” that the origin of the chintamni carpet design can be traced to the symbol’s popularity in the art of the Ottoman court in Istanbul.

But what is much harder to explain is where the symbol of the chintamani itself originated and what it means.

In carpet literature, the design is often said to derive from a Buddhist emblem. The word chintamani itself comes from Sanskrit and in Buddhist philosophy signifies a treasure ball or wish-granting jewel.

A Buddhist background for the design is an appealing argument because it also recalls the distant past of the Turkic tribes who migrated to Anatolia from Central Asia and created the succession of dynasties that culminated in the Ottoman Empire.

The original cultures of the Turkic tribes were based on religions like Buddhism and Shamanism for millennia before they converted to Islam.

But if the three-ball pattern appears in early Central Asian painting and even is associated with the badge of the great Turkic-Mongol conqueror Timur (Tamerlane) in the 14th century, there are still parts of the symbol that a Buddhist origin cannot easily explain.

Particularly puzzling are the paired stripes that appear in combination with the floating balls.

Some scholars think that the eye-catching combination may have evolved from mixing a Buddhist motif with much more worldly patterns inspired by animal skins to create an instantly recognizable symbol of power.

The argument here is that the stripes and dots are similar to tiger stripes and leopard spots on the kinds of furs powerful rulers may have worn as symbols of their office.

But perhaps the only certainty about the chintamani design is that comes from Eastern Asia, is very old and, despite every effort at interpretation, remains as mysterious as ever.

The chintamani pattern was used both for carpets woven in the Ottoman court workshops of Istanbul or Cairo, and in commercial workshops in towns like Selendi around the city of Ushak (Usak, Oushak) in western Anatolia.

The two kinds of weaving centers – royal and commercial – produced their own distinctive chintamani patterns.

The Ottoman court carpets (right) have the spots placed above the raised center of the stripes. 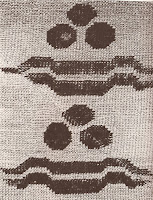 But the Anatolian carpets (left) have the spots placed above the lowered center of the stripes.

Why this happened is just another mystery associated with this most mysterious of designs.

The chintamani pattern proved so popular that it was woven for hundreds of years, both on white and colored backgrounds, long after the passion for the design faded in the Ottoman court itself.

Today, the motif has finally passed from rugs, too, but it remains popular in Turkey on plates and other household items.

All this makes the chintamani design one of the great success stories in Ottoman carpets. But it is not the only mysterious pattern to be set against a white background in the 16th century that achieved lasting fame.

Another is the so-called “Bird” pattern, which also was produced in or near Ushak and was much prized in Renaissance Europe. 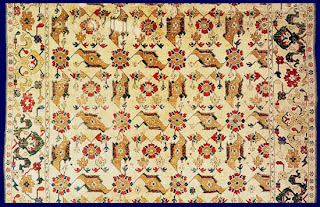 Europeans used the term “Bird” because the design could easily be seen to represent a bird, with its head, wings, and tail.

But in fact the design is a floral pattern of leaves attached to rosettes.

The sharp, birdlike angles are simply the result of Anatolian weavers doing what they did to all Ottoman-era floral designs: converting them to more geometric to fit their own weaving traditions and techniques.

Some researchers believe that the Bird pattern is actually a variation of the chintamani design.

The late Ferenc Batari of the Budapest Museum of Applied Arts suggested the Bird pattern may have evolved from weavers experimenting with framing the floating balls of the chintamani within different arrangements of paired lines. 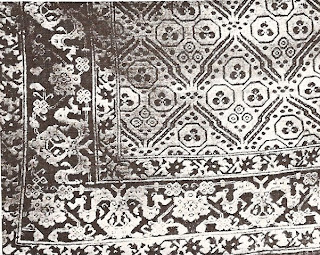 Batari presented this carpet as a possible step along the way in his article “White Ground Carpets in Budapest" (Oriental Carpet & Textile Studies II, 1986).

If Bird carpets did indeed evolve this way, it would be an interesting example of how one successful carpet design gives rise to another as weavers constantly explore new ideas.

White carpets decorated with chintamani, birds, or other mysterious symbols viewed as crabs or scorpions fascinated the European market, where they all were referred to popularly as “White Ushaks.” 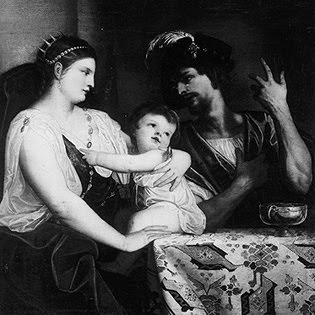 Here is a Bird carpet circa 1625 in the painting ‘Mother, Child and Gentleman’ by Alessandro Varotari.

Three hundred years later, in the early 1900s, the fascination with White Ushaks remained strong enough to inspire one the few short stories specifically about carpets in European literature.

The story is ‘Birds and Chintamani,’ written by Czech novelist Karel Capek in 1929. It describes the discovery of a carpet that, by all known rules, cannot exist. That is, a white carpet on which the two famous designs of birds and chintamani are combined together.

The discovery of the carpet, tucked away in stack of unsold items in a Prague rug shop, changes the collector’s life forever.

You can read the story by clicking here: Birds and Chintamani.

Wonderful article! To me personally, the chintamani was always reminiscent of the fifth character of the perso-arabic alphabet, "se". Do you think this may have any validity?

A very entertaining and informative post! For more on this subject see Chintamani and the Roerichs.

The carpet mentioned in the linked story really exists. It belongs to an old Prague family.

how nice and beautiful patterns for a carpet, I might "steal" one of those patterns to order a new carpet for my room, I need it, thanks for the idea!

Those carpets are just stunning and I would love to add them in my room soon.
Bond Cleaning Gold Coast

Such a great blog you have shared. Get the affordable discontinued karastan rugs at awcarpet.com which help to enhance the look of your home.