The flower carpet does not last long: just three days and four nights. And the amount of work is immense, with hundreds of volunteers arranging some 700,000 begonias (knot count of 300 flowers per square meter) into a meticulously planned pattern. 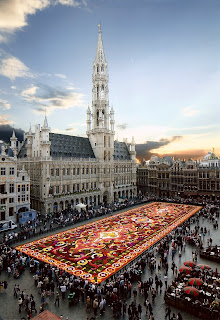 The annual event, which began in 1971, reminds the world that Belgium is the world’s biggest producer of begonias -- exporting about 48 million bulbs a year.

Plus, the flower carpet reminds everyone that Belgium also is one of the world’s largest makers and exporters of carpets -- machine-made.

Savonnerie carpets were first produced in the early 1600s and combined Eastern pile-rug weaving with French Baroque designs. The success of the patterns – whose motifs include flower bouquets, fleur-de-lys, fruits, and acanthus leaves – was so great that it swung European taste away from oriental rugs for two centuries. 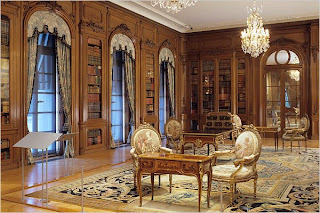 Here is a Baroque carpet in the kind of typical French interior design that defined Western standards of elegance at the time.

Just how Europe developed its own handwoven carpet industry is a fascinating story with two parts.

The first is the deliberate effort by French kings to monopolize the luxury carpet market in Europe, which was previously supplied from the East.

The second is the coincidence of this effort with a sudden feeling of Western cultural superiority as Europe’s kingdoms first became world powers.

Some steps along the way:

* King Henri IV (1533 – 1610) decides to revive France’s luxury goods industry, which was decimated in France’s wars of religion. He provides leading artisans, including weavers, with workshops in the Louvre.

** Weaving master Pierre DuPont establishes the style that will become famous as “Savonnerie.” The name is taken from the Paris soap factory which becomes the location of a major carpet workshop in 1644.

*** European forces defeat the Ottoman army besieging Vienna in 1683. The victory convinces High Renaissance Europe of its cultural supremacy over its Eastern rivals.

**** King Louis XIV bans the import of oriental carpets into France, protecting French production and ending the huge outflow of revenues to buy luxury goods from the East.

Europe’s handwoven carpets had many variations, including Savonnerie and Aubusson in France and, later, Axminster and Wilton in Britain. 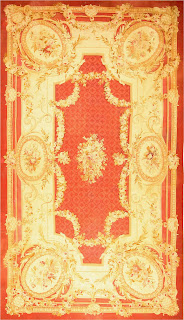 Here is a 19th century Aubusson carpet from France. The carpet is available to collectors from the Nazmiyal Collection in New York.

Such carpets were commissioned only by courts and by the very wealthy. Their patterns proved adaptable enough to be a centerpiece of furnishing from the Baroque and Neoclassical periods into the Napoleonic era.

It was Napoleon, in fact, who gave the Savonnerie factory its last great royal support. Beginning in 1805, he commissioned carpets in the Empire style that defined his age.

The Savonnerie’s story finally ends in 1825 when the manufactory was incorporated with another weaving workshop, the Gobelins, which was famous for tapestries. By this time, the passion for European handwoven carpets had faded under a new set of social circumstances.

Among them was colonialism. As Europeans expanded across the globe, they came again into direct contact with oriental artwork and renewed their interest in it. By the mid-1850’s imports of oriental rugs were booming, along with Orientalism in general.

But perhaps still more fateful for the European hand-knotted carpet industry was the invention of the steam-powered loom in 1785. Carpet producers quickly discovered they could earn much more with mass production for the expanding middle class than they could with artisinal production for just the very rich. Within 50 years, the great names in European handwoven rugs disappeared or became associated with machine-made carpets instead. 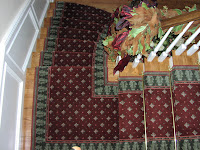 Does all this make Brussels' Savonnerie flower carpet a bittersweet souvenir of Europe’s rug-making industry?

Champions of hand-knotted carpets might say ‘yes’ if it reminds them too much of a glorious past gone forever.

But one can also argue that history must take its course and that the way Savonnerie carpets evolved into today’s multi-billion dollar machine-made carpet industry is as amazing as any other aspect of the rug trade.

If so, the Savonnerie which bloomed in Brussels' Grande Place this year from August 15 to 17 is a perfect symbol for Europe’s carpet world.

Renaissance Carpets and Tapestries Company
Posted by Tea and Carpets at 10:44

the responsibility of the reform of the government departments should bear the most core obligations, fake gucci belts as soon as possible to break the pattern of interests, to promote the reform of natural gas competition mechanism. Although this national lack of gas is a case, but can provide a third idea for future reform. http://www.boardgamesofold.com/ Share to Sina microblogging to four countries as the core of the real estate regulation of the New Deal jittery occasion, December 22,