Rising production costs are causing some Iranian producers to move operations to India and Pakistan, where labor is less expensive.

Particularly feeling the squeeze are companies which try to weave the highly ornate styles that traditonally have made Persian carpets so famous.

Those styles include Hadji Jalili -- a highly complex design originally produced in Iran from 1880 to 1925 by a renowned Tabriz workshop of the same name.

Today, producers say, recreating that level of detail using highly skilled weavers in Iran is prohibitively costly. A Hadji Jalili is woven with dozens of colors, making its production an extremely time-consuming and painstaking process.

One company that set out to recreate the Hadji Jalili carpets in sizes suitable for mansion rooms -- where they traditionally go -- soon found itself looking to the subcontinent instead. 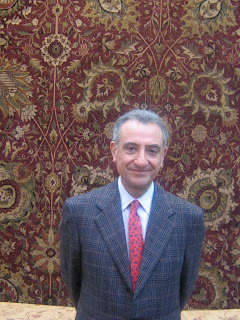 "If we wanted to produce this quality in Iran, it would cost four to five times as much," says Kambiz Jalili, an owner of the U.S.-based firm Hadji Jalili Revivals who attended this month's Domotex carpet fair in Hannover, Germany.

He adds, "The majority of weavers even in an area of India accustomed to making very fine and very intricae designs refused to weave these because in every rug we have anywhere from 16 to 30 colors and there may be eight colors which are so similar that it is extremely difficult for the weaver to distinguish between the yarn colors and it is very easy to make mistakes."

The complexity of the rugs puts them at the high end of carpet prices -- about $ 1,750 per square meter retail. By the time they are woven large enough to fit a palace ballroom, the retail price becomes about all the market will bear.

Asked if his customers truly are palace owners, Jalali says "they better be, to be able to afford them!"

Producing a quintessentially Persian carpet outside of Iran may seem like an extraordinary example of global outsourcing.

But as Iran's economy grows with high oil prices -- which today are around $ 100 a barrel -- Iranian producers say they increasingly find themselves struggling at home.

Sadegh Miri is one of the owners of Tehran-based Miri Iranian Knots. He says that over the past 10 years, the cost for weavers in Iran has gone up "300 to 400 percent."

Miri has remained successful by focusing on antique collectors. That is another wealthy clientele which will buy new rugs of classical quality if antique ones cannot be found in the dimensions and colors they seek.

It is high-end business like Hadji Jalili Revivals but, due to the labor costs, one restricted to much smaller carpet sizes. Miri's retail prices, which reflect the differences in the Iranian and Indian production markets, range from $ 2,500 to $ 7,500 dollars per square meter.

Does the multi-generational company fear that one day it will have to relocate?

Miri brushes off the suggestion with a laugh. "If that day comes, I will stop working," he says. "I will stay in Iran and continue until the market decides."

But Miri does predict that much of Iran's lower-end carpet production will eventually follow the global migration to lower-cost lands.

"In the future, only the high-end carpets will survive and the commercial end will go to India and China because we can't compete with them regarding the prices," he says. "Even now, many Iranian producers have gone and they are in India or Pakistan and they are producing there."

Not just labor costs are rising, so are the costs of materials. 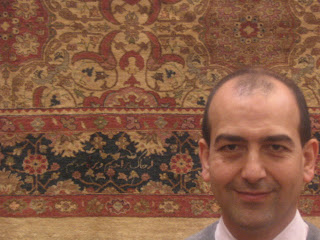 Hossein Attaran of Tehran-based Carpet Heritage says that particularly affects producers who use natural dyes and handspun wool. Those are the materials an increasing number of carpet makers bank upon to revive flagging customer interest in their industry.

Attaran says decades of mass carpet production using synthetic dyes and machine-spun wool have flooded the market with low-quality pieces from every carpet-weaving country. That has left buyers jaded and looking for less artificial products.

But as interest in organic carpets -- those colored with plant-based dyes -- grows, so do the prices of the materials themselves. Madder root, a source for red dyes, has shot up from 70 cents a kilo a few years ago to $ 4 a kilo today. Handspun wool today costs $ 10 dollars a kilo, or five times more than machine-spun wool.

That creates pressure to convince the public the difference is worth it. And in Iran it only adds to the difficulties of persuading buyers to buy expensive Persian carpets from their homeland rather than lower-priced look-alikes from elsewhere.

Carpet Heritage this year presented a new line to emphasize the long history of art and culture unique to Persian carpets. Its limited edition of "Persian Poem Carpets" has a quatrain from Omar Khayyam subtly and elegantly woven into the border of each piece.

"Bringing the two forms, poetry and carpets, together shows a very traditional way of Persian thinking about how we should appreciate life," Attaran says.

Iran’s hand-woven carpets are one of its biggest export commodites after oil. The country exported some $400 million of hand-woven carpets in 2006, the latest figures available, with the United States and Germany as the biggest destinations. The carpet industry directly or indirectly employs some 1.4 million people.

I'll mention it on my Rug Fanatics discussion group - perhaps add us to your links:

Best of luck and I for one will certainly visit regularly.

All the best,
Iain Stewart

This is a great blog of yours, very informative. I'm also an Iranian abroad and our website address is ParsaFlora.com. Please feel free to visit and let me know what you think for a link exchange.

Thank you for joining us. his article is very helpful