A Trove Of Turkish Kilims In A Small Prague Museum

PRAGUE, February 18, 2008 -- The pretty baroque capital of the Czech Republic may not seem a likely place to find a museum collection of antique village and prayer rugs from the remotest corners of Turkey.

But the rugs – 1,265 of them – are stored in vaults for the city’s small ethnographic museum, the Naprstek Museum of Asian, African and American Cultures located in the heart of the ‘old town’ district. Bequeathed to the museum in 1994, they are still awaiting a complete cataloguing and a permanent display space.

Dagmar Pospisilova, head of the museum’s Asian Department, says the collection is the largest of its kind outside of Turkey. It ranges from simple and complex kilims to sophisticated pile carpets produced in workshops. The rugs come from villages and towns in both western and eastern Anatolia and offer a rich illustration of Anatolian folk traditions. 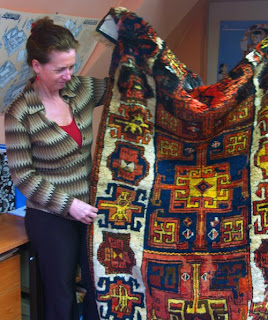 Dr. Pospisilova shows as an example a 19th century pile carpet woven by nomads as a sleeping mat in Central or Eastern Anatolia.

How the collection came to Prague is a story almost as fascinating as the pieces themselves.

The owner was the late Rainer Kreissl, an antiques dealer who specialized in many different forms of art, from European to Asia. But he had a special personal attachment to two things in particular: African statuary and Anatolian weavings.

He began his collecting during the 1960’s, at a time when rare finds were still possible in Turkey as well as Africa. And he had the money and contacts to pursue the best.

Born in 1924, in then Czechoslovakia, Kreissl originally was expected to follow his father’s profession as a hops farmer. But an early childhood success selling a mosaic he made of discarded bits of porcelain to an aunt convinced him to follow his artistic instincts instead.

Fate, however, often disrupted his plans. His mixed Czech-German family was spared the expulsion of ethnic Germans from Czechoslovakia after the second world war. But the communist rule that came next was far from favorable for a professional art dealer.

Kreissl’s eye for collectibles attracted members of the foreign diplomatic corps and, with them, the attention of the Czechoslovak intelligence service. The police wanted him to be an informer. Knowing the consequences of refusing, he fled to Germany in 1963.

There, he arrived penniless. But he soon joined a prominent auction house for fine arts, later becoming the head of its Munich branch. Later still, he spent six years as an independent dealer in San Francisco.

His wide travels took him to Turkey at a time when most museums were still interested in acquiring Ottoman carpets and most collectors were looking for West Anatolian prayer rugs from Gordes or Milas. He was among those just beginning to turn instead to village rugs that offered other expressions of traditional Anatolian weaving.

As he told an interviewer once: “I went to workshops, to homes, to mosques, and I began to get a reputation as an eccentric, who would buy any old tattered rag. Later, people began bringing things to me themselves.”

Just how the antique rugs found their way to Kreissl’s home over the succeeding years remains one of the enduring mysteries around his collection. It is generally believed they came with the tide of Turkish guest workers into Germany. The workers smuggled in valuable pieces obtained from mosques -- legally or illegally— to sell for extra income. Kreissl would have been well placed in Munich to buy them.

“By the 1990’s,” they observe, “collectors began to take an interest in early Anatolian pieces that were often fragmentary and had apparently migrated from Turkish mosques and other repositories to Western collections in little over a decade.”

As for Kreissl, he kept his trade secrets secret. But he was always ready to buy to a good piece, whether or not he had the money on hand.

“Once I didn’t have enough cash, so I paid with a new luxury car,” he recalled.

As he became an expert on Anatolian village rugs, and wrote about them, he urged Westerners to stop regarding eastern weavings as ‘oriental,’ that is, outside of their own art history. Instead, he argued, Turkish motifs draw on many pre-Islamic sources, including Western and Christian traditions.

Among the evidence he cited were similarities between some rug motifs and the patterns found in Hellenistic art or in the painted markings on columns in Cappadocia’s underground churches.

Kreissl’s death in 2005 at the age of 81 leaves his argument unresolved. But his donation of his entire collection, intact, to a single Prague museum puts it within the reach of other rug scholars should they want to try to prove, or disprove his thesis.

The collector's gift to the museum was honored by the Czech Republic with a set of two commemorative stamps in 2003. One shows a Turkish prayer rug, the other - shown here -- a Turkish carpet for everyday use. Both images were taken from rugs now in the Naprstek Museum.

Several years before Kreissl died, a journalist asked him to identify the most consistent source of joy in his life.

“When I discover something,” he replied. “I don’t have to actually own it. I am simply happy that I discovered something beautiful that otherwise people would overlook.”

Amazon: Infinite Variety (by Rainer Kreissl 2000)
http://www.amazon.de/Unendliche-Vielfalt-Anatolien-Rainer-Kreissl/dp/3777487201
Posted by Tea and Carpets at 04:53