Epic Journey: How A Trio Of 1920s Adventurers Filmed The Bakhtiari Migration 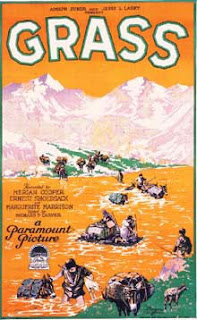 But what is less known is how much they once fascinated Western cinema audiences.

Eighty years ago, people crowded into movie theaters to see a silent film about Iran's nomads that has since became a classic of documentary movie-making.

The film is "Grass: A Nation’s Battle for Life," released in 1925. It follows a branch of the Bakhtiari tribe on its seasonal migration to summer pastures. Along the way, it offers an astonishing look at a nomadic way of life which, today, has all but disappeared.

The film was made by three intrepid Western adventurers and begins with their traveling east from Angora (today Ankara), following the caravan routes to Iran. As the trio says at the outset, they are in search of a "Forgotten People" -- the nomads -- whose life is unchanged since primordial times. And they find their subject in the Bakhtiari tribes, which migrate with the rains and grass to survive.

The epic feel of the film comes from the scale of the migration: 50,000 people herding half a million animals on a 500 mile trek. And the drama and suspense grow with the spectacular nature of the terrain. A raging river and a 5,000 meter high mountain range separate the nomads from their goal.

One unforgettable scene is the crossing of the Karun river, which is swollen with Spring snow melt. The tribes have no boats to cross and the racing water is a forbidding sight. But as proof of the age-old ingenuity of man against the elements, they have a solution. 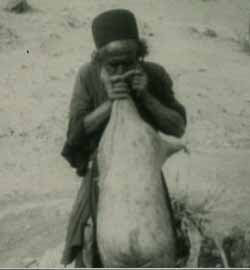 The nomads' answer is to inflate goatskins and use them as floats for rafts to carry across the women, children, and weakest animals. The men paddle across individually, holding onto their own floats like inner-tubes. Whether anybody can swim and, indeed, whether it is even possible to swim in such rough water without drowning, is left to the imagination.

The Karun river, Iran's most voluminous, originates in the high peaks of the Zagros mountain range in Chahrmahal va Bakhtiari Province and flows to the Persian Gulf. The nomads cross it only to face their next and still more daunting challenge -- crossing the mountain range itself.

The difficultly of the task can best be imagined by thinking of the Alps. The crossing point is a snow-covered mountain called Zard Kuh which rises up 4,500 meters, just a few hundred meters short of Mont Blanc's 4,800 meters. There is no visible trail over it and, as the thousands-strong, barefoot tribes march toward it, no hint they will find one. 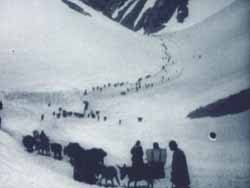 But, again, there is a solution. The first groups of men unpack shovels and, in the same way one might dig out a driveway, steadily clear a path up the mountain. It is unimaginable work, made possible only by the sheer numbers of men available. And over a period of days, the hordes of humans, goats, and mules zig-zag their way up the slopes and over the range.

Such scenes cannot be seen today on anything like this scale. All over the world, nomads have been steadily settled by governments determined to end the land disputes that arise from herders moving freely over vast territories. And, indeed, as this 1925 movie makes clear, past generations of nomads moved like small armies. The thousands of tribesmen have rifles slung over their shoulders and could both hunt game and fight the authorities with them.

But for anyone who might think that the nomads, once settled, simply become like everyone else, the film is a welcome reminder of just how extraordinarily different the nomads' experience is. And the images can only increase one's interest in the mysterious symbols that even settled nomads continue to weave into their carpets -- the echoes of primal hopes, fears, and strengths.

That story is almost as interesting as the film itself.

The co-directors -- who doubled as cameramen -- are two American soldiers who remained in Europe after World War I. As Central Europe fell into a power vacuum with the defeat of the German and Austro-Hungarian empires and the civil war in Russia, they joined the fight to carve out an independent Polish state. 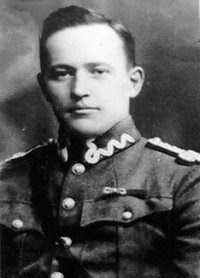 One of the pair, Merian C. Cooper, was a volunteer pilot in the fledgling Polish air force and flew numerous missions against Russian troops until he was shot down in Ukraine. Taken prisoner, he escaped again eight months later. (He is shown here in Polish Air Force uniform).

The other, Ernest B. Schoedsack, worked with the Polish war relief.

The third member of the team, who appears on camera chronicling the migration, is Marguerite Harrison. She was an American journalist with the Associated Press who also spied for Washington in Russia and Japan. She was imprisoned for ten weeks in Moscow's notorious Lubyanka prison. 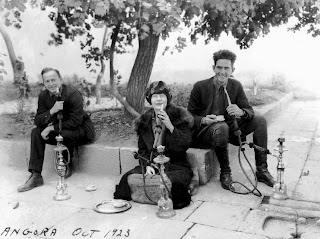 The three, who all met in Poland, decided to film the Bakhtiari migration following the box-office success of one of Hollywood's first documentary and ethnographic films: Nanook of the North (1922). Here they pose in Ankara in 1923 at the start of their journey. Their own highly adventurous life imminently qualified them for their work, which included nearly freezing to death with their subjects.

"Grass," was commercially successful and launched Cooper and Schoedsack on lifelong careers as filmmakers. The two went on to make a documentary in Thailand ("Chang" in 1927) and later teamed up again to make the 1933 classic "King Kong." 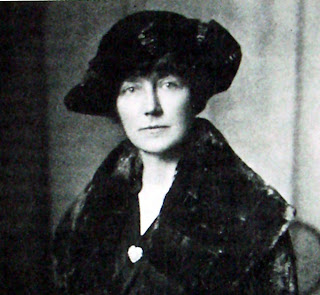 Harrison, who wrote several books about Russia and Asia, later co-founded the Women's Society of Geographers and the Children's Hospital of Baltimore.

The lives of southwestern Iran's nomads have continued to fascinate film-makers ever since "Grass."

The story of the Bakhtiari migration was retold in "People of the Wind" (1976), which followed the migration in reverse.

And the nomadic Qashqai were recently featured in "Gabbeh" (1996) by Iranian director Mohsen Makhmalbaf.

All of the films are currently available on DVD.

The whole of "Grass: A Nation's Battle for Life" also can be viewed on the Internet: CLICK HERE

Always a fantastic read, Thank you!