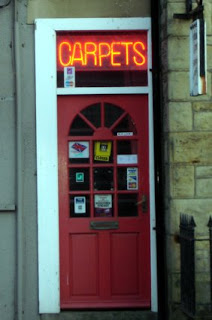 After all, it is a place where so many opposites meet.

Things made by the world's poorest people become objects of desire for the richest ...

Tradition fights for a place in modern life ...

So, what a pleasure to discover a new novel set entirely in the carpet world that is now appearing -- in chapter-by-chapter installments and free-of-charge -- on the Internet.

The novel, "When A Dragon Winks" is by San Francisco carpet dealer and writer Emmett Eiland and has a lot of attractions. It is funny, rich with insights into the rug business, filled with eccentric characters, and -- perhaps best of all -- has a page-clicking plot.

Here is the link: When A Dragon Winks

Just briefly -- so as not to spoil the fun -- here are some of the main characters.

There is a young carpet store owner trying to get his start in San Francisco.

There is a con man who appears like a good genie in the young man's store and suddenly makes his business take off -- but seems to have ulterior business motives of his own.

And there is a socialite who has climbed as high as she can in the museum world but wants to go much higher.

Plus there is one more highly volatile ingredient: an ancient Chinese dragon rug rumored to exist but never seen -- a rug so valuable that, if it were to appear -- it could make or break anyone's fortune.

What are some of the behind-the-curtain peaks into the rug business this book offers? Here is one description of the young carpet dealer, Holden Carter, as he sits musing in his store:

"He had heard of an African tribe that was said to urinate in rituals on objects to make them powerful. In the West, rather than urine, it was age that imbued objects with power and value.

"Nothing made a piece of furniture more desirable than to uncover it in an attic where it had been stashed away for 200 years. Oriental rugs, he believed, owned their mystique — their fabled reputations as magic carpets and flying carpets — to the fact that often they survived long enough to become quite old. The older a rug, the more valued it was.

"Nevertheless, as Holden’s antique rugs grew six months older and then a year and finally two years older while going unsold in his store, rather than gaining in power and value, they began to lose their magic for him. It was hard to stay in love with rugs that had been passed over by so many shoppers."

It would be unfair to talk of rug novels and speak of only one.

There are least two other novels that are partly set in the rug world which have appeared in recent years and deserve mention.

One is The Rug Merchant by Meg Mullins.

"New York City teems with quiet desperation in this lucidly written but languid debut novel. The titular carpet salesman, Ushman Khan, has left his mother and his wife, Farak, in Iran in order to make a new start in America.

"Told from Khan's perspective, the narrative traces his subtle acculturation into Western life while he sets up shop and develops loyal customers like the wealthy socialite Mrs. Roberts. He plans for his wife to join him, but learns that she has divorced him for a Turkish salesman.

"Crushed, Ushman buys plane tickets to Paris he will never use and finds temporary, self-loathing comfort in a prostitute. Only when he meets Stella, a Barnard freshman, does he begin to see a way out of his isolation.

"Like him, Stella is an outsider struggling with loss and looking for connection, but Ushman must first resolve his conflicted feelings about women and sex and American culture.

"Originally developed as a short story that appeared in The Best American Short Stories 2002, this melancholy novel droops under the weight of a sympathetic but tentative, passive protagonist who can find no real solution to his profound alienation."

Another book is The Blood of Flowers by Anita Amirrezvani.

A review by Publisher's Weekly describes it this way:

"In Iranian-American Amirrezvani's lushly orchestrated debut, a comet signals misfortune to the remote 17th-century Persian village where the nameless narrator lives modestly but happily with her parents, both of whom expect to see the 14-year-old married within the year.

"Her fascination with rug making is a pastime they indulge only for the interim, but her father's untimely death prompts the girl to travel with her mother to the city of Isfahan, where the two live as servants in the opulent home of an uncle — a wealthy rug maker to the Shah. The only marriage proposal now in the offing is a three-month renewable contract with the son of a horse trader.

"Teetering on poverty and shame, the girl weaves fantasies for her temporary husband's pleasure and exchanges tales with her beleaguered mother until, having mastered the art of making and selling carpets under her uncle's tutelage, she undertakes to free her mother and herself.

"With journalistic clarity, Amirrezvani describes how to make a carpet knot by knot, and then sell it negotiation by negotiation, guiding readers through workshops and bazaars."

Altogether, these three novels offer a wonderful library for people who like reading about carpets. And just like carpets themselves, no two of them are the same.

The Rug Merchant: Synopses and Reviews
Posted by Tea and Carpets at 06:06