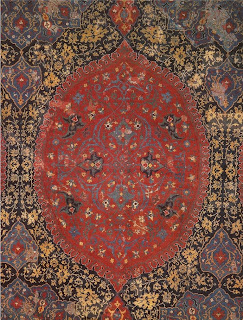 ISTANBUL, October 17, 2009 – Do carpet designs change with the fortunes of war?

It may not seem likely, but many historians have long attributed the changes that occurred in the design of Ottoman carpets in the 16th century to the battle of Chaldiran.

That battle was fought on a hot August day in 1514 and is famous for several reasons.

It marked the Ottoman halt of the vigorously expanding Safavid Empire under that empire’s founder, Ismail.

And it marked the first time that a Muslim army massively deployed artillery and musketry in the field. The Ottoman’s use of large-scale firepower devastated Ismail’s troops, who still relied upon the time-honored force of archers on horseback.

Before the battle, the two emperors, both of whom were Turkic speaking, exchanged belligerent letters daring each other to fight. In one, the previously undefeated Shah Ismail, who had already expanded from his base in Tabriz to conquer Persia, wrote:

I know the Truth as my supreme guide,
I would sacrifice myself in his way,
I was born yesterday, I will die today,
Come, whoever would die, here is the arena.

But how badly Ismail was defeated can be judged from the fact that he himself was wounded and almost seized and his harem with two of his wives was captured in the mayhem. After the defeat, which established the boundary between Turkey and Iran as it remains today, Shah Ismail never personally led his army into battle again. 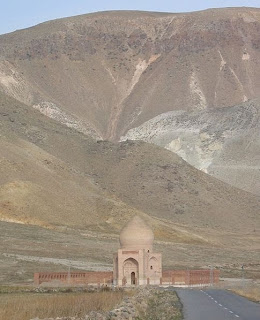 Here is a photo of the memorial marking the battle-site near the Turkish border in northwestern Iran.

The victorious Ottoman sultan, Selim I, later made this comment about the confrontation: “A carpet is large enough to accommodate two sufis, but the world is not large enough for two Kings.”

Perhaps more directly related to rugs, the battle also led to the Ottoman’s brief occupation of Tabriz, the then-capital of the Safavids.

The city was a major weaving center for the new Safavid style of floral medallion carpets and, when the Ottomans withdrew several weeks later, they allegedly took top artisans from the city back to Istanbul with them.

This has long been seen by rug historians as one convincing way to explain why, around this time, carpets woven for the Ottoman court suddenly moved from being geometric (see: Renaissance European Painters’ Passion For Turkish Geometric Rugs) to a new floral medallion style of their own. 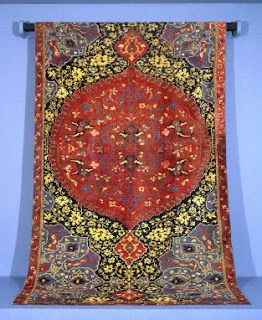 Here is a picture of one of the new Ottoman court medallion rugs, from around the 16th century.

“Unlike other Turkish rugs these are extremely finely woven with a design vocabulary – the so called “saz” style that includes curvilinear medallions, palmettes, scrolling vines, and elaborate lancet-shaped leaves.”

The authors add, “The sudden appearance of such lushly naturalistic vegetation within a tradition that had previously produced coarser rugs in geometric designs has raised many questions, particularly since these (new) rugs are woven with the asymmetrical knot.”

The Eilands suggest the temporary Ottoman capture of Tabriz could be one explanation. They also suggest that the Ottoman’s capture of Cairo three years later, this time by using massive firepower against the Mamlukes, could equally be a factor.

Both Safavid and Cairene rugs were asymmetrically knotted – a knotting system which allows weaving of greater detail than does the traditional Turkish symmetric knot.

Still, if the Ottoman court carpets moved to a floral medallion style, they did not duplicate Safavid designs. They are very much their own variation on the theme.

Safavid carpets had a single large medallion that appeared to be floating like a picture in a frame created by four quarter-sized corner medallions.

But the Ottoman court carpets often had not one medallion but several columns of medallions.

The central medallion is still the focus, but identical, partial medallions float above and below it. Other, non-identical partial medallions, float beside it. The result is the impression that the medallions go on forever, in an endlessly repeating pattern extending beyond the rug.

This sense of an endlessly repeating pattern was heightened by the fact that these rugs were huge compared to other Ottoman rugs, often reaching a length of five to seven meters. They were palace carpets, conceived by professional artists and woven on huge looms by master craftsmen in court workshops in Istanbul or in the commercial center of Usak (Ushak, Oushak) in western Anatolia.

The differences between Ottoman and Safavid floral medallion rugs make some researchers wonder whether the Ottoman design revolution can really be explained merely as the result of the fortunes of war.

Another possibility now gaining ground is that the Ottoman and Safavid floral medallion carpet styles originated quite independently and more or less simultaneously as the result of trends in the shared artistic culture of the region. 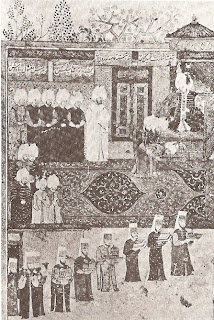 Here is an Ottoman miniature painting from 1570, showing a medallion rug. It is from the illustrated book, the Sehname-i Selim Han, that celebrates the achievements of Sultan Selim, the victor at Chaldiran.

The argument for a shared regional culture, rather than Anatolia’s borrowing of the floral rug style from Safavid Persia, is based on some interesting bits of recent research.

But art expert Julian Raby argues that the ovid Ottoman carpet medallions closely resemble the medallions tooled in leather on the covers of Ottoman manuscripts that date from the 1460s. That’s earlier than the Safavid rugs.

Here is an Ottoman bookbinding from the early 1500s for comparison. The resemblance to the Ottoman court carpet is especially close in the drawing of the medallions’ scrolling and interlocking floral forms.

Raby puts his argument this way: "The Ottoman carpet revolution was comparable to the change being wrought at the same period by Timurid designers. However ... the Timurids resorted to a different compositional formula in freeing their carpet designs from the geometric traditions. Their is therefore no need to argue a direct Timurid influence on Medallion Usaks. There development should be seen not in the context of a specific carpet influence but of a general change in Ottoman decorative arts." ("Court and Export: The Usak Carpets" by Julian Raby, Oriental Carpet and Textile Studies II, 1986)

But if the floral revolutions on both sides of the Ottoman-Persian border were indeed two manifestations of a single “international style,” what would that say about the way art evolves? The message in this case, happily, would be that art is the world of shared ideas and inspirations, not of kings and wars. 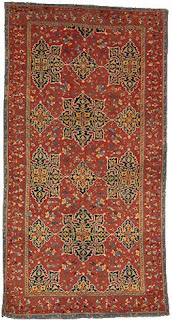 The Ottoman court carpets came in two main variants: those with ovid medallions and those with star-shaped medallions. It is not known which style predates the other. Here is a Star Usak from the 16th century.

Ottoman court carpets continued to be woven for many centuries and their complexity was such that one might expect, incorrectly, that they would have a minimal impact on Turkish popular weaving. After all, their giant formats were much too big to fit ordinary looms and Turkish popular weaving, in any case, has always preferred geometric designs.

But, in fact, the court carpets had a massive influence. As textile expert Walter B. Denny notes in his book ‘The Classical Tradition in Anatolian Carpets’ (2002), “the new designs diffused into the lexicon of the town and village industries and adaptations of the court medallion rugs from Usak and elsewhere soon appeared.”

Town and village weavers adopted the floral designs by making them more geometric and that created a whole vocabulary of new designs that still influence Turkish weaving today. 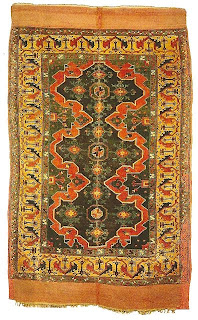 Here is just one example: a three medallion carpet from Usak in the 16th century.

This process of highly complex, curvilinear court designs being re-interpreted into geometric patterns by town and village weavers was not limited to medallion rugs.

The “geometrization” of highly curvilinear court prayer rugs by village and town weavers would create some of Turkey’s most successful commercial carpet designs and set off a European passion for Turkish prayer rugs in the 19th century.

But how that happened is the subject of another story.

It's an interesting concept and one no one has thought of before.

Discovered your blog, and I just want to say THANK YOU - spectacular photos, and I enjoy your commentary. Found you through a link over at www.RugCareCentral.com. Thank you!

those are beautiful rugs!

Nice to be visiting your blog again, it has been months for me. Well this article that I've been waited for so long.

Thanks for the info about carpets.

Great post. I think one of the basic things that we should know know is that we must always make sure that you are safe in every transactions you wanted to indulge with.

I would like to say that this blog really convinced me, Thanks for posting.
Handmade Oushak Rugs