From Table To Wall To Floor: Oriental Rugs Keep Moving Around European Homes

PRAGUE, May 9, 2008 -- Oriental carpets are the great nomads of European homes

Over the centuries, few furnishings have moved around as much as they have. Rugs have been put on tables, hung on walls, stretched over sofas, displayed on floors and, finally, tucked under the furniture.

In the process, they have helped express the social values of their owners – from medieval merchants looking for status symbols to modern families looking for creature comforts.

All this makes the history of rugs in Western homes a fascinating study.

Rug experts date the first imports of oriental carpets into Europe to around 1200 – the time of the fourth Crusade – or earlier. The knights leading the crusades were keen observers of Eastern court life and eager to acquire the trappings for themselves.

By 1300, Europe’s court painters began to show some of these acquisitions in their artworks and by 1450 the depictions are so highly detailed they can be cataloged. The carpets – then all from Anatolia with geometric motifs – appeared in many paintings with Christian religious themes and were usually placed at the feet of the Virgin Mary or on the steps of alters. One example is Alessio Baldovinetti’s Madonna and Child with Saints, circa 1454. 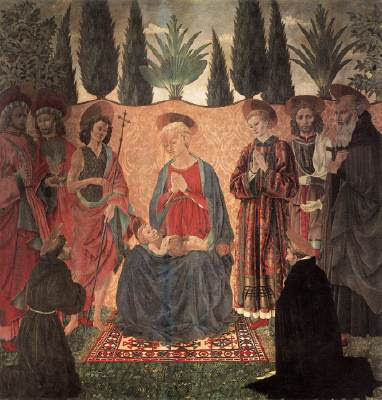 Giving the carpets such a place of honor in religious paintings may have been a reflection of the awe the oriental rugs inspired in the European public. And it may show how easily the Eastern textiles found a place within Europe’s own tradition of using luxurious tapestries as symbols of power and prestige.

Through the 1400s, carpets began to become sufficiently available to rich Europeans to also appear in portraits of the nobility and wealthy merchants. By 1450, paintings of festivals in cities like Venice and Florence show wealthy merchant families draping their rugs out their windows for all to see.

The public displays seem intended to emphasize the wealth of the merchant families and their growing social status as Europe moved into the Renaissance. And the rugs from distant lands seem a perfect symbol of the cosmopolitan mood that accompanied Europe’s emergence from centuries of feudalism.

By 1550, Persian carpets began to be imported into Europe along with Anatolians. The Persian court pieces, with their curving floral patterns, equally became part of the portraits of the rich and powerful – only now oriental carpets were displayed most frequently on top of tables. 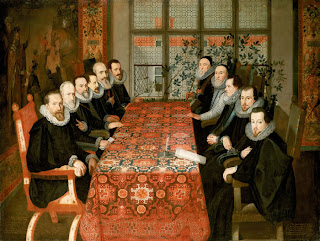 At times, the tables included conference tables, as in a famous portrait of British and Spanish officials concluding a treaty in 1604 over an Anatolian. This painting is The Somerset House Conference, by Juan Pantoja de la Cruz.

Carpets continued to be draped over furniture in European houses through the 1600s and 1700s, but by 1800s they were on the move again.

During the 1800s, the accelerating industrial age made many Europeans and Americans wealthier and they began acquiring the luxury goods of the rich, including oriental carpets. The new owners experimented with putting rugs of many different sizes in many different places in their homes.

The first half of the century saw carpets move onto the walls and, in small formats, onto the floor. They were status symbols to be displayed and, when they were on the floor, other furniture was pushed back to give them pride of place. Different designs became associated with particular rooms. A lady’s boudoir would have a bright and floral Persian rug. A man’s study or smoking room would more likely have a red-and-black Turkmen.

But by the second half of the 1800s, the trend was toward big format carpets covering more and more of the floor. As a result, carpets began to go under furniture. Compared to the earlier taste for putting carpets on top of tables, this was history stood on its head. Yet the practice, and the sense that a carpet – or carpeting – adds comfort to a room but need not be considered as artwork continues today.

Could carpets one day come off the floor again? If they do, there are two directions in which they might go. 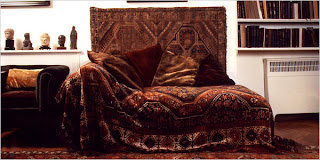 One direction is suggested by Europe’s periodic taste for draping colorful carpets over sofas. The famous Austrian psychiatrist, Sigmund Freud, raised his couch to iconic status partly by covering it with a beautiful nomadic Qashqai rug. He maintained that the mysterious motifs in the carpet helped his patient relax and wander back into their memories more easily.

At times, carpets even have become the upholstery of the furniture itself. Jon Thompson writes in his 1983 textbook 'Oriental Carpets' of a fad in the 1870s and 1880s for cutting up tribal carpets to use them as the covering fabric for armchairs. He credits the destructive practice with saving at least parts of some valuable rugs that might otherwise have been worn out by use on the floor. The fad inspired one German businessman, Carl Wilhelm Koch, to machine-weave furniture fabrics in Turkmen and Qashqai designs.

The other direction is for carpets to go back onto the walls, the usual place for artwork. They have often been there before. The 19th century craze for prayer rugs from across the Islamic world made many homes look like museums. And still today, a small silk rug of almost any design is more likely to be hung than walked upon.

The future is never possible to predict. But it is interesting to think that putting an oriental carpet on the floor – so automatic today – is historically a recent trend in Western interior design. And if history is a guide, it may only be a step on the way to something else.

Kilim Sofas
Posted by Tea and Carpets at 22:51

Let us know if you have any comments!
canadian pharmacy

If you had some way of rating posts I would for sure give you a high rating my friend!
canadian pharmacy

Thanks for posting, definitely going to subscribe! See you on my reader.

Your post really cool. I glad to be here. I enjoyed reading your articles and if allowed I want to bookmark your posts....

I notice really quite a number of blogs that look interesting and really worth a read. There’s nothing worse than browsing through limitless blah blah blogs simply to locate a couple which keep your interest. Thanks. Good job!

As i am working in a carpet manufacturer company,and i think this article must help me in this business.TO know more about the history off the carpet is really such a inspiration for me.Thanks for this post and keep posting such a good post on carpet.

You are right,it's difficult to predict the future! Putting an oriental carpet on the floor is a recent trend in Western interior design. And this may be a step on the way to something else. Choose Research Paper Topics for your projects!


The article is very interesting. And I also want to share articles about health, I'm sure this will be useful. Read and share it. Thank you very much :)