CHAHARMAHAL District, Iran; May 2, 2008 – When Iranian photographer Javid Tafazoli was walking through a weaving village in the mountains of Chaharmahal va Bakhtiyari province, far to the west of Isfahan, he saw an arresting sight.

It was a cascade of recently dyed red wool hanging from a tree. In a world grown used to garish colors, the mellow brick-red shades looked like a startlingly natural part of the landscape. He snapped the picture and entitled it simply “Red.” 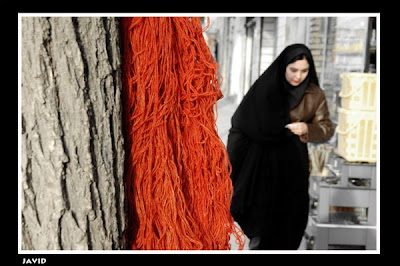 The same picture could be taken in many villages in Iran today, where weavers are increasingly returning to using natural dyes. They hope that going back to traditional materials will raise the quality of rugs and the value people put on them.

But if there is a new desire to derive red from age-old sources such as the root of the Madder plant, which gives hues ranging from pink to rose to scarlet, another ancient group of reds seems certain not to return. They are the once famous insect reds.

For centuries, dyers dried and powdered insects to produce colors ranging from pink-lilac through bright crimson to deep-brown-purple. In many areas where the dyes could not be produced locally, they were prized imports.

The first insect dye to be traded in large commercial quantities was Indian lac, derived from the Caccus lacca bug. The insect, which feeds on ficus trees in India, was also a source for lacquer and shellac used on furniture.

The fame of Indian lac grew so great that it was exported over huge distances. In their authoritative book ‘Oriental Carpets,’ Murray L. Eiland and Murray Eiland III say the dyes have been detected in Safavid and Ottoman court carpets as well as on 19th century Turkmen rugs. That is despite the fact that madder was the standard and abundant source for red from Turkey to Central Asia.

Later, lac gave way to still higher quality reds obtained from the Indian’s bug’s distant cousin, the South American cochineal. The cochineal reds -- traded in the Aztec and Mayan empires and still used in Mexico and Peru (below) -- were discovered by Spanish conquistadors in 1519. 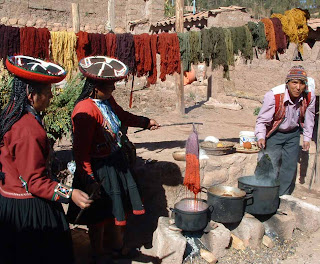 The Europeans considered cochineal to be the perfect red dye because it is stable, easily absorbed by fabrics, and extremely resistant to fading.

The brilliant red comes from the carminic acid in the body of the female cochineal larva, which also makes the bug unpalatable to predators. The Spanish bred the bugs for size and color and created huge ranches of cactus – the bugs’ favorite home. To produce a kilogram of the dye required some 155,000 dried insects and, by 1770, at the peak of the trade, Mexico was exporting some half a million kilos a year.

The global business in cochineal dyes is documented in the 2005 book ‘A Perfect Red: Empire, Espionage, and the Quest for the Color of Desire’ by Amy Butler Greenfield.

Eventually, the Spanish expanded cultivation of the bugs to the Canary Islands and North Africa. But the lucrative business finally came to an end with the invention of chemical dyes in northern Europe in the mid 19th century. Within decades, cochineal red, along with madder, virtually disappeared from use under a tide of synthetic replacements.

Now, in a world saturated with artificial colors, natural dyes are slowly making a comeback. But, in a strange twist for the carpet industry, the once so abundant and highly sought cochineal dyes remain forgotten. The reason is economics.

After they were swept from the textile industry by synthetic dyes, cochineal reds – also known as carmine – found a new and more profitable place in the cosmetics and food coloring industries. Today carmine is a high-priced specialty dye that puts the red in red pistachio nuts, maraschino cherries and Italian aperitifs. Its advantage over man-made red dyes is that it is not toxic or carcinogenic.

That means that making a rug with cochineal dyes today would cost a fortune. The giant cactus farms in Mexico may still exist and the dyes may still be exported, but carpets with insect reds belong to the past.

A Perfect Red: Empire, Espionage, and the Quest for the Color of Desire, by Amy Butler Greenfield.

Javid Tafazoli: Photographs
Posted by Tea and Carpets at 22:50

I really appreciate your professional approach. I would like to thank you for the efforts you made in writing this post. I am hoping the same best work from you in the future as well.

Thank you very helpful article. allow me to join to share health articles with your article hopefully useful.