In Harry Potter's World, The Carpet Is A Harshang Bidjar

LONDON, September 12, 2008 -- Is a Bidjar Harshang-patterned carpet quietly becoming the most popular rug of the next generation?

It’s possible – if you think that being visibly featured in Harry Potter films is likely to impact future rug buyers’ tastes. That is, ‘future’ in the sense of today’s children growing up to be tomorrow’s rug lovers.

But before going further, it may be necessary to explain a little about Harry Potter’s world.

Harry, the boy magician, goes to Hogwarts, a school of magic. The school is modeled very much on the great British universities such as Oxford, so Harry lives in a 'House,' or dormitory, with a common room where the resident students can gather informally anytime of day.

Harry’s ‘House’ is 'Gryffindor' and the floor of the Gryffindor common room is covered by a giant Bidjar with a Harshang pattern on a brilliant blue background. 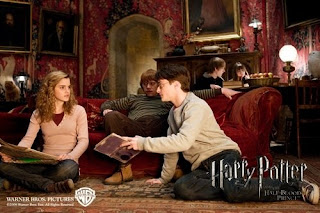 Here, Harry (right) and his two close-friends Ron (center) and Hermione (left) meet in the common room in a scene from one of the seven Harry Potter films.

The carpet shows up in most film scenes of the Gryffindor common room and, along with tapestries on the walls, gives the room a very magical, wizard-like feel. The non-figurative Harshang design, which conjures up zodiac-like images of crabs and bursting suns, is perfect for the role. (It also goes well with the wallpaper, which reproduces 'The Lady and The Unicorn' tapestries from the Cluny Museum of Medieval Art in Paris.)

Is it entirely an accident that a Bidjar Harshang almost identical to the one shown below was chosen by the set designers? 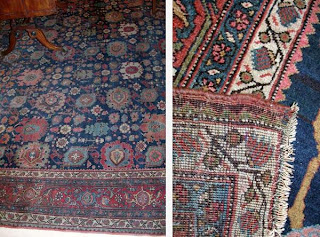 Maybe not. More than a few Europeans and Americans who are now deep into adulthood have memories of oriental carpets in university rooms. And a generation earlier, rugs were far common.

Bidjars are the natural choice for such high-wear settings. Produced in and around the northwestern Iran town of the same name, they are the most strongly made and indestructible carpets of all.

Their nickname, after all, is the 'Iron Rugs' of Persia. They are so densely woven and stiff that they cannot even be folded for transportation. Instead, they have to be rolled up.

Below is a photo of the library room in Eliot House at Harvard University. On the floor – again -- a Bidjar Harshang. Only this time the carpet has a red background. 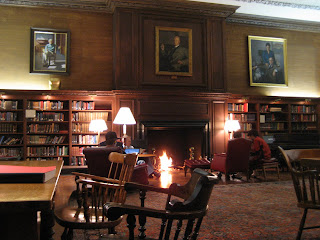 Seeing an oriental carpet in a university common room may not just be nostalgic for lots of adults who watch Harry Potter with their children.

It also is a reminder of the huge export industry which once thrived in northwestern Iran producing room-sized rugs of all types for wealthy Western institutions and homes.

The peak was at the turn-of-the-last-century, when an oriental rug on the floor was the symbol of both a wide view of the world and of a certain standing.

The story of this export industry is well illustrated by the success of Ziegler & Company. The Anglo-British firm based in Manchester, England, was among the first to realize that the West’s ‘Gilded Age’ needed giant rugs that complemented Western room decors of the time.

Arto Keshishian, writing in the magazine Antiques and Fine Arts, gives the background in his article ‘Ziegler and Their Carpets.’ He notes that by the 1850’s Europe’s cyclical interest in the orient was on the upswing again and department stores began stocking up on the existing village and workshop carpets available in Iran.

But, he writes, "unfortunately, the carpets were generally either too long or too narrow for the rooms of the new English homes, because the imported carpets were designed in a traditional format to fit urban, Persian rooms."

The Ziegler Company saw an opportunity. At the time, it was selling printed cottons produced by the Manchester mills to customers in Iran and Turkey. But it changed direction, set up its own looms in northwestern Iran around the town of Sultanabad (now Arak) and began supplying hand-woven carpets to the British market instead.

At the same time, “fewer color combinations were used, resulting in a simpler balance and harmony; the color green was liberally incorporated, perhaps to echo the English fondness for the countryside.” 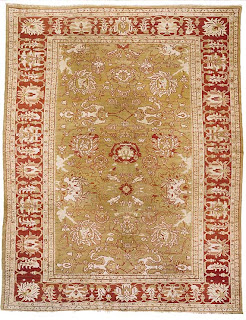 Ziegler did not produce Bidjars and its designs, as shown here, look nothing like the carpet spread across Harry Potter’s floor.

But the principles Ziegler exemplified offer some time-tested guidelines as to how carpet producers respond to changes in the market and supply what each new generation wants.

Will the next generation surprise its parents by switching back from the abstract, tribal carpet designs popular today to the lush feel of turn-of-the-last century Bidjars and Zieglers? Only the next generation can answer and, at the moment, its members are still window-shopping – or should we say movie-shopping – the options.

'Ziegler and Their Carpets' by Arto Keshishian
Posted by Tea and Carpets at 22:41