WASHINGTON, D.C., March 28, 2008 – Washington is a city of embassies, big and little, and at first glance the Textile Museum can easily be taken for one.

The museum is in a small neo-classical mansion from the turn of the last century and stands on a shady downtown street near the legations of Ireland and Myanmar. Just as they do, the building has a flagpole out front and the air of discreet charm that diplomats so prize. 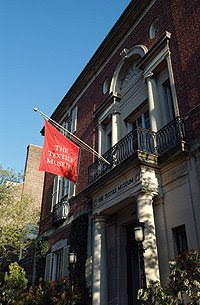 But once inside, it is clear that if the Textile Museum is an embassy it represents the entire planet. On display any given month may be classical Persian carpet fragments, or textiles from the highlands of Bolivia, or even a collection of fabrics with nothing in common except that they were all dyed indigo blue in different parts of the world. And that is not to mention periodic exhibits ranging from Central Asian tentbands to fabrics in all shades of red.

Just how devoted to textiles is this place? Even the tiled, Georgian-era washroom on the ground floor offers a surprise. Stenciled in graceful letters around the circumference of the room are the words MORDANT, LOOM, BATIK, PILE, IKAT, and more.

The museum does have a serious side: it is an international center for scholars and collectors with an inventory of some 15,000 textiles and rugs from both the eastern and western hemispheres. It was the first textile-conservation laboratory in the United States and, since 1962 has published the now temporarily suspended research revue ‘The Textile Museum Journal.’

But the museum also very much reflects the personality of its founder and the personal joy he took in discovering, and celebrating, mankind’s fascination with weaving. 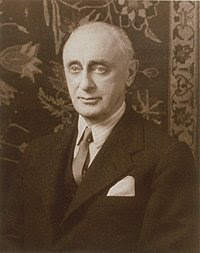 The founder is George Hewitt Myers, who was born in 1875. He came of age when the West’s fascination with oriental carpets was at its peak, with demand so great that production soared in Turkey, Iran, and the Caucasus. Like many young gentlemen at the time, he bought his first rugs when he went to university -- in his case, an 18th or 19th century Ghiordes prayer rug to help furnish his rooms at Yale. Later, he found the rug was a fraud. But instead of extinguishing his interest in carpets, the forgery only stimulated it.

Myers learned his first lesson in carpets this way: “The first sight of a (genuine) tattered old Ghiordes threw the spotlight of authenticity upon two of three of my earliest purchases,” he said. He discovered his own much more recently made prayer rug had acquired its antique look through “an effective application of pumice stone and elbow grease." 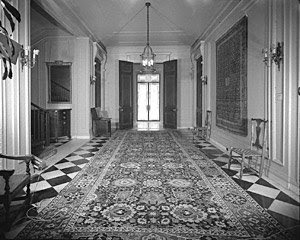 Myers was heir to a sizable share of the Bristol-Myers Pharmaceutical firm, a graduate in forestry management, and a talented businessman. But he decided to make a lifetime achievement out of collecting fabrics. After he moved to Washington, he filled his home with them and involved his guests and scholars in debates over the textiles' origins. His interests soon sent him spinning back through time in search of earlier and earlier pieces.

“When I first bought a few rugs in the 1890s, I had no thought of buying several hundred," he said. "When I first bought textiles in 1910, I had even less thought of buying several thousand. But one thing led to another and the underlying thought, if any, was to find out what went before a certain piece to make it as it was. This of course led back to earlier and earlier forms, somewhat logically.”

By 1925, the year Myers turned 50, conversations with guests were no longer enough. He opened part of his mansion as the Textile Museum. And despite his own active business life, he promoted the museum's steady growth. He spent generously, including paying $18,000 in 1928 to purchase a Lotto carpet fragment even though he already had a palace-sized Lotto in his collection. He recognized that the fragment preserved a better quality of drawing than did the full carpet.

When Myers died at age 82 in 1957, he left his Textile Museum with one fourth of his fortune and his belief that to study textiles is to learn about the world. Today, the institution is considered to be the foremost museum in the western hemisphere devoted to the preservation, study and exhibition of handmade textiles. Its popularity has grown enough that the museum plans to expand next year into an additional display space near the Washington Mall, where most of the capital’s museums are located.

But if the museum is enlarging, its spirit remains the same. That can be seen most Saturdays, when crowds gather for a weekly “Rug and Textile Appreciation Morning.”

The number of enthusiasts varies from 30 to 40 and discussion topics are as wide-ranging as South Persian bagfaces, Turkmen main carpets and camel trappings, and American quilts. In homage to Myers, the groups meet in the same walnut-paneled drawing room where he and his wife Louise once entertained their friends with discussions of the same subjects.

(Sources for this article include "One Man's Romance with Fiber Created the Textile Museum" by Martha McWilliam in 'Smithsonian Magazine,' and "Legacy of George Hewitt Myers" by Carol Bier in 'Arts of Asia.' Photos courtesy of Textile Museum.)


A Rug & Textle Appreciation Morning at the Textile Museum

Article: Myers as a Collector
Posted by Tea and Carpets at 13:06

This is a fantastic exploratory post on the textile museum in Washington. Thank you for sharing, rugs are such a fundamental fabric of who we are as humans!

Asian Games City project future development of housing prices at least 10,000 yuan / square meters above fake gucci belt the current price of the surrounding, replica gucci belt but about 8,000 yuan. It should be noted that the Guangzhou Asian Games City, the new king of the most horrifying is not its total price of 25.5 billion,

Hi,
Awesome blog!
In fact your blog is a must visit!
Thank you so much for sharing this blog.
buy carpets in dubai
carpet suppliers in dubai

Such an informative post about the Washington’s Textile Museum Explores A Planet of Weavers.Get the Antique carpets rugs online.

Hi
Good job and great efforts.
Thank you so much for sharing this blog.
sisal rug for cats