So, it is interesting to see how advertisers approached the problem in the days when mass marketing was new.

The story is told by the posters that still survive from the turn-of-the-last century. Some of these posters were so successful and popular that they have become collectors items themselves, just like the rugs they show. 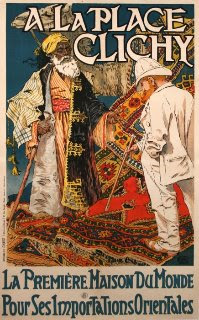 Here is an 1891 poster for a Paris store, ‘A La Place Clichy,’ that specialized in textiles, ready-to-wear clothing, and sundries. The ad proclaims the store ‘number one in the world for its oriental imports.’

What gives the poster its appeal?

For one, it sets a mood with stock characters that are instantly recognizable. The desert Arab, the pith-helmeted Westerner, and the treasure-laden camel make the idea of buying a rug adventuresome and appealing.

And, strangely, it doesn’t seem to matter that some of the rugs most prominently shown on the poster are from a world that has nothing to do with any of these stock characters at all. They are from the pine-covered mountains of the Caucasus in the then Russian Empire.

The painting is by Eugene Grasset, a Swiss decorative artist. After studying drawing and architecture, he traveled to Egypt in 1866 and fell in love with its motifs. He used Egyptian elements in a number of his posters for commercial products, perhaps explaining why the backdrop for his carpet advertisement seems to be missing only the pyramids.

A second reason the poster may be appealing is that Grasset was one of the leading graphic designers of his day and clearly knew what his audiences liked. His best known creations is the "Semeuse" logo which is still used by the dictionary publisher, Éditions Larousse today. 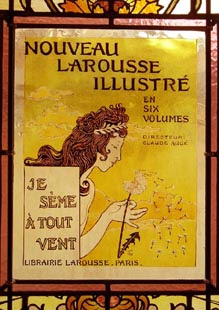 Grasset was equally famous as an innovative designer of furniture fabrics and tapestries as well as ceramics and jewelry. Some of his creations are considered milestone Art Nouveau patterns and motifs.

The fact that a talent like this could be recruited for marketing rugs gives some idea of the profitability of the rug business at the time.

And it shows that Art sells Art – something that rug advertisers who rely upon simply putting their logos in newspapers seem to forget.

An original copy of the ‘A La Place Clichy’ poster sells today on the internet for 2,500 euros from the Paris-store Estampe Moderne & Sportive. 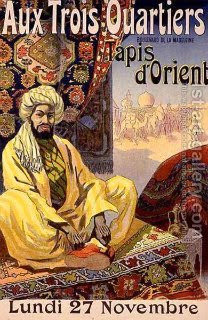 Here is another advertisement for a rug sale in Paris in 1899. The venue – ‘Trois Quartiers’ – was a shopping gallery named for its location at the junction of the Madeleine, Opéra, and Concorde neighborhoods. It still exists today but now it is filled with luxury fashion boutiques.

This time the painting is by artist René Péan but many elements are like Grasset’s. The central figure is again the highly recognizable Arab trader despite the fact that, here too, the rugs are from the Caucasus.

The carpet behind the vendor is drawn so clearly that Caucasian rug expert Ralph Kaffel identifies it as an eastern Caucasus Boteh rug.

But why are images of the Middle East being used to sell Caucasian carpets?

One reason may be that Caucasian carpets were relatively new on the Paris market at the time and so had to be linked to more familiar images.

Kaffel observes in his 1998 book ‘Caucasian Prayer Rugs,’ that by the third quarter of the 19th century carpets from the Caucasus were becoming known in the West but were still novelties.

They were such novelties, in fact, that they provided the subject of one of the first ‘carpet books’ in English. The author, Herbert Coxon, traveled to the Caucasus to buy some rugs on site and wrote about his experiences in ‘Oriental Carpets, How They Are Made and Conveyed to Europe,’ published in 1884.

It is interesting to note that the posters for both the Paris department stores seem to be deliberately “positioning” Caucasian rugs as part of the fad for Orientalism that swept Europe in the late 1800s and into the early 1900s.

Tying into the fad meant the sellers could benefit from the free publicity generated by Orientalist fine arts painters. At the same time, buyers could get extra cachet for their purchases. 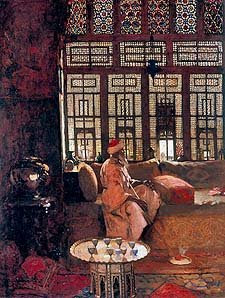 Here is an example of an Orientalist painting by Arthur Melville in 1881 entitled ‘An Arab Interior.’ On the floor, a carpet helps set the stage.

Like Orientalism, the rug store posters of the turn-of-the-last century belong today to a world long gone by. But they still stand as some of the most successful carpet ads of all times.

How can one be sure? The measure of success is longevity. Other ads have come and gone but the ‘Trois Quatiers’ poster, like the ‘A La Place Clichy’ poster, still circulates among museums and collectors.

And if you can’t find your own original of the ‘Trois Quartiers’ poster, there are replica art companies that regularly reproduce it . It is offered on the internet for $227 to $745, depending upon size, by 1st-art-gallery.com.

I adore oriental rugs and carpets, thank you for this useful site!


This information is very useful. thank you for sharing. and I will also share information about health through the website

Thanks for the blog. Here we can find the wide verities of Persian carpet