Konya, The Seljuks, And The First Great Anatolian Carpets 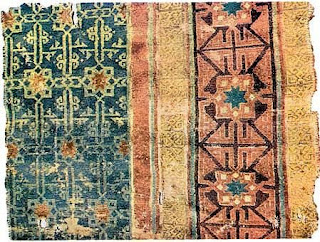 KONYA, Turkey; June 10, 2009 -- Imagine you had a time machine and could visit one of the great carpet production centers of the Silk Road.

Where would you go?

The great Venetian traveler of the Silk Road describes the area around Konya this way on his journey from Anatolia to Persia between 1271 and 1272:

“The best and handsomest carpets in the world are wrought here.”

At the time, Konya was a major city of the Seljuk Empire. It was at the heart of the first great Turkic empires created by nomadic peoples sweeping into Iran and Anatolia from Central Asia and beyond at the start of the last millennium.

Turkic, as well as Mongol, empires dominated a huge swath of Eurasia from the 11th century through the 16th century and created a cultural melting pot that extended from Turkey to China.

And it was out of that melting pot, fueled by a constant exchange of commodities and ideas along the Silk Roads, that most of what we know today as oriental carpets emerged.

The nomads who followed their armies and settled down in the conquered areas brought their own rich tribal weaving styles into them. Over time, these fused with local artistic traditions to create a huge variety of new patterns in the continual process of design innovation and change that has always characterized the woven arts. 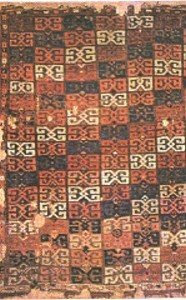 It is in Konya where travelers first record this fusion producing a major commercial, and international, carpet export industry. One is Ibn Battuta, Moroccan lawyer who spent 29 years traveling most of the Islamic world in the 14th century.

Visiting Konya in the 1330s, about 60 years after Marco Polo and just after the end of the Seljuk era, Ibn Battuta mentions that the carpets made there were exported to all the Turkic-ruled regions of the day. That included Egypt, Syria, Iraq, Persia, and parts of India and China.

The extent of the carpet industry’s reach should be no surprise. Ibn Battuta’s lengthy “Rihla” or “Book of Travels” describes a pre-modern but already globalized world. 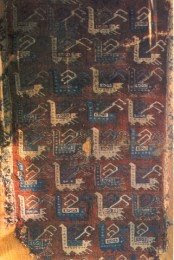 As author Ross E. Dunn observes in his book ‘The Adventures of Ibn Battuta,’ the Moroccan traveler’s “tale reveals that by the 14th century the formation of dense networks of communication and exchange had linked in one way or another nearly everyone in the (Eastern) hemisphere with nearly everyone else.”

As just one example of the importance the rulers of the different parts of the vast Islamic world gave to trade, the Seljuks were famous builders of caravanserais, or “Hans.”

The ruins of many still stand in Anatolia today, marking the Silk Road trading routes that crisscrossed the empire and made it rich. This one is the Sultan Han at Aksaray, not far from Konya. 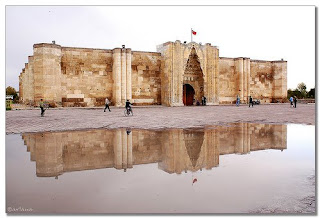 In the state-funded Hans, the vast caravans – some with enough camels to carry the equivalent of a cargo ship of their time – found water, food, and a secure place to stop for the night at regular intervals along the way.

Unfortunately, Ibn Battuta does not say whether Konya carpets were exported to Europe, leaving that a mystery. But it seems likely they were because Europe was in close trading contact with both the Seljuk Empire and the rest of the Islamic world.

After all, the Seljuk Empire was hardly terra incognita. Much of it was carved out of the Byzantine Empire as the Seljuks expanded westward from their first great conquest, Persia.

Once the Seljuk cavalrymen defeated the Byzantine army at Manzikert in 1071, the commanders settled down in Konya and other ancient Greek and Armenian towns.

But, as Dunn points out, nomadic Turkoman clans continued to drift over the Anatolian plateau, whose majority and heavily Hellenized and Christian population was still neither Muslim nor Turkish or Turkish-speaking.

As Marco Polo described it:

“The inhabitants of Turkomani may be distinguished into three classes. The Turkomans who … dwell amongst the mountains and in places difficult of access, where their object it to find good pasture for their cattle, as they live entirely upon animal food .. The other classes are the Armenians and Greeks, who reside in cities and in fortified places and gain their living by commerce and manufacture.” 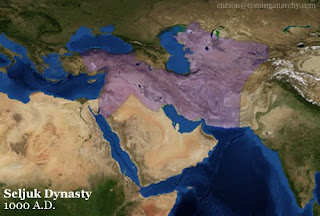 Here is a map of the Seljuk Empire circa 1000. Indeed, the Seljuks called the lands of their Anatolian sultanate 'Rum' because it had been established on territory long considered "Roman", i.e. Byzantine, by Muslim armies. Rum was the Arabic word for Rome.

The Seljuk rulers had formal trading agreements with Genoa and Venice (see: Venice: Discovering Europe’s Silk Road City And The Early Carpet Trade), two of the European shipping powers that dominated the Eastern Mediterranean at the time.

The Italian ships regularly called at ports in southern Anatolia as well as in the Black Sea, presumably to pick up goods flowing Iran and Central Asia along the Anatolian trunk road linking Konya, Erzurum, and Tabriz.

But if Seljuk carpets reached Europe, there is no record of them in European painting of the time. By the time early Renaissance artists begin depicting carpets, the Seljuk Empire – which ended around 1300 – had fatally weakened by the next great wave of nomads to sweep over Eurasia, the Mongols.

Indeed, until very recently, there was no evidence at all – apart from the carpets’ very limited appearance in Seljuk miniature paintings (as in The Makamat Manuscript) – of what Marco Polo’s “best and handsomest carpets in the world” might have looked like.

The story of how some enterprising carpet lovers finally found a few surviving Seljuk pieces is one of the great surprises of the rug world. 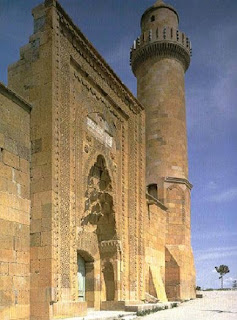 In 1905, the German Consul General and others in Konya, was intrigued by Turkish custom of contributing rugs to mosques and noticed that in the oldest mosque in Konya – the Aleddin (Ala al-Din) mosque – the overlays of carpets had built up over time almost like geological strata.

In an amateur archaeologist’s dream, the consul persuaded the city government to allow an “excavation” to see if the oldest carpets might be from the Seljuk era, when the ancient mosque was greatly expanded in 1220.

To everyone’s amazement, carpets with designs never seen before were indeed discovered in one dark corner beneath all the others: three complete ones and five fragments. The vizier of Konya commissioned watercolors of the rugs, these were published in Europe by rug researcher F.R. Martin 1907-8, causing great excitement.

The rugs are now in the Museum of Turkish and Islamic Art in Istanbul and the Ethnographic Museum of Konya and are generally considered to have been woven late in the1200s or early in the 1300s. 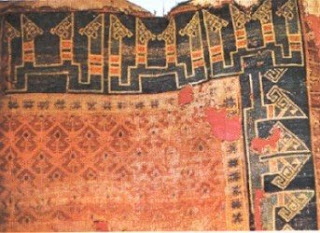 But these are not the only Seljuk style rugs to be found.

In 1930, American Professor, R.M. Riefstahl “excavated” three more rugs in the Eşrefoğlu Mosque, a Seljuk-era mosque from 1296, in the city of Beyşehir, about 100 km east of Konya.

Those rugs are now in the Mevlana Museum of Konya, which celebrates the life of the Seljuk Empire’s best known citizen, Mevlana Jalaleddin Rumi (1207 -1273), the Sufi mystic whose followers founded of the Whirling Dervish order. His inspirational humanist and religious poems, which he wrote in Persian, are among the most popular works of poetry worldwide today.

And then finally in 1935 and 1936, the Swedish art historian Carl J. Lamm discovered seven more Seljuk carpets among a score of Anatolian fragments unearthed during excavations of Fustat, the first capital of Egypt under Arab rule.

Fustat was burned down in 1168 by its own vizier to keep it out of the hands of the invading Crusaders. After that, the area was incorporated into nearby Cairo but eventually fell into disrepair and for hundreds of years served as a garbage dump.

The fragments from Fustat, which are now kept in several European museums, suggest that the Seljuk carpets were indeed exported widely.

And thanks to all these miracle recoveries of Seljuk rugs early last century, we know that they were produced in two main styles. They could have overall repeating geometric patterns or repeating animal patterns.

The geometric patterns are complex and some of them have a surprisingly close resemblance to the patterns in Seljuk stonework, suggesting the rugs were part of an overall design movement not unlike design trends in many other periods, including our own.

Here is a geometric, recessed-brick pattern on the tower of a Seljuk-era mosque in Damghan, Iran.

But all the Seljuk carpets are unique in another way, and that is their use of color. They have a distinctive way of using two shades of the same color one upon the other to give their design a subtle, soft appearance.

This “ton sur ton” palette -- in various tones of red, brown, ochre, green and blue -- does not appear in later Turkish rugs. And it still makes Seljuk carpets sparkle today.

The peculiar designs of the Seljuks would later morph into very the different styles of the Ottomans, the next great empire to rise in Anatolia.

And this time Anatolian rugs would be so heavily exported to Europe that “Ottomans” would appear hundreds of times in the paintings of the Renaissance.

But it would be humble animal patterns of the Ottomans, and not their more complicated geometric cousins, that would become the first recorded oriental carpets in the West -- 100 years after the Seljuk Empire's demise. (see: Were Animal Design Carpets Europe’s First Favorite Oriental Rugs?).

The Seljuk Han in Anatolia

Wikipedia – Seljuk Sultanate of Rum
Posted by Tea and Carpets at 08:15

I wrote a blog about your blog. here is the link.