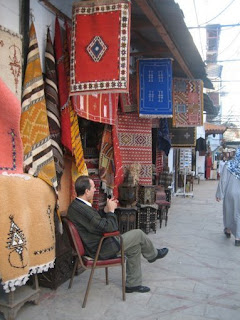 RABAT, May 23, 2008 -- When people think of oriental carpets, Morocco is not the first place that comes to mind.

But the Berbers, whose nomadic ancestors settled this land around 2000 BC, have an ancient tradition of tribal weaving that is both similar to and distinct from other Middle Eastern rugs and carpets.


The Berbers still make up some 40 percent of Morocco's population -- the rest are Arabs and Moors -- and their stronghold is the Middle Atlas mountains. The peaks rise up as a tall, temperate barrier between coastal Morocco and the vast Sahara desert. On the slopes, which are often better suited to grazing sheep than to farming, about a fifth of the tribes still weave pile carpets and flatweaves in styles that bear their names.

The rugs tend to be large, long, and loosely woven with bright, earthy colors including lots of oranges, yellows, and browns. They have simple geometric designs. But their simplicity is deceiving. 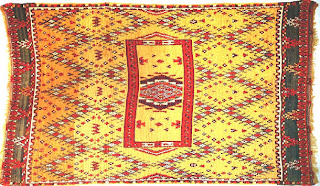 The motifs, often based on diamond shapes, change size and sometimes orientation. And the symmetry is deliberately never perfect.

The result is something that not only looks sui-generis. Often, it feels that way, too. That is because many of the Atlas pile weavings are unusually soft and flexible. They call to mind blankets a much as they do carpets – a light quality which makes them practical for mountain life.

Ancient Berber beliefs, which survive alongside Islam, also find their way into the rugs. Some tribes will burn the frings of their carpets to make them less attractive to the demon of envy. It is part of their belief the duality of life and their desire to invoke positive power, or Baraka, to ward off evil.

Baraka is thought to exist to some degree in all things and artists try to transfer it to their creations through a whole vocabulary of symbols and techniques to protect themselves, their work, and the consumer. 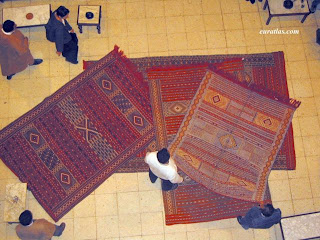 The best place to buy the tribal pieces is from the tribes themselves. But as Western interest in weavings from the Atlas Mountains has grown since the 1970s – and the renewal of curiosity about tribal art worldwide – the rugs also have become a staple of the shops in Rabat, Marrakesh, and Fez.

In these cities at the foot of the mountains, some workshops have even begun producing Berber-type designs. The workshop products tend to be heavier and hold to the floor better than the tribal pieces as they aim directly for the Western interior design market.

Interestingly, Morocco has a long-standing workshop tradition – but not for Berber carpets. Instead, the tradition is for Turkish designs and it dates back to northern Morocco’s long period under the Ottoman Empire from the 16th to late 19th century. The style was loosely modeled on the famous Anatolians from Gordes and Ladik, among other Turkish weaving centers.

These ‘city rugs’ from Rabat and Casablanca do not enjoy much critical acclaim. They are often described as coarsely woven imitations in bold colors that are not likely to please fans of the Turkish originals. But some of the designs offer unusual local twists and they are a historical curiosity.

Older pieces are likely to include cochineal reds from the days when, beginning in the late 18th century, Morocco was one of the main centers outside of Central America for farm-raising insects for dye. Now, such rugs are one-of-a-kind because chemical dyes have long since replaced insect dyes and other natural dyes in all Moroccan weaving.

These days, Moroccan city carpets are moving from Turkish designs to Persian-like medallion patterns in a new bid to compete in the world market.

But the strength of the country’s weaving remains, as ever, in its Berber traditions. If the Berber weavers return to natural colors, just as village and tribal weavers are now doing in many other parts of the world, Morocco’s tribal pieces could well gain the greater notice they deserve.

Euratlas: Pictures of Morocco
Posted by Tea and Carpets at 07:53

I would love to link to this blog aobut Moroccan rugs on my blog. I am writng one to show the difference between chinese, British India, and moroccan area rugs. Thank you

For a few hours I have been reading and looking for Morocco's Berber Tribal Rugs Offer A Different View Of Oriental Carpets and is amazing and disturbing how many blogs related to generic viagra are in the web. But anyways, thanks for sharing your inputs, they are really helpful.
Have a nice day

things to see and do in Marrakech said...

Interesting post, i was recently watching this on BBC. Carpet design is a very creative area and an age old business

Really nice rugs, without a doubt. There is also very nice rugs in Abu Dhabi, if you're interested in.

I was there enjoying these Dhow cruise Abu Dhabi that I really would like to recommend you.

Im selling the Moroccan Berber rugs if any one is interested. Check out my Hub:
http://hubpages.com/hub/Moroccan-Berber-rugs

they have a collection of Modern Rugs with an array of modern designs. Each has its own great look that will find a way to enhance your home.

Moroccan rugs are really nice! I once visited this beautiful place with the occasion of Natasha Atlas world tour, so I took advantage of the trip and got to buy some nice souvenirs, including nice pieces like these ones here on the pictures. the only bad thing about the country was the -almost- impossibility of getting Generic Viagra on the drugstores!

I have to say that this type of carpet do last for long time. A friend of mine from Milano has got one and he loves it.
If you happen to come to milan, please have a look to my website as well!
http://www.hoteleconomici-oneclick.it/hotel-economici-milano

Yes i agree that moroccan rug style is unique . i especially mean THE TRIBAL RUGS: Their style reflects their surroundings, mimicking the heat and colors of the desert.
Apart from the culture, another thing that sets Morocco tribal rugs apart is the style. The rugs have a specific flavor to them. Most of the rugs are of desert themed colors. They often have red, yellow, brown, orange or white. There's also something special in the patterns of the rugs. The patterns often depict geometric designs such as diamonds and argyle.

if you are interested in knowing more , check this link:

I wonder if at least one of these carpets fly or stuff!

Moroccan carpets are quickly gaining ground in the US market. Thank you for this entry!

As a rule, the Morocco's rugs are large in size, long, with bright, earthy colors including lots of oranges, yellows, and browns. I like this style as it similar to other Middle Eastern rugs and carpets! Utilize our writing service when you need to write an article or anything else!

Great Work. Your writing is one of a kind. The approach is very interesting to read and gives more clarity. Waiting for your future posts. tik tok video

Thank you, the article is very petrifying

This is a really informative knowledge, Thanks for posting this informative Information. Berber rugs for sale