PRAGUE, March 14, 2008 – The Czech Republic’s economic rebound has brought more than the restoration of historic buildings whose beauty was long hidden under sooty and cracking plaster.

It also has seen an upsurge of interest in the country’s many art treasures, including – for oriental carpet lovers – the valuable rugs held in state and private collections.

One of these treasures can be seen in the most recent edition (Winter 2007) of ‘Hali,’ the leading international magazine covering the world of carpets, textiles and Islamic art. The carpet, an Ottoman from the second half of the 16th century, is the oldest one in the Czech Republic and its magazine debut marks the first time it can widely be seen in color.

The historic carpet hangs in a castle in the south of the country that is associated with the wealthy Schwarzenberg family. It was woven in the Turkish city of Oushak, famous in Ottoman times for its fine rugs.

The Schwarzenberg piece is one of the renown “white oushaks,” which were named for their white background and were much prized in renaissance Europe. This one is decorated with mysterious symbols known as “chintamani” that appear as triangles of dots above two wavy lines. The Turkic symbols are believed to harken back to Buddhist times in Central Asia.

The appearance of the carpet in ‘Hali’ is the latest sign of a revival of interest both outside and inside the Czech Republic in the country’s rug collections. 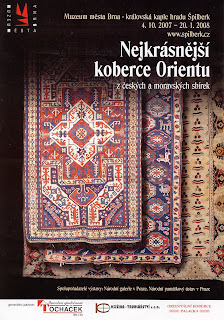 The same carpet, which rarely leaves Hluboka Castle, also recently appeared in a major domestic exhibition of pieces held by Czech museums and private collectors. The exhibit in Brno this winter followed similar showings in Prague and Plzen that have drawn sizeable crowds over the past few years.

The visitors to the exhibits are curious to rediscover oriental carpets after they have been an almost forgotten item in Czech households for many decades. How they became so forgotten is a curious tale from the communist era, when many traditional status symbols were turned upside down.

Miroslav Jungr tells the story in his 2005 book “Oriental Carpets,” itself the first Czech-language collectors’ handbook to be published since before World War II. Born in 1942, he writes from personal experience.

Jungr notes that until World War II, oriental carpets were a standard part of any successful family’s décor in a society that maintained the values of turn-of-the-century Europe.

“My grandmother, who had four daughters, bought oriental carpets as part of the dowries that they would take into their marriages,” he recalls. The carpets came from a selection of high-quality carpet shops in Prague which at the time did good business.

But with the communist coup in 1948, oriental carpets were branded capitalist luxuries. The retail shops disappeared and were replaced by something unique to the communist era: state-owned antiquity shops.

The “Antikva” shops were always full of rugs, porcelain, and other collectibles. The stock came from formerly successful families which had to sell their valuables to pay a “millionaire’s tax” that was passed just before the communists seized power and nationalized most private property. With no businesses or other such holdings to liquidate to pay the tax, there was nothing for these families to do but liquidate their personal possessions at the antique shops.

In effect the antique stores were pawn shops and their purpose was to earn hard currency for the party. Their staffs were usually the wives of party officials and they sold only to foreign diplomats and touring groups.

The effect on Eastern Europe’s heirlooms was like that of a vacuum cleaner moving them West at absurdly low prices. Jungr says the shop staffs often had only the crudest ideas of the collectibles’ value and priced them to sell quickly.

As oriental carpets were devalued in communist Czechoslovakia, they were replaced as status symbols by what was truly hard to get: modern Western-grade home furnishings.

Most in demand was plain wall-to-wall carpeting. Such carpeting was produced domestically by the long-famous commercial carpet factories in northern Bohemia. But the product was almost entirely destined for export.

Jungr says that people, including himself, would go to any lengths to find a friend-of-a-friend who had some contact with the factories or with the rare state shop stocking their goods. A bribe was absolutely necessary to bring home the prize.

In his apartment in Prague, Jungr still has one room covered in white wall-to-wall from that era. It represents a trophy hard to give up even now. The choice for those who didn’t go to such lengths was shabby wall-to-wall carpeting produced for the socialist and third world markets in gaudy patterns.

Today, oriental carpets cost in Prague about what they cost anywhere else in Europe. A number of mid-range shops do consistent business but an early attempt at a higher-end collectors’ shop failed after several years due to lack of buyers.

That raises a question for Jungr and other rug enthusiasts in the country. Is the loss of habit for oriental carpets in home furnishings permanent, especially given today’s global trend toward minimalist decors?

Or, will the rediscovery of the lost family heirlooms – now so frequently on exhibit -- rekindle interest?

It is a question only time, and fashion, will answer.