Drawing Oriental Carpet Designs Is An Artform Of Its Own

BAKU and TEHRAN, April 18, 2008 -- Long before most town and city carpets are woven, the design is recorded on paper.

The drawing, or 'cartoon,' is what the weavers follow to create their patterns. And when the designs are complex, preparing the cartoons becomes an art form in itself.

Traditionally, cartoons have been drawn by hand on graph paper. Many producers maintain that system. Their designers use colored pencils or paint to create a portrait of part of the carpet that shows the border and as much of the field as needed to establish the pattern. 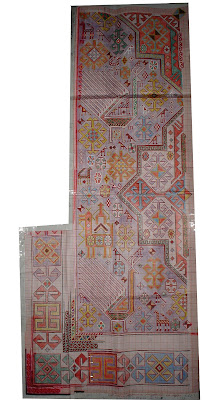 Vugar Dadashov, the head of Baku-based Azerbaijanrugs, uses this life-size design of one-quarter of a 1.5 x 2 meter Akstafa rug. It took a designer four days to draw and his weavers have been using the cartoon for three years.

Because this Akstafa design is symmetrical, the weavers can complete the remainder of the rug's pattern themselves – though they have to mentally flip and reverse the cartoon to do so. It is an exercise in abstract thinking for everyone involved, and one that dates back to the very earliest days of the settled carpet trade.

But when carpets are non-symmetrical, or contain surprise elements in some parts of the field but not others, the cartoons have to show more. Then designers may draw a half of the rug or even the full rug. And at that point, drawing a carpet can become as time-consuming as any other form of portrait art.

Hossein Attaran, of Carpet Heritage in Tehran, says it can take a month to hand-draw a full carpet with an all-over design. For that reason, he and many other producers have increasingly turned to digital design systems to speed the work. 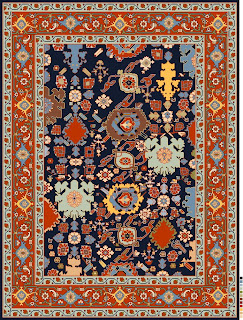 Attaran says that a designer can produce this digital image of the full-field pattern of an antique Bidjar in about a week. The image is later printed out on paper sheets that are sent to a village weaver near the town of Bidjar to hang on her home loom as she works part-time on the rug through the course of a year.

But even with software, designing remains a painstaking job and the designer still must make what traditionally are his or her own contributions to the drawing. That is, to give a personal interpretation to the motifs and choice of colors so as to infuse the work with life.

Where do the designers get the training to do this?

In many rug-producing countries, the education was once solely by apprenticeship but today it is increasingly formal.

Dadashov's designer is a professional painter who graduated from the Azerbaijan State University of Culture and Art. She works full-time for him and their inspirations come mostly from photos of rare antique Caucasian rugs.

Attaran says the programs include familiarity with the great carpets of the past but focus most of all on the production of the past 50 to 60 years. The students, who must be talented artists to enter, learn the styles of each of Iran's many carpet-producing regions so well that they can draw each one's characteristic 'guls,' or flowers, in their pure form.

That is partly so that the designers can preserve the identity of Persian carpets against ever increasing numbers of would-be imitators abroad.

"I have seen drawings of carpets outside of Iran and they have such a foreign accent, deliberate or not, that they have taken the original character out of the rug entirely," Attaran says. He employs two designers who have graduated from university programs precisely to keep his own production accent-free.

An Iranian designer can make the equivalent of $ 400 to $ 500 a month – a reasonable income in the local market - and has a status comparable to that of a graphic artist in the West. Increasingly, the designers are women, both because there are more women art graduates than men and because of economic reasons.

With Iran’s official inflation rate running around 20 percent, many women welcome a designer’s salary as a supplement to their family income. But many men who are the sole breadwinners for their families say they now must find professions that pay higher salaries than the carpet industry can offer.

Book: Oriental Carpet Design: A Guide to Traditional Motifs, Patterns and Symbols, by P.R.J. Ford
Posted by Tea and Carpets at 06:14

If you had some way of rating posts I would for sure give you a high rating my friend! Persian Rugs

I think most people would do the same when they are headed with the situation.
canada drugs

hi,
i just wanted to say how much i enjoy reading your blog. in a world full of spin, it's nice to get some fact-based analysis.
keep up the good work.
canada drugs

hi, I just wanted to say how much i enjoy reading your blog. in a world full of spin, it's nice to get some fact-based analysis. keep up the good work.

People appreciate those kinds of carpet designs. They are usually amazed by the story behind those patterns and other unique features. It's good to acknowledge their designers. Everything is changing and developing right now. The carpet industry's history should also be recognized somehow.

Regarding the first "drawing" "Akstafa" carpet eing produced in Azerbaijan - I actually felt like throwing up!

A blatant THEFT and PLAGIARISM of Armenian carpet designs! Azeris never had these kinds of carpets!

To top it off they claim Armenian carpets are actually Azeri... man what a shame and utter degradation of humanity then again what else can one expect from a Turkic culture.

Please keep up the amazing work and posts. We always thoroughly enjoy the read.

The game no one wants to play was won by New Zealand. They scored lots of tries, angry after being dumped out of the World Cup last week by England, and Wales did what they could with their patched-up XV but lost against them for the 31st consecutive Test.