Vintage Scandinavian Rugs And The Intimacy Of Modern Design

New York, September 22, 2012 – When one thinks of regions of the world with a long history of hand-woven rugs, Scandinavia may not be the first place that comes to mind.
But Scandinavian rugs not only have a centuries-old history, and some fascinating links to Oriental rugs, they also currently are much sought after by interior designers.
The renewed interest focuses particularly on vintage rugs woven in the 1920s through 1970s. That was a time when Scandinavian weavers attracted international recognition both for their pile rugs (called Rya) and flat-woven rugs (called Rollakan).
The Scandinavians did so by experimenting with abstract designs while continuing to weave with traditional methods – producing rugs that simultaneously offer the appeal of both the old and the new.
Above is a photo of a carpet designed by renowned Swedish weaver Marta Maas Fjatterstorm. Below is another by the same designer. Both are available from Nazmiyal Collection in New York.
We asked Jason Nazmiyal, whose New York-based Nazmiyal Collection specializes in antique rugs, why vintage Scandinavians are suddenly back in demand.
Interior decorators, he says, see the rugs as the perfect compliment to the wave of nostalgia that is now sweeping the design world for the styles of the 40s, 50s, 60s and 70s.
Those decades, whose style is increasingly referred to as "mid-century" modern, was characterized by maximum experimentation with Minimalism.
The result was bold and striking furnishings and decors, but not necessarily cozy and comfortable living environments.
The vintage Scandinavian rugs woven during those times offered a solution to the contradiction. They were modern in design but rich in texture and color.
"They draw a room together," Nazmiyal says. "They can transfer a sparse and minimal space to cozy and luxurious without changing the overall style."
He notes that one of the reasons the rugs have that power is that their creators were schooled in industrial design but, at the same time, were rebelling against too much industrialization. So, they created their own unique style that combined Modern and Art Deco with the warmer, more human influences of their own folk art and regional history.
The results can range from whimsical to dramatic, with no two rugs the same. And because all the rugs were woven not so long ago, the names of the weavers who created the best pieces are all known. That gives the rugs a still greater sense of personality.
Here is a Swedish Rollakan, available from NazmiyalCollection in New York.
Nazmiyal, who has personally traveled to Sweden to learn more about the rugs and acquire top pieces, can reel off some of the key names behind them.
Among the most famous are Elsa Gullberg, born in 1886 and one of the earliest Swedish textile designers connected to the modern design movement; Ethal Halvar Andersson, now a nonagenarian; Marta Maas Fjatterstrom, who got her start at a regional Arts and Crafts Fair and later attracted the patronage of Ludvig Noble, the brother of the founder of the Noble Prize; and that is just to name a few.
Many of the women went on to train others as apprentices and to found workshops, some of which continue today.
Below is a Finnish Rya with abstract circles and lines. It is available from Nazmiyal Collection in New York.
But if the renewed interest of interior decorators in the rugs of the 1920s to 1970s suggests that this period is all there is to know about Scandinavian rugs, that would be a mistake.
Behind the vintage rugs is a whole history of rug-making that goes back hundreds of and contains plenty of surprises.
No-one knows exactly when pile weaving began in Scandinavia but the earliest known examples were not rugs but sleeping blankets. They were woven to take the place of sleeping furs, which had been used since time immemorial but have the disadvantage of being hard to wash.
Interestingly, the earliest regional pile weavings date to around the same time Scandinavians would have become acquainted with rugs in the Orient. That was in the Middle Ages, when Vikings were routinely sailing down the Volga to Byzantium on trading expeditions.
One of the earliest surviving oriental rugs in Europe, in fact, was found in Sweden in 1925. It is the Marby rug, named after the abandoned provincial church where it was found cut into two pieces and long forgotten. 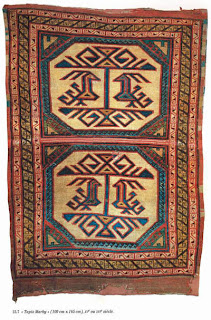 The Marby rug, shown here, is one of the so-called animal carpets from Anatolia which are depicted in Italian paintings of the 14th century. The animal carpets reached their peak of production and export to Europe in the early 15th century and then disappeared toward the end of the 15th century.
Nazmiyal believes that Scandinavians may have taken their inspiration for pile sleeping blankets from Anatolian "Yataks," which share the same characteristics and function. If so, it would be another unexpected link between East and West that underlines again how much is shred within the world's textile culture.
What is certain is that over time Scandinavians' use of shaggy rugs went from sleeping on the pile and decorating the back of the textile to flipping them over and using them as bedspreads with a decorative pile. Eventually, the bedspreads moved to the floor and became rugs.
Tracing all the design changes in Scandinavian pile and flat weaves is impossible to do here. But, in broad terms, things moved from originally simply working the owner's initials into striped geometric designs, to patterns with crosses to, around 1690, Baroque floral patterns.
Over the centuries, the use of highly decorative pile bedding rose to the heights of becoming a status symbol for the nobility in Sweden before losing that esteem in the 17th century and becoming popular as folk bedding instead.
By the time the Scandinavian rugs reached our ea, they had absorbed so many design influences, including from formal Western art, folk art, and imported oriental rugs, that they developed – and continue to develop – a rich vocabulary of their own.
It is that rich design vocabulary, their use of a broad color palette, and their ability to compliment a wide range of styles that brings vintage Scandinavian rugs back into our homes today.
#
RETURN TO HOME
#
Posted by Tea and Carpets at 23:28

How beautiful are those rugs. They are highly collectible today for their intricate craftsmanship, unique beauty, and investment value. An antique rug is both an asset and a work of art.

I am totally agree with your information i love it.
Thank you for post.

I love how these rugs went from a practical use as bedding to blankets to floor rugs.

wow beautiful rugs. i love them very much its look very traditional. thanks to share

One of the best designed I have ever seen and very nice collection and is very useful information where different variety of carpets and Rugs are available.

One of the best designed I have ever seen and very nice collection and is very useful information where different variety of underlay4uand Rugs are available.

This text may be value everyone’s attention. How will I learn more?http://brizzycarpetcleaning.com

Nice setup you got here! you should check this out! aussen matten

I love these rugs for there durability and there stylish look that holds up for years. Cleaning these rugs is a very good alternative to purchasing a new replacement. Check out our website http://www.lccfr.com for tips.

these are really awesome persian designs. we always have persian rugs in our living and dining rooms. i just love the craftmanship. great blog post by the way.

maintaining carpets can be tedious, costly and requires regular maintenance, as compare to Timber flooring Melbournee its only one time investment.

LAS VEGAS – It wasn’t Jessica Eye’s plan to leave her gym of 13 years before the biggest fight of her life.

The famed Strong Style Training Center in her adopted hometown of Cleveland, Ohio, long served as Eye’s home base. But after a disagreement on vision, she felt it was time to go her own way.

“I felt that we couldn’t agree to disagree on some of the ways that (I needed to be) trained for future fights,” she told reporters, including MMA Junkie, at the UFC Performance Institute on Friday. “So it was time for me to make a decision for myself.”

The recognition of natural health products has skyrocketed because those all herbal merchandise have tested to be secure and effective and are utilized by humans in all age brackets.

Tea and Carpet are having more blogs regarding carpet. I suggest people to visit you. Thanks
! Carpet Repairs Melbourne | Vinyl Flooring Melbourne

Wow awesome work! So glad you took the time to make this for us. Really appreciate it.
House Cleaning Newcastle

Lemieux will move up to the 168-pound division and face Max Bursak in a scheduled 10-round bout that will headline a card on Dec. 7 at the ...
Lemieux vs Bursak full video

These kinds of carpets are very meaningful since it gives us a taste of art from the previous periods, these are a must-have in our house. drywall thickness

Hi my mane is david, This post is really very good. Its a vary helpful for me. I have a website and this website is carpet related. If you need any help then please visit my webside. I can help you.

Beautiful ideas and the comments are very helpful. can someone help with carpet buying.
i have seen a lot here https://www.vintagecarpets.com/ and i think that this is the best i can get.