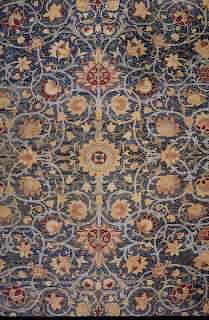 LONDON, October 24, 2008 -- Is all great art defined by its ability to connect with the soul of a culture?

And, if so, is the soul of Western civilization to be found in simpler times than today -- for example, in the Middle Ages?

We won't presume to debate such points here. But it is interesting to note that one of the more enduring design trends of the modern age was founded on just these principles.

That, of course, is the Arts and Crafts movement of 1870 to 1910. Its designers drew on Medieval art to launch their own style of furnishings ranging from wallpaper to chairs to textiles. Incorporating influences from eastern art -- equally known to the Middle Ages -- they also created their own carpet patterns.

Many of those designs, originally woven in England and Ireland, continue to be popular in the West today. They are faithfully reproduced every year by European carpet producers whose weavers are now in Turkey, India, Nepal, and China. 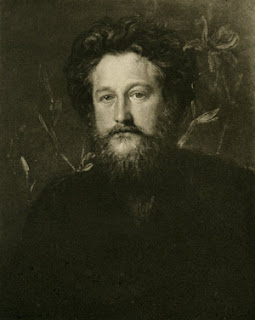 The founding father of the Arts and Crafts movement was William Morris (1834 to 1896), photographed here at age 37. An architect, artist, and poet, as well as a social reformer, he devoted his life to battling what he saw as the dehumanizing effects of the machine age.

His enemy was real. In the late 1800s, the industrial revolution had already swept away much of traditional life in the West, including artisanal culture. Hand looms were being overtaken by power looms and individual craftsmen who made furniture were being replaced by factories that assembled it from machine-made parts instead.

The products the new industrial processes were ugly –- much less finished than they are today – but highly affordable and omnipresent. 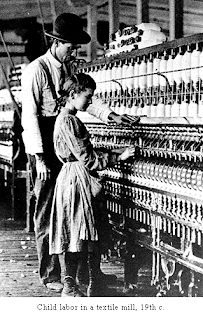 Morris organized a coterie of like-minded artists and friends from his time as a student at Oxford to try to hold back the tide. They described themselves as “Fine Art Workmen” ready to “undertake any species of decoration.” And they took the Medieval Guild system of independent artisans as their model for rescuing workers, including children, from being cogs in the new machines.

The Arts and Crafts movement, as it came to be called, was obviously at odds with its era in every way. It idealized a bygone time when the consumer age was just beginning and full of confidence. And it idealized simplicity and fair artisan wages when Victorian homes were full to bursting with new and ostentatious manufactured goods thanks to labor that was intoxicatingly cheap.

But, amazingly, the movement was commercially successful almost from the start. Delving into Medieval art and other handicraft traditions for inspiration, the Fine Arts workmen created a rich Gothic style that connected with modern Britons the same way their allies the Pre-Raphaelite painters did, or the much earlier ‘Ivanhoe’ (1819) of Sir Walter Scott did. The only difference was that the artisans produced everything that was needed for a total living environment. 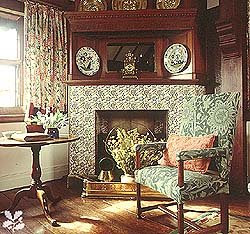 Here is the interior of Wightwick Manor, owned by a wealthy patron of the style. The effort to turn the home into a temple of art impossible to build from mass-produced items is fully visible.

All that is in line with Morris’s maxim: “Beauty, which is what is meant by art, using the word in its widest sense, is, I contend, no mere accident to human life, which people can take or leave as they choose, but a positive necessity of life.” 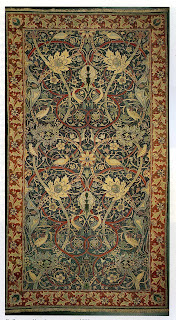 This carpet is entitled “Bullerswood” and was woven by Morris & Company, London, in 1889. Its design of scrolling arabesques and stylized flowers and birds is colored with a range of vegetable dyes. It is a prize of London’s Victoria and Albert Museum but its huge size – 4 meters by 7.5 meters – prevents it from being on permanent display.

The Arts and Crafts movement did not completely reject machines and did use some, including for weaving. But its insistence on the finest workmanship eventually priced the products out of all but the wealthiest households. So, the artisans never realized their utopian dream of turning every man’s home, even the most ordinary, into an earthly paradise.

But the movement did set the stage for later schools of design which more populary raised interior design to the level of a fine art. They include the American version of Arts and Crafts, which made much more extensive use of machines to lower the cost of craftsman-produced furnishings. They also include Art Nouveau and Art Deco. In all these styles, the handicrafts of Medieval Europe and borrowings from Islamic and Asian sources remained major inspirations.

Morris once acknowledged his debt to Oriental Art this way:

"To us pattern designers, Persia became a Holy Land, for there in the process of time our art was perfected, and from thence it spread to cover for a while the world, east and west."

Today, Morris remains the best-known face of the British Arts and Crafts movement but he is far from its only successful practitioner. Other leading designers are Gavin Morton and G. K. Robertson, who created this carpet woven in Donegal, Ireland, circa 1900: 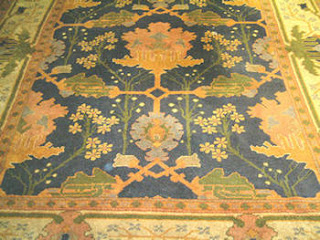 Original Arts and Crafts carpets now command high auction prices that put them beyond the reach of most collectors. But the patterns are so popular that many are readily available as reproductions. That includes this replica of a carpet designed by architect and painter Charles Voysey: 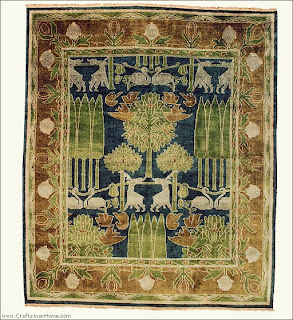 The design is "Duleek" -- named after one of the towns near Donegal, where the carpet was woven in the 1800s.

A quick look through the internet shows reproductions of designs like this one are available from $ 25 - $ 50 per square foot ($ 269 - $ 538 per square meter). Those low prices are not due to the use of machines, as the artisans of the Arts and Crafts movement might have feared. Instead, they are due to globalization and the outsourcing of Western hand weaving to the East, a future they never envisioned.

(Note: the picture at the top of this article is a detail of the central field of "Holland Park," a carpet designed by William Morris in 1883.)

On the Arts & Crafts Movement:

The Arts and Crafts Society

Poster: Donegal Rug by Morton and Robertson
Posted by Tea and Carpets at 00:58

Arts and crafts paints are an early emulsion formulation with greater breath ability giving a matt, softer finish with greater depth of color than modern emulsion. Carpets are made by commission and are hand-woven to the highest quality. To hand weave the carpets takes 16 weeks. This labor intensive process is spread over two continents and any arts and crafts carpet can be woven, to
any size and any color combination to suit your location.
-----------------
Bobwilliams
new way to advertise

Always so thorough! Thank you!

Expert mould removal brisbane carpeting cleansing Melbourne suggest not to utilize bleach if you intend to keep the good appearance of the carpeting without causing any type of damages to the colors or the fibers.

Horalain is an online fashion and beauty retailer offering branded products including modern Muslim arts and crafts, accessories, jewelry and beauty products. On our website, women of all ages find many of fashion items and styles.