In Afghanistan's Turkmen Rug Belt, It's Globalization vs. Tradition 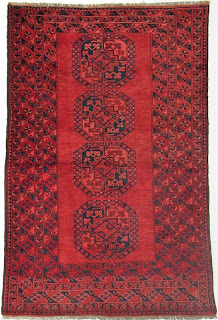 ANDKHOY, Afghanistan; August 1, 2008 -- Twice a week the men whose wives and daughters weave the traditional red rugs of Central Asia come to this town in northern Afghanistan to sell their work.

The carpet bazaar is a rectangular courtyard with a two-floor gallery of traders’ stalls on every side, and the men approach it with trepidation.

Many of the men have dropped in as onlookers on the previous market day to learn what they can about the going prices. Now, accompanied by friends for support, they file into the courtyard and squat around its perimeter with their bundled rugs.

When the traders walk by to inspect what they have, the bargaining begins. First, the carpet is spread face-down on the dusty ground. The uncut top is of no interest; it is only the back the trader wants to see. 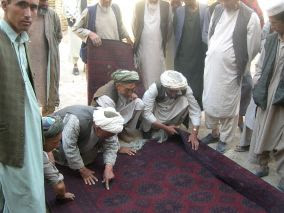 He inspects for knot density and evenness of weave. He folds the edges to see if they meet in the middle. And he looks for evenness of tension by carefully measuring the length and width at various points. And all the time he is checking for flaws.

Then he makes an offer: $75. The seller, who wants $120 won’t hear of it. Slowly the offer creeps up to $85 and onlookers begin to exhort the seller to agree. The trader tries to grab the seller’s hand and pump it to show there is a deal. A third person joins the negotiations, probably an agent of the trader, and pretends to be a fair-minded broker.

But still the seller refuses until, finally, the meeting breaks up. No deal.

The seller will test several more traders before he chooses between accepting what seems to be today’s price or coming back another day. He knows that on Mondays and Thursdays, so long as this is Andkhoy, the traders will be here.

Andkhoy’s bazaar is described in fascinating detail in a report prepared for the World Bank. The authors, Adam Pain and Moharram Ali of the Afghanistan Research and Evaluation Unit surveyed the town’s carpet business over the years 2001 to 2003. 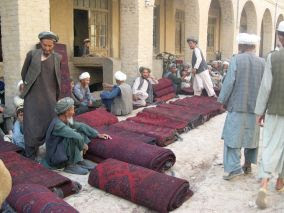 Their work offers a look into a world of sellers and buyers that few Westerners ever see as the famous red rugs of Afghanistan begin their journey to the outside world.

The men who come to the market are heads of Turkmen households that produce carpets on an independent basis. These families have the financial means to purchase wool on credit and usually have at least one other source of income such as land or livestock. They are the most successful producers because when they sell their carpet, they keep the full selling price.

How much can these independent weavers earn? The profit depends a great deal on the quality of wool they are able to buy.

If they weave with low-quality wool from Pakistan, Pain and Ali calculate (in 2003) that they will earn about $25 per square meter from a traditional red rug that sells in the United Kingdom for $250 per square meter.

But if they weave what is known locally as a ‘Biljeek,’ that is a rug woven with finer wool imported from Belgium, they can earn $58 dollars per square meter on a red rug that sells retail for $429 per square meter. 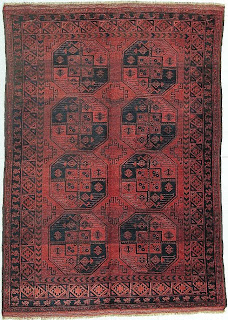 Pain and Ali estimate that about 10 to 20 percent of the weavers in the Andkhoy area are independent. The rest work under entirely different arrangements and, in fact, never come to the bazaar to sell at all. Instead, they work under profit sharing or wage-labor contracts.

A minority of the profit-sharing weavers --like the independents -- still produce the Turkmens' traditional repeating ‘gul’ designs or more recent varities of red rugs such as Khal Muhammadi or Mauri. Exporters’ agents provide them the wool and the dimensions and the weavers get 50 percent of the rug’s local market value.

But today the majority of local weavers (the researchers estimate 50 to 70 percent) work under labor contracts and produce carpets that have no local roots at all. Agents give them some $35 per square meter (for a carpet that retails for $549 per square meter) and wool from the Mideast to produce Chobis that have a modified Indo-Persian design.

The Chobis -- which ironically use natural dyes while the ‘traditional’ local designs use chemical dyes - strongly resemble the commercially successful Zieglers produced in northern Persia by Western firms in the early 1900s. 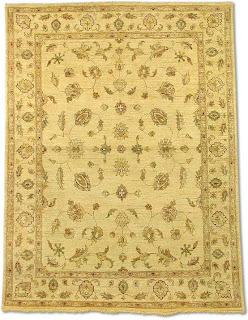 Pain and Ali say that Chobi production, which originated in the Afghan refugee camps around Peshawar, came to Andkhoy as the refugees – both Turkmens and Uzbeks -- returned home.

The contract-labor terms pay as well or better than profit sharing and minimize the weavers’ risk. That makes it attractive to poor weavers even though the agents commonly reduce the final wage payment if they find the slightest flaws.

Pain and Ali note that there are clear economic benefits as the contract weaving joins sharecropping and agricultural labor as the mainstays of people too poor to own land or livestock.

But the authors also sound a warning.

They observe that the happiest position for artisans is when retail customers recognize their work as the expression of a unique artistic heritage and willingly pay more for it than they do for generic goods.

However, if generic weavings become what Afghanistan is best known for, they say, "there is little hope at present that Afghanistan’s carpets will be able to achieve that position."

Understanding Markets in Afghanistan: A case study of carpets and the Andkhoy carpet market, by Adam Pain and Moharram Ali

Habibullah Kerimi Making a Life and Rugs in Exile

Barry O’Connell: Guide to Rugs and Carpets of Afghanistan

Emmett Eiland: Afghan Rugs and Carpets - Rugs from Afghanistan
Posted by Tea and Carpets at 07:40

Here's a great Afghan rugs article which gives an overview of the best carpets being made in Afghanistan today.

That's a fascinating article actually. Do you happen to know where the whole report by Pain and Ali might be available for the general reader?

While reading your blog it seems that you research on this topic very much. I must tell you that your blog is very informative and it helps other also.
modern furniture for living room

TWENTY us today for an affordable quote on oven cleaning budget friendly Brisbane! We have a committed Oven cleaning gold coast group of expert staff available, prepared to transform your stove.