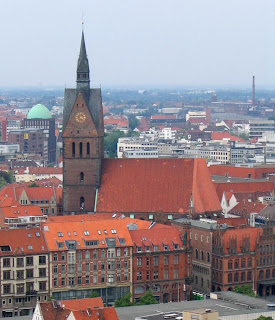 HANOVER, January 23, 2009 -- This time of year in Hanover, northern Germany, the sun barely appears before 8:30 and is gone by 4 pm. And all day long the North Sea wind hurtles into the city with nothing to stop it but the giant flags flapping over the city's sprawling fairground.

Still, hundreds of carpet producers and importers come here, bringing tons of oriental rugs from every corner of the world. They crowd into the fairground's hangers, employ an army of muscle men to stack the carpets in chest-high piles, and wait for thousands of European wholesalers to buy them.

The vast oriental souk is 'Domotex,' the carpet world's biggest trade show, and lasts for four days. During that time, producers and buyers strike contracts worth millions of euros. And they exchange information about everything from what retail customers want today to what they will buy tomorrow.

The talk is always a lively mix of business hopes and fears. But this year it is mostly about one thing: the economic downturn. All the producers, from Turkey, to Iran, to India are feeling the collapse of the housing market in the West because sales of home furnishings and carpets connect directly to the sales of new homes. 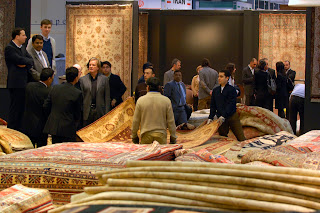 The connection is simple enough. When people buy new homes, they like to decorate them. But now the housing market slump that began in America is reverberating across Europe and people are trying to save or sell properties, not buy new ones.

Many producers predict the economic downturn will further polarize the carpet world into high-end and low-end producers. Mid-range producers, already under the stress of rising labor costs, could find it increasingly difficult to stay in business.

Habib Bayat is one of the partners of the high-end producer Bayat Nomad Gaminchi of Tehran and Los Angeles. He takes a moment to consider the trend as he and his daughter, who is also a carpet designer, show buyers their new collection.

The company’s stand, like those of the other top-quality producers at the fair, is a glass-walled enclosure that affords some refuge from the bazaar-like hubbub around it. Inside, like a showroom, the walls are hung with luxurious carpets in rich natural colors. One of them is already marked sold. It will be packed up by the muscle men and dispatched to a home on the other side of the world: Denver, Colorado. 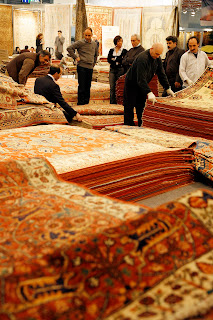 Bayat says that the market downturn comes as many Iranian producers are struggling to retain weavers. “In the last three years, our pay to weavers has gone up two and-a-half times,” he says.

Even at the best of times, he notes, producers, cannot pass on such a sharp increase to the market. Now, with the economic downturn, the higher volume of sales that producers depend upon to offset higher costs becomes harder to achieve.

Why are weaving costs going up in Iran?

Bayat says there are two reasons.

One is an out-migration of weavers to other jobs, creating a bidding game among producers for the weavers who remain.

“In Iran, young people are influenced by what is on television, so girls don’t want to weave carpets,” he says. Instead, they want jobs in factories or in agriculture. People regard factory work as modern and guaranteeing a future – an image that traditional work does not have.

The second reason for rising costs is inflation. In Iran, inflation is in double digits, consistently cutting into the buying power of the rial.

Bayat, whose smaller rugs sell at $700 a square meter wholesale, serves a luxury niche that is unlikely to flee to lower-cost products. But even his company cannot afford to be passive. It stakes its future on a natural dye plant it built near Shiraz 16 years ago. To date, the plant has developed a palette of 140 vegetable dyes. That means continual R&D costs but gives the carpets a clear competitive advantage as they show off as many as 25 natural colors at once.

Most mid-range Iranian producers have no such strong capabilities to keep customers from looking for lower-cost alternatives. So, they worry, and one glance around Domotex is enough to see why.

All over the trading floor, there is a rising tide of competitors from India and China – weaving powerhouses that are able to make technically sound copies of Persian carpets. They can pass on their own lower domestic labor costs to consumers, and many consumers do not require Persian carpets to be woven in Iran. 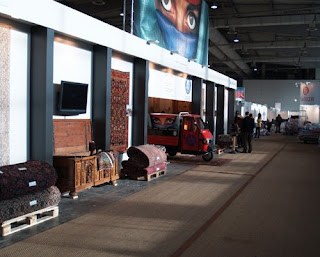 At another stand, the Hamburg importer and exporter Djavad Nobari covers the floor with its specialty: over-sized Persian carpets. For two generations, the company has supplied 12-meter square rugs for European dining rooms and living rooms. But now, big rugs are not selling like they used to.

Shahin, one of the younger generation of the family-owned business, gives some statistics. “Four years ago, we brought 60 to 70 12-meter carpets to the trade show,” he says. “Now, we bring just 20 to 30.”

The biggest sizes that sell readily now, he adds, are 9-meter-square rugs. He says that reflects the slowing market – “2006 was the last great year” – and changing lifestyles. More and more European homes have high-gloss laminated floors that look nice with smaller, accent carpets. The days of covering dull, scuffed floors with room-sized rugs are ending.

Shahin, who was born in Germany, is fully in tune with European customers. So much so, that the current market downturn does not worry him as much as a longer-term cultural trend: the fading interest in oriental carpets among young people.

"The biggest problem in the Persian carpet trade is marketing,” he says. “We don't show customers how good a carpet can look in their homes.”

On his computer, he displays what he hopes will be the answer. It is a series of advertisements depicting contemporary living rooms with oriental carpets on the floor. The combinations are striking, including a curvilinear white Nain beside a geometric chrome and black-leather sofa.

It’s no longer enough for retailers to put a picture of a rug in the newspaper with their company logo over it, the dealer says. Carpet sellers have to make owning a carpet desirable -- desirable enough to weather market storms. And the current storm may be just the time to begin.

Domotex
Posted by Tea and Carpets at 09:16

I am really satisfied with my oriental carpet. If everyone could be as customer focused as you, life would be so much easier. Very easy to use.

Hello! I just would like to give a huge thumbs up for the great info you have here on this post. I will be coming back to your blog for more soon.

Great Blog and Very Interesting blog and tahnk for sharing it and we also provide you Ac repair in Delhi NCR and all over the India services are there. Get best deals for the services or repair.Ac Repair in Delhi
cooking range repair service in rawalpindi